Iranian journalists and social media users closely watch events in Sudan, as the former ally transitions to a new era. 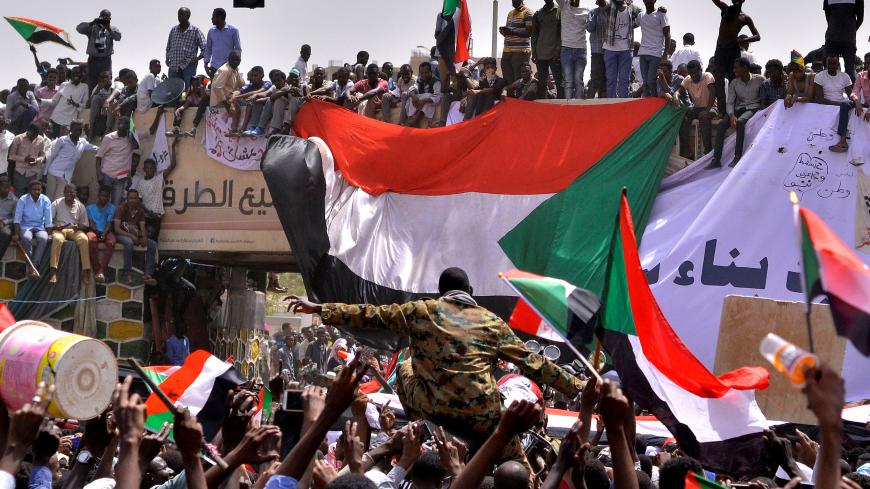 A military officer is carried by the crowd as demonstrators chant slogans and carry their national flags, after Sudan's defense minister said that President Omar al-Bashir had been detained "in a safe place" and that a military council would run the country for a two-year transitional period, outside the Defense Ministry in Khartoum, Sudan, April 11, 2019. - REUTERS/Stringer

Given that Iran’s alliance with Sudan came to an abrupt end in 2016, Iranian officials have opted for a diplomatic silence when it came to protests in the country over the last four months. However, among Iranian journalists and on social media, there has been a spectrum of reactions to the Sudanese military’s announcement that President Omar al-Bashir, who has ruled the country for 30 years, has been taken into custody.

A number of Iranian media outlets called it a "coup" when the Sudanese defense minister announced the army's takeover of major media channels and its intent to administer the country under a two-year transition period. Iranian activists online welcomed the news that the Sudanese army would free all political prisoners. Mehdi Mahmoudian, a Reformist activist, tweeted, “Hopefully, before it is too late, instead of Sudan, this news is published about Iran.” Another popular Iranian tweep wrote that, when it comes to long-serving leaders in the region, Iran’s Supreme Leader Ayatollah Ali Khamenei, having ruled for 30 years, is now “at the top of the leaders-for-life in the world,” following Bashir's arrest.

For three decades, Sudan and Iran had close relations. However, in 2016, Sudan cut ties with the Islamic Republic and expelled Iranian diplomats after joining the Saudi-Emirati war on Yemen. Sudan had a number of reasons for this turnaround, according to a January Rai al-Youm article. Chief among them were US economic sanctions. Sudan hoped that by turning away from Iran, the sanctions would be lifted. Sudan also reportedly hoped that joining the Saudi-led coalition in Yemen would result in substantial Saudi financial aid. Bashir is also said to have believed that, by leaving the Iran-led “Resistance Axis,” the International Criminal Court would drop the genocide charges against him. Few to none of these things panned out. Yet the United Arab Emirates reportedly managed to have Sudan removed from the Donald Trump administration’s so-called Muslim ban.

Ultimately, Bashir’s strategic realignment did not work out, nor was the economic pressure on his country relieved. Instead, in another maneuver, he became the first Arab leader to visit President Bashar al-Assad since the beginning of the Syrian civil war. The December 2018 visit was rumored to be the first step toward reintroducing Syria — Iran’s closest Arab ally — back into the Arab League.

Sudan’s turn against Iran was seen as a lesson by some Iranian analysts and reporters. “Bashir passed up on Iran and participated in the Yemen war … in hopes of receiving petrodollars," tweeted one journalist. "Those days are gone and as a result of widespread economic crisis and protests, he was removed from power through a military coup.”

Another Iranian journalist summed up Iran-Sudan relations with a famous Iranian saying: “Politics has no father or mother.” He further wrote that when Sudan was committing crimes against humanity during the war in Darfur, “it was a horse that Iran would bet on. When Saudi dollars made it a partner in the crimes in Yemen, [Sudan] was no longer dear to Iran. Goodbye, Bashir and hello to three months of state of emergency and two years of military council government in Sudan.”