For the first time, judicial notification and papers in Gaza will be delivered by a private company. 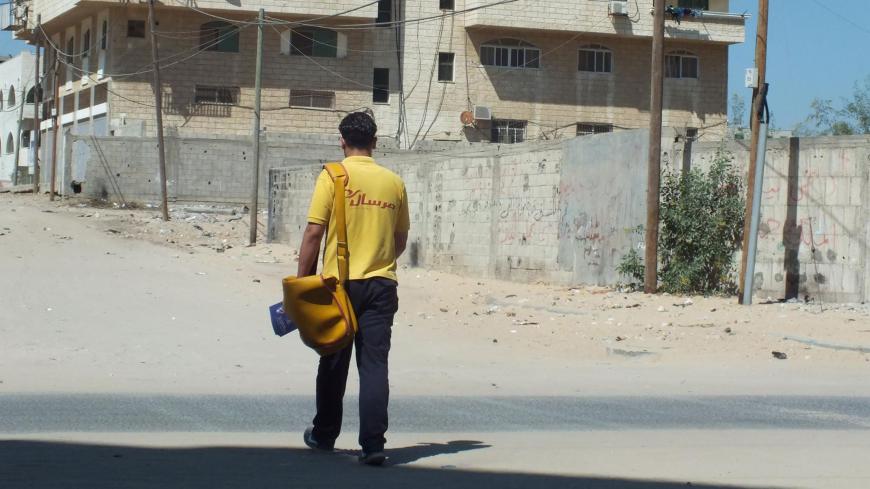 On April 4, the Ministry of Justice in Gaza signed an agreement with Mersal, a Palestinian private distribution and logistics company, entrusting it with a task previously assumed by the judicial police.

The head of the High Judicial Council in Gaza, Mohammed Abed, said in an April 4 statement posted on the Justice Ministry’s website, “The aim of the agreement is to expedite judicial notification procedures and shorten litigation duration.” He added, “The failure to notify a litigant on time delays the litigation process. Judges would only start the proceedings after ascertaining all parties are duly notified.”

Jaouni told Al-Monitor that his wife had filed for divorce. He said he was surprised that a man wearing a jacket bearing a Mersal badge handed him the order. Jaouni added, “I signed the document stating that I received the order and paid 5 shekels ($1.38), while the fee [was lower] before.”

Hassan Murtaja, the director general of administrative affairs at the Ministry of Justice, told Al-Monitor that the agreement between Mersal and the Ministry of Justice is based on High Judicial Council recommendations resulting from an internal study carried out by the ministry in 2017. The study examined the implications of delay in cases and considered solutions to speed up the litigation process and solve the problem of accumulated cases in the Gaza courts.

“The study showed that cases were being deferred amid citizens’ failure to respond to court notifications and allegations of non-receipt of these notifications. Moreover, some notifications are delivered late by the judicial police members, who [sometimes] do not know the exact address of the defendants,” Murtaja said.

The study recommended a switch to a delivery services company to ensure that citizens receive notifications promptly.

Privatizing judicial notifications, as Murtaja calls it, guarantees the timely delivery of notifications. “Litigants will be notified by e-mails that they will be receiving paper notifications from the company,” he added.

He said the agreement with Mersal will free police to do more important work. “Mersal staff will assume this task — which required human and logistical resources that cost the government a lot of money — easing the burden on police agencies. Under the concluded agreement, Mersal’s staff would guarantee notification of judicial papers in return for a share of the notification fees paid by citizens to the court’s fund to which citizens pay fines and litigation costs.”

“The agreement will run for two years that could be renewed,” Murtaja said.

The agreement stipulates that judicial papers are to be delivered within a maximum period of three weeks if recipients are abroad (Mersal contacts family members in the Strip to do so) and within a shorter period inside the Gaza Strip. Murtaja continued, “Mersal undertook to keep confidential the information obtained from the Ministry of Justice and not to disclose or exploit said information without the ministry’s prior written approval.”

The director of logistics at Mersal, Zuhair Sakik, told Al-Monitor that he is bound by a confidentiality clause and cannot disclose any information about the agreement with the ministry.

He said the effective implementation of the agreement was scheduled for April 17 after the company met all the conditions agreed upon in the agreement. These include allocating the necessary staff, providing a specific uniform, logistical equipment and a judicial notification software program.

However, implementation was postponed by the Ministry of Justice to April 21. Murtaja said the delay was due to financial protocols between the courts and the intermediary bank to which the courts' fund will transfer Mersal’s share from the proceeds of the notification fees; this is three-fifths of the payments.

Employees at the High Judicial Council told Al-Monitor that the judicial notification fees were increased by 3 shekels to become 5 shekels for each notification request.