A social club in Gaza has organized a one-time event to give a yoga session for paramedics who suffered psychological trauma during the latest Israel escalation. 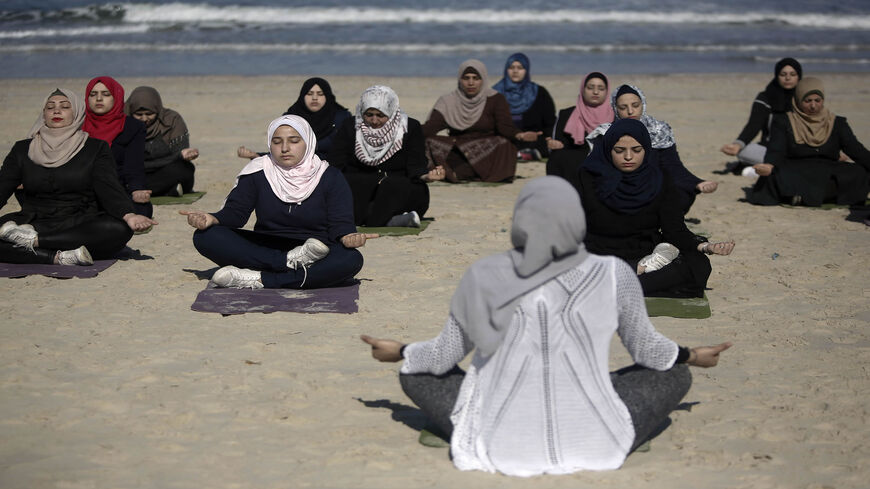 GAZA CITY, Gaza Strip — The Positive Energy Club organized a one-day yoga event for paramedics at the beach in the Gaza Strip on the International Day of Yoga, on June 21, aiming to minimize the consequences of the recent Israeli war on mental health. But the event has raised wide-scale criticism in the conservative enclave.

Yoga, which is a physical activity that contributes to emotional balance and mental comfort, is not very popular in the Gaza Strip or in Islamic societies due to its Buddhist roots.

In 2019, the Positive Energy Club was established by a group of Palestinian youths in Gaza City with the aim to provide relaxation exercises to citizens.

Tahrir Murtaja, head of the Positive Energy Club’s board, told Al-Monitor that the club and the Indian Embassy in Ramallah “decided to hold a yoga event aiming to release the emotional distress resulting from the war, given the role of yoga in relieving stress and releasing traumas that Gazans have been subjected to.”

She said that the event targeted paramedics and civil defense staff due to the pressure they were placed under during the latest war. She said that emotional release activities usually target women and children, and rarely focus on this segment of the population.

“The [Indian] embassy required the participants at the event to wear a white shirt with the logo of the embassy in Palestine,” she said, adding that the event was initially scheduled to include 25 paramedics and 25 members of the civil defense. However, the civil defense canceled their participation.

Murtaja noted that ambulance crews and emergency personnel worked under pressure and under constant shelling during the latest escalation, and they saw firsthand people getting killed and wounded, which made them the most in need of such activities.

“We realize that it is a small number, but the budget provided by the Indian Embassy determined the number of participants. But we are the ones who chose the target group of the event,” she said.

She added that they failed to convince the Health Ministry in Gaza to hold the event given the controversy it generated. The ministry’s mental health department said that they already have special emotional release programs targeting ambulance personnel, and that this yoga activity contradicts the ministry’s policy and plan.

Eventually, the club got official approval to hold the event from the Ministry of Health’s media department.

Murtaja said that Gazans in general rejected the event, especially after photos of the activities circulated on social media. They denounced the participation of paramedics at the event and criticized its organizers, considering that yoga is a forbidden activity that contradicts the teachings of Islam.

“They demanded to turn to prayers instead of yoga for psychological release. Who said that yoga is an alternative for prayers?” Murtaja said.

She explained that the psychological pressure that Gazans felt has negatively affected their behavior and morale, and stressed that practicing yoga is a good way to release stress, achieve mental balance, control breathing and achieve peacefulness of body and mind.

Murtaja said the club asked the embassy to hold this type of yoga event on a regular basis, given the positive feedback from the participants.

“The Indian Embassy suggested giving a yoga training class in India to a Gazan team, so as to familiarize Gazans with this physical activity, practice yoga and teach it the right way,” Murtaja added. (The idea was postponed because of the coronavirus pandemic.)

Awad Abdel-Bari, director of Al-Istiqlal Sport Academy and yoga instructor who gave the yoga session at the beach, told Al-Monitor that the event was designed to allow paramedics to release their negative energy and give them the ability to live in a positive environment.

Abdel-Bari, who learned yoga remotely with the International Yoga Federation in India, indicated that members of his club, which also provides yoga sessions, tried to travel to participate in the World Yoga in India event in 2018 and 2019, but they did not receive travel permits from Israel.

“Gazans do not believe in the role of yoga in improving their morale, but we are trying to spread this culture that is forbidden from their point of view,” He said. “We practice yoga as a sport, not as a religion.”

He noted that the participants at the beach event responded quickly to the exercises, although they were initially afraid of this activity and its ability to improve relaxation and balance.

Naseem Hassan, who participated in the event, told Al-Monitor, “I wished to practice yoga for a long time. I have heard about it for years, but I did not know anything about it.”

Hassan said that he was happy to take part in the event and that he hopes to do it again when there is an opportunity, despite the criticism.

He added, “We were subjected to harsh criticism from the Health Ministry and social media activists, who accused us of practicing forbidden Buddhist rituals. The Health Ministry opened an investigation into the participation of ambulance personnel in the event.”

Hassan believes, however, the event was held in the wrong place and time — at the beach at 8:30 a.m. with participants focusing on how to avoid the scorching sun, rather than focusing on the yoga exercises. The session was only 60 minutes and this was not enough time to do the exercises in a relaxed manner.

He noted that the war left a negative impact on the psychological health of ambulance personnel, and that he could not see his children for 11 days. He said, “We worked under the shelling without knowing whether or not our destination would be hit again.”

Hassan noted that he is trying to minimize the negative impact of the war by going to the beach and meeting with friends and family. He accused the Health Ministry of failing to help paramedics release psychological pressure despite the important role they assume in Gazan society.