Is Yoga Halal for Turks?

Much discussed in the Muslim world since the 1990s, the question of yoga and Islam has finally confronted a rather confused public in Turkey. 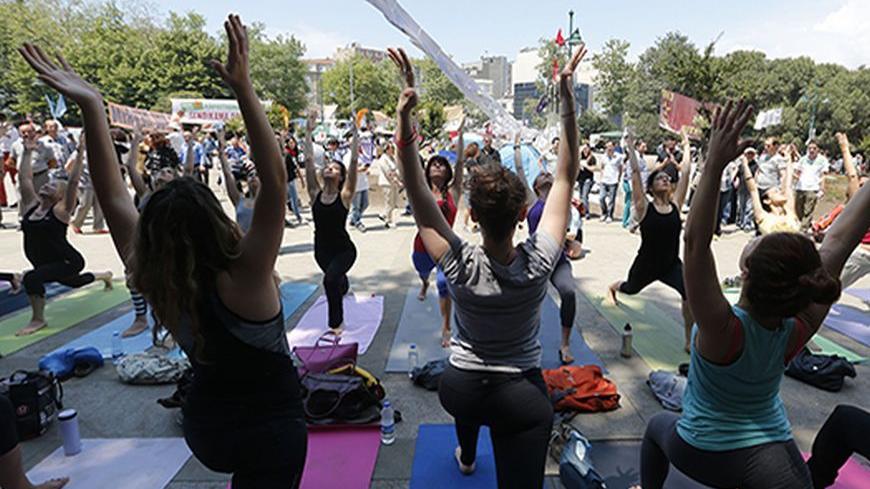 Print and social media boomed with news on Oct. 25 that Turkish Interior Ministry sought the official opinion of the Directorate of Religious Affairs (DRA) on whether yoga is caiz (not explicitly forbidden by Islam). News reports suggested that the cause of the inquiry was the Interior Ministry’s desire to provide yoga classes for the overstressed police force. The DRA replied as long as yoga was practiced as a sport activity it was permissible, but if it has a “religious mission” it could be objectionable.

I should provide the disclaimer that I have been practicing yoga more than 10 years. Although the news caught many Turks by surprise, as someone who studies religion, I'm quite familiar with statements such as “kosher yoga,” or questions such as “Is yoga sinful for Catholics?” I am also happy to confess I have friends who would never step foot in a yoga class because they do believe it is a sin, and they are not exclusively Muslims. On the other hand, I have attended “women only” yoga classes where no men were permitted and some participants were Orthodox Jews or hijabis (women dressed in accordance with Islamic law). The Muslim world has been debating whether yoga is an aberration for two decades-plus now.

I talked to quite a few licensed yoga instructors for Al-Monitor, many of whom preferred to stay off the record. They agree upon two statements: They have never viewed yoga as a religious belief system, but rather a philosophical state of mind; and that the popularity of yoga is growing exponentially in Turkey. It is estimated that there are over 50 studios just in Istanbul. A young yoga instructor, who was proud to lead a yoga session during Gezi park protests, told me over the phone that yoga clientele is becoming more diverse. He said soon we should expect classes for kids, pregnant women and women going through osteoporosis.

Ayca Gurelman, the founder of the Istanbul Yoga Center, is a pioneer for holistic yoga in Turkey with an impressive resume. She has travelled extensively, studied and practiced yoga in different continents, including its birthplace, India. Gurelman also has founded Purnam Publications, which publishes books on different yoga practices. Gurelman told Al-Monitor her center represents S-Vyasa University. She explained short, medium and long-term goals of someone practicing yoga. We agree that except for the few, most of us who practice yoga are only interested in short and medium term results: better health, less pain, stronger body and calmer mind.

Gurelman clarified their practice has no connection to “Hinduism.” She compared yoga to a good night’s sleep — you're rejuvenated once you complete your session. Gurelman told Al-Monitor most of their clientele are women aged 20 to 50. They're college students, professional women as well as housewives. She said: “We have not had any negative reactions from the observant Muslims, to the contrary we have some hijabi students. If there will be male students in the sessions we inform them accordingly. We do not differentiate between religious identities but we are sensitive to everyone’s wishes and beliefs.” Gurelman’s most intriguing explanation was that a type of yoga “Bakthi” indeed encourages one to “engage in his own religion.”

I have also had the opportunity to talk to a few practicing Muslim women about yoga. The hijabi friends who were willing to talk but didn't want their names used. One said: “I prefer yoga to be a private time for me, I do not feel the need to share it with the world.” Most of them attend a studio regularly, none of them view yoga as a religion, and all were perplexed when this was questioned by the Ministry. One told Al-Monitor: "We only do the poses and try to control our breathing to have a healthier life,” another added, “even my mother joined us and the hip opening moves relieves her sciatica, but I do it as a part of a regimen of resistance training, cardio and yoga; Islam encourages exercise.”

Trying to put all this into perspective I sought the opinion of Hilmi Demir, associate professor of theology from Hitit University in Ankara. Demir told Al-Monitor, “We first need to question whether yoga is used as an escape route for internal peace by Muslims.” Demir said: “As long as yoga practice is stripped of its spiritual and metaphysical aspects, it cannot be considered haram. However, this does not mean yoga is in synch with the kind of person, society, world that Islam seeks. Therefore, rather than asking the question whether yoga is halal or haram, maybe we should question why Muslims seek relaxation in yoga.” On Twitter, no one questioned the issue from this perspective, but most Turks were focused on the “fatwa” (religious decree).

One Turk, alluding to the “halal sex shop,” tweeted: “so DRA is now questioning yoga, which means helalyoga.com is on its way.”

Popular columnist Hayko Bagdat wrote, “I better check with the Patriarchy. This is yoga, no joke,” highlighting his Armenian identity.

Another columnist, Ismet Berkan, tweeted sarcastically, “I cannot even sit crossed legged, so I cannot practice yoga, and never be a master yogi, but still I am curious”

With more than 100,000 followers, Berkan wrote, “so if I tried to spread the 'belief of yoga' police will take me into custody? Whatever happened to freedom of religion.”

Berkan’s question highlights a crucial aspect of the case because most Turks were busy dealing with the “fatwa” from the DRA and not many questioned why the Interior Ministry sought an official inquiry into yoga and Islamic permissibility. Should the Central Bank of Turkey seek an answer from DRA about riba (charging and paying interest, which is banned in Quran)? What is stopping the Ministry of Family and Social Policies from questioning if polygamy is permissible? I cannot find any fault at DRA for answering the question in accordance with the rules of Sunni Islam. It's normal that public and ulama should discuss whether yoga is permissible but it is wrong that this discussion is initiated by the government.

This is not “creeping Sharia,” but rather an unchecked bureaucracy seeking the approval of their top leadership through Islamic salvos with no rhyme or reason in the state traditions. As Demir succinctly put it, DRA — and hence Turkish state — has been awfully pragmatic in declaring what is halal what is haram, while DRA can boldly state “Alcohol is the mother of all evil,” they fail to repeat a similar statement for riba –which is considered haram clearly in the Quran. The “official” fatwa-makers of Turkey continue to dominate the public debates, but the real question is why tax payer money and government employees’ precious time are being spent on an inquiry as such and how does this inquiry enhance our religious  freedom?

Pinar Tremblay is a doctoral candidate in political science at University of California Los Angeles and an adjunct faculty member at California State Polytechnic University, Pomona. She has previously been published in the Hurriyet Daily News and Today's Zaman. On Twitter: @pinartremblay