Efforts to reach a reconciliation agreement between Hamas and Fatah have failed, and the dichotomy separating judiciaries in the West Bank and Gaza Strip is growing. 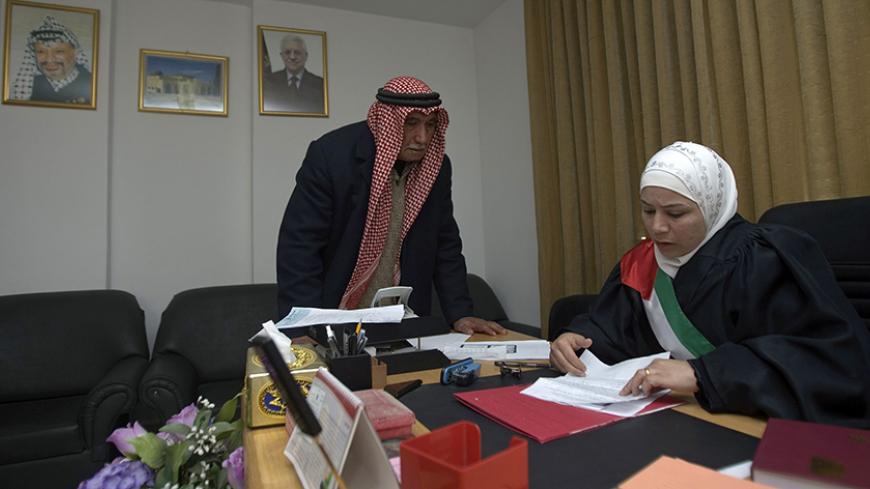 GAZA CITY, Gaza Strip — Since Hamas’ takeover in 2007, the Gaza Strip has been governed pursuant to a legal and legislative system completely separate from that of the West Bank. The reconciliation agreement signed between Fatah and Hamas in April 2014 and the subsequent formation of the Rami Hamdallah-led Palestinian unity government formed in June 2014 failed to unify the legal and legislative systems of Gaza and the West Bank, where new laws continue to be separately and independently drafted.

After its takeover of the Gaza Strip — which caused a significant disruption in the work of the Gaza judiciary and courts — Hamas established in 2007 a Supreme Judicial Council and a Public Prosecutor’s Office, and appointed a special prosecutor, Ismail Jaber, who was replaced two years later, completely separating them from their counterparts in the West Bank.

Hamas’ Change and Reform bloc within the Legislative Council holds separate meetings in Gaza and has so far drafted 50 laws that only apply to the Gaza Strip. President Mahmoud Abbas has issued more than 100 decrees that have solely been implemented in the West Bank following the split from Gaza in 2007, when the Legislative Council — in which Hamas won an overwhelming majority during the 2006 general elections — was stripped of its authority.

The reconciliation agreement stipulated, in addition to the formation of a unity government, that the Legislative Council be revived. However, disputes between Hamas and Fatah put on hold the implementation of all agreed-upon issues, and forced Hamas members of the Legislative Council in Gaza to independently resume holding sessions, with the National Solidarity Tax Law being the latest to be adopted.

The director of the legal studies unit at the Al Mezan Center for Human Rights, Adnan al-Hajjar, said that the West Bank and Gaza have had two completely distinct legal systems since the split. According to Hajjar, this has led to citizens losing confidence in the Palestinian judicial and legislative apparatuses as a whole. “We are facing a catastrophe engendered by the split in the Palestinian legal and legislative systems, for in the West Bank and Gaza 150 new laws have been passed — 50 of which are being implemented in Gaza and 100 were issued by the president and implemented in the West Bank,” he told Al-Monitor.

Before the establishment of the Palestinian Authority in 1994, the Gaza Strip fell under the purview of Egyptian laws, while the West Bank was subject to Jordanian laws. The first legislative council formed in 1996 endeavored to unify those laws, and the Palestinian judiciary was unified.

The Gaza Strip is experiencing an exceptional situation following the formation of the unity government, headed by Hamdallah, as per the Fatah-Hamas 2014 reconciliation agreement. Hamas still holds the reins of the government, and the Palestinian government does not have any legal authority on the ground. Both movements insist on adopting their way to solve problems, namely addressing the outstanding issues and unifying institutions.

Judge Ashraf Nasrallah of Gaza’s Supreme Court indicated that the present political atmosphere was the main obstacle standing in the way of unifying the Palestinian judicial system. “We are facing political obstacles in the integration of the judiciary," he told Al-Monitor. "The issue is neither technical nor legal. The Gaza Strip needs the services of currently serving judges, supplemented by those whose jobs were terminated after the split, because their current numbers are not sufficient to adjudicate the backlog of court cases.”

According to Nasrallah, Gaza currently employs 45 judges and about 250 support staff who receive their salaries from the Hamas-controlled Gaza Ministry of Finance, with each of those judges hearing 40-50 cases a day.

The Supreme Judicial Council in the West Bank refuses to merge Gaza judges appointed after the split with those in office prior to the split, stipulating that they relinquish their posts and surrender their courts, with new judges taking exams that would decide their entry into the judiciary.

Judge Abdelqader Jaradeh, who works at the Gaza Courts of First Instance and was appointed prior to the split, said in this regard, “We must restore unity to the judiciary and not merge and unify the judiciaries of Gaza and the West Bank. All problems resulting from the split can be addressed once the Supreme Judicial Council restores its control over the judiciary in Gaza. The split changed all procedures. For now there are laws that exclusively apply to Gaza or the West Bank … and joint companies operating in those jurisdictions are confused as to which courts have jurisdiction to hear their disputes. The Supreme Judicial Council must be the only body authorized to appoint the necessary number of judges.”

Since the split, the judiciary has faced innumerable problems that hindered its duties, particularly in Gaza, affecting access to fair trials for citizens.

Gaza-based lawyer Islah Hassanieh wrote in a paper, referring to the situation in Gaza: “The sudden upheaval suffered by the judiciary, public prosecution and police force has led to the appointment of people lacking required professional expertise and competence, which, in turn, has had an effect on the interests and rights of citizens [in Gaza], due to the slow progress in finalizing their paperwork, and the flawed decisions taken with regard to their cases.”

Abdel Raouf al-Halabi, the chairman of the Supreme Judicial Council in Gaza, indicated that the problems faced by the courts have been exacerbated in Gaza following the formation of the Palestinian unity government. “The previous Gaza government provided courts with some resources, albeit insufficient to meet all needs," he said. "But since the reconciliation government assumed its duties six months ago, all resources have been withheld, and contacts are ongoing on more than one avenue to push the government into fulfilling its obligations toward the judiciary.”

In that context, local and international civil organizations have expended great efforts toward restoring unity to the Palestinian judiciary. Those efforts, however, came to naught in the absence of the suitable political will by decision-makers in the West Bank and the Gaza Strip.