Egypt’s spring flower exhibition, the oldest in the region, unites flower producers with the public but the sector is eager to go beyond borders. 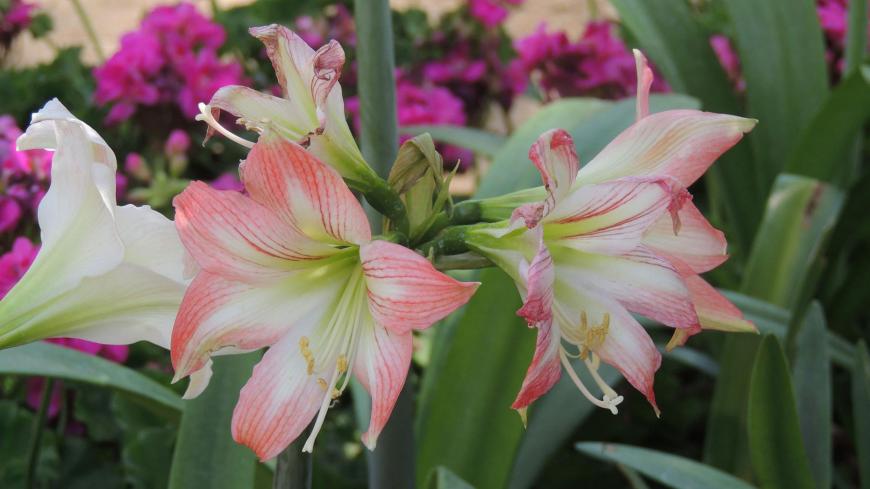 The Orman Botanical Garden in Giza turns into a giant flower show in late March every year. Sweet-smelling jasmine shrubs, huge sunflowers, aromatic herbs and minuscule succulents are put on display in an area of 14 feddans (14.5 acres) during the 45-day exhibition that aims to showcase, motivate and support the country’s flower producers.

The 86th edition of the exhibition was opened March 21 by Agriculture and Land Reclamation Minister Ezz el-Din Abu Steit, with some 180 Egyptian and Arab producers displaying their flowers and plants.  One million visitors are expected to tour the premises this year, the minister said.

The exhibition, the oldest and biggest flower show in the Middle East, aims to spread the culture of ornamental plants and flowers in Egyptian society and beyond, Abu Steit noted.

Speaking to Al-Monitor, Khaled el-Sayed, the chairman of Blooms Company, said the exhibition is one of the industry's major annual events. His company exhibits a large selection of indoor and outdoor plants, fruit trees, seeds and gardening supplies. Blooms Company also showcases diverse medicinal and aromatic herbs and plants.

Sayed said that the price of flowers sold at the exhibition ranges between $0.15 for spring blooms and $50 for rare and exotic plants. "We grow our plants at Shubra el-Kheima in Qalyubiya governorate,” he noted, adding that the company also owns greenhouses that grow rare plants.

Despite the government's declarations to boost the floral industry, flowers take a backseat to other crops when it comes to agricultural policies, Sayed said. The top priority in the country, unsurprisingly, is wheat and cotton. “In 2015, the Egyptian government announced that it would increase Egypt’s farmlands by 1.5 million feddans [roughly 1.6 million acres].  But there were no aromatic and medicinal plants and herbs among the plants that were given priority,” he noted.

Sayed believes that the floral industry can play a major role in boosting exports and employment if prioritized and subsidized. But the industry also needs to get organized, he said, adding that he has suggested to the government to establish a local sales and export flower market in the New Administrative Capital, near Cairo.

Blooms Company exports flowers across the Arab world, especially to Saudi Arabia. “We hope that we will find a gateway to more markets," Sayed said. He noted that Egypt can become an important regional hub for the floral sector due to its location and easy access to foreign markets. "Egypt can export to the European Union and Asia," he added.

Sherif Fayyad, professor of agricultural economy at the Desert Research Center, a state body affiliated with the Ministry of Agriculture, told Al-Monitor that Egypt exports aromatic and medicinal plants to 40 countries, basil and chamomile topping the list.

"Egypt enjoys a wide range of elements that can help double its floral products. The country has a good, sunny climate throughout the year. It also has skilled workers in the sector,” he said, adding that despite all those advantages, flower production has been suffering from random cultivation, lack of financial support by the state and the absence of professional organizations that would lobby collectively for the improvement of conditions.

"Such plants grow naturally without any human intervention in the Sinai Peninsula. These plants can also be used in producing perfumes and cosmetics. However, in Egypt, we only have one large perfume factory," Fayyad noted.

Fayyad pointed out that Egypt has rare products that could be of interest to the perfume industry, citing as an example jasmine wax paste, which comes from the Nile Delta village of Shubra Balula. The so-called Village of Jasmine, 93 miles north of Cairo, is the top producer of this substance used in perfume and cosmetics in Egypt and around the Mediterranean.

“Jasmine flowers is Egypt's neglected wealth. I hope [events like] the flower exhibition can help draw more attention to this promising industry," he concluded.