Turkey’s state of emergency ended last year, but its victims continue to suffer, with many entertaining suicidal thoughts or aspiring to leave the country, according to a recent survey. 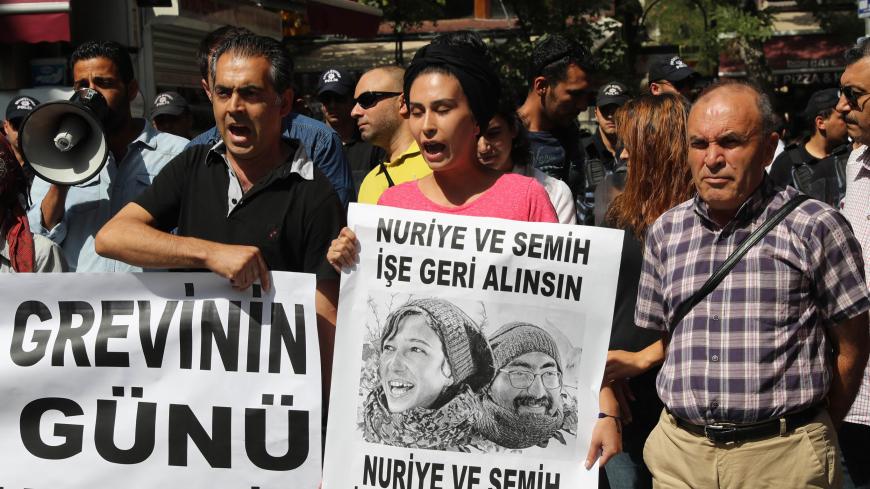 The state of emergency declared after the July 2016 coup attempt in Turkey ended in July 2018, but the victims of the massive purges that followed continue to suffer from the fallout. Some 135,000 people were expelled from public service during the two-year emergency rule and, according to Justice Ministry figures, half a million people have faced some sort of judicial action.

In a bid to shine light on the social toll of the state of emergency, a team of 50 researchers, headed by sociologist Bayram Erzurumluoglu, have conducted interviews with 3,776 people, including individuals who were expelled from their jobs via legislative decrees, their relatives and others who were affected indirectly by the crackdowns. A report detailing the survey was recently presented to the public by Omer Faruk Gergerlioglu, a lawmaker for the pro-Kurdish Peoples’ Democratic Party.

According to the survey, 95.3% of those expelled from public jobs said they experienced major economic hardships, 86% said they were ostracized by their social circles and 84.6% said they struggled with psychological problems as a result. Some 83% said they were still jobless.

One interviewee, for instance, said, “I’m a teacher — that’s my area of competence. I couldn’t do anything after my working license was taken away. No place would employ me and I worked as a porter. My family treated me as a criminal. Acquaintances and neighbors stopped greeting me. I was left to a social death.”

Another interviewee described how the expellees were stigmatized as members of the Fethullah Terrorist Organization (FETO), the officialese for supporters of US-based preacher Fethullah Gulen, who stands accused of orchestrating and carrying out the coup attempt. “We woke up one day to see the words ‘FETO-ers, f*** off from here’ inscribed on our car,” the interviewee said.

According to the report, many of those expelled from their jobs also suffered from serious health problems. Forty-five of the respondents said their existing or new illnesses had advanced, while 14% said their children developed health problems. Another 4% said they or their spouses suffered miscarriages due to stress.

Six percent of the interviewees said that they or a family member had attempted suicide, while 1.2% said they knew someone expelled via a legislative decree or a relative who committed suicide. An individual who had suicidal thoughts said, “I cannot stop thinking how I wish suicide was permissible in Islam. I left home three times to commit suicide, but I couldn’t do it.”

According to the survey, 92% of the victims said they most struggled in their efforts to obtain justice. Eighty-three percent said they were hopeless about their future, while 95% and 90% said they had lost trust in the state and people in general, respectively. “I’ve lost all my faith, values and my trust in and compassion toward people. I don’t know if there is anything worse than that,” an interviewee was quoted as saying.

The feelings of mistrust are coupled with a widespread desire to leave Turkey. Asked whether they would go to another country if they could, because of the traumas they endured, 83.9% of respondents answered in the affirmative. According to the survey, 9.9% of the victims had attempted to leave Turkey, but many said they did not try because of judicial decisions banning them from traveling abroad.

Some made it abroad illegally. One individual, who remains abroad, described crossing by foot the Maritsa River between Turkey and Greece, “slogging through mud and barely escaping drowning.” In Greece, “I was on my own, all alone. I didn’t speak a foreign language and had no idea what to do. I went to Athens and then to Norway,” the interviewee said. “I stayed in camps for a year and half, living half-hungry and wearing ragged clothes. I collected expired food from groceries.”

Why did those people brave death to embark on such dangerous journeys? Another person interviewed abroad said that the only alternative was to live “jobless and under the constant risk of torture, while being insulted time and again in front of your children and family. … We’ve committed no crime. We hit the road in pursuit of an honorable and free life.”

Unemployment, economic hardships, apprehension over an uncertain future and social pressures have caused many families to fall apart. According to the survey, 41% of the respondents said their families had disintegrated, either because of divorce or the flight of a spouse abroad. One percent said they had children taken into state custody.

The report concludes that the state of emergency had a devastating impact on the rule of law in Turkey. “The state of emergency and the measures enacted afterward via legislative decrees have completely turned Turkey away from being a state of law and made it a state where no one has legal security,” the report says. According to the report, the two-year emergency rule created 250,000 direct victims, in addition to 1.5 million people affected indirectly. The far-reaching impacts, it warns, might lead to serious crises across the country.

What should be done? The report, which Gergerlioglu sent to all political parties and the government, calls on Ankara to immediately abandon the practices inherited from the state of emergency and return to the principles of the rule of law. “It is a sociological fact that countries devoid of law have never been able to produce peace, tranquility and prosperity. To think otherwise amounts to knowing nothing about the world’s social and political history.”