The severe economic and social penalties imposed on thousands of Turks after the July coup attempt mean that nearly 1 million people, including family members, have been condemned to “civil death.” 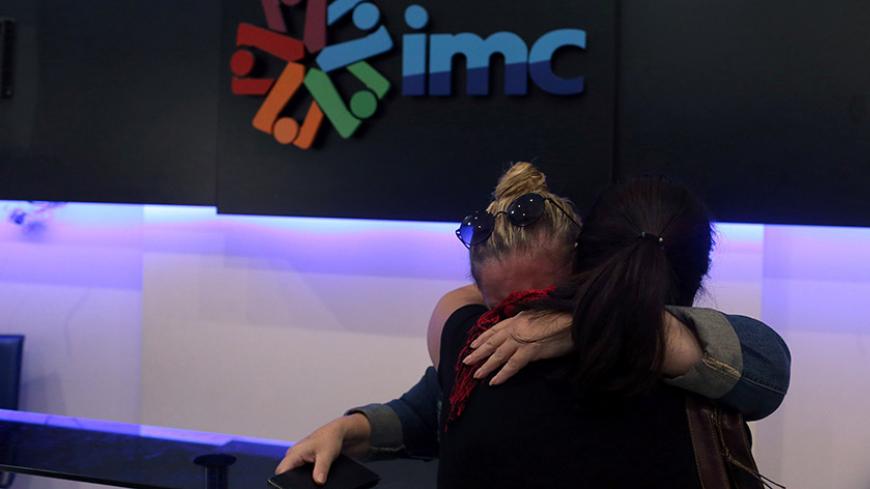 IMC TV employees react after their broadcaster's transmission was cut by authorities, based on a government decree, at IMC TV studios in Istanbul, Oct. 4, 2016. - REUTERS/Huseyin Aldemir

The bans and restrictions the Turkish government has imposed over the past four months under the state of emergency have resulted in tens of thousands of people shut out of social and economic life in what virtually amounts to “civil death.” Journalists and lawyers who lost their jobs after the July 15 coup attempt are now subject to legal and de facto work bans, which have produced a long list of victims.

Those affected by the emergency rule measures can be divided into two major categories: people who face judicial investigations and people not being judicially prosecuted but nonetheless directly or indirectly victimized by the measures. The latter category includes people dismissed from private enterprises closed for their alleged affiliation with Fethullah Gulen — the supposed mastermind behind the attempted putsch — and those who lost jobs in the public sector on the same grounds or for being active in oppositional trade unions.

Some 11,000 teachers and 50,000 other public servants were dismissed after the coup attempt, and most of them are now grappling with unemployment. A former village teacher, for instance, described his plight to a media outlet. He said, “I’ve been married for five years. I’m ready to work, even as a porter, but no one would give me a job, as the Syrians are working for very low wages. We feel desperate and don’t know what to do.”

Academics expelled from universities find themselves in a similar situation. One of them, sociologist Kemal Inal, told Al-Monitor, “All the entitlements I had acquired from work of more than 27 years vaporized with a single decision by the government. I’ve sent CVs to dozens of places since I was expelled on Sept. 1, but I’ve heard back from no one. Perhaps they are scared.”

Inal said his family is under severe financial strain, because his wife, a teacher, was also dismissed. “Going abroad was my only way out,” he said. “I had applied to a number of universities to work as a lecturer, and one of them offered me a three-month position. But then my passport was canceled, and I couldn’t go abroad. I’m totally cornered.”

The number of people who lost their jobs in the private sector is not known. On Oct. 19, the Human Rights Association reported that 1,061 private schools, 15 private universities, 113 student hostels and 35 hospitals and medical centers had been shut down. In addition, hundreds of companies have been seized and are now being run by government-appointed trustees. The government has created a social security code that enables it to track people who lost private sector jobs and are now back in the labor market.

A physician from Izmir whose hospital was closed for alleged links with what Ankara calls the Fethullah Gulen Terrorist Organization (FETO) experienced firsthand how the tracking works. Speaking on condition of anonymity, he told Al-Monitor, “I looked for a job for quite a while and then found one at a private hospital. The day I was supposed to start, I was told [the hospital] couldn’t enter me into the social security system. We called the social security agency, and they said that I was the subject of an ongoing inquiry and that the system would allow my entry only after the inquiry was completed. So I’m still jobless.”

Hundreds of other staff from the same hospital are yet to receive their severance pay and other financial entitlements. According to a government regulation, the entitlements of the staff of closed institutions are supposed to be paid within six months. Another former employee of the hospital, who is owed back pay and severance for 11 years of employment, said, “We’ve been told we’ll receive those once the inquiries are completed. They are examining whether we are FETO members or not. We are supposed to be reimbursed accordingly.”

The probes in question are not judicial investigations, and the procedure by which the Social Security Institution is conducting these “inquiries” remains a mystery. On Sept. 27, the Justice Ministry said that 70,000 people were the subject of some sort of judicial action. Since then, the figure is estimated to have reached 100,000, given that the clampdown has continued unabated.

Actual judicial investigations have been marred by questionable practices. According to one legislative decree enacted under the state of emergency, lawyers who are themselves the subject of investigations cannot represent others facing similar investigations. At first glance, this might seem like a measure to prevent lawyers from collaborating in coup trials. Yet the maiden application of the provision demonstrates how broadly it is being employed.

When Mehmet Ozdemir, a leftist, was detained in Istanbul on Aug. 22, lawyers from the Istanbul branch of the Progressive Lawyers Association (CHD) attempted to assume his defense. The court, however, banned the lawyers from the case, citing a lawsuit against the CHD dating back to 2013. In short, the provision serves to sideline lawyers facing investigations involving their profession and restricts the right of defendants to choose their attorneys.

The media have faced similar restrictions on top of the already ferocious crackdown on independent journalism. A circular issued by the Press Advertisement Institution requires public agencies to stop advertising in newspapers whose proprietors are indicted on terrorism-related charges. The same applies to media outlets that employ journalists indicted on terrorism-related charges.

On the judicial front, more than 3,670 judges and prosecutors have been expelled from the profession, and about 3,000 of them have seen their assets frozen as part of ongoing investigations. The law allows for property seizures only of assets acquired through a criminal act set out in a court ruling. Under the state of emergency, however, the scope of this measure, too, has been broadened.

The more than 30,000 people awaiting trial behind bars have faced a series of additional sanctions, ranging from property seizures and restrictions on meetings with lawyers to the dismissal of their spouses and children from public service.

In all cases, the sanctions have targeted people whose prosecution has not yet been completed as well as some who are not the subject of judicial investigation at all. Kerem Altiparmak, a legal scholar at Ankara University’s Faculty of Political Science, has warned against the grave impact of sanctions against people for whom no concrete evidence exists linking them to the coup attempt. Depriving these people of their economic and social rights for life “infringes upon the essence” of fundamental rights, which the constitution explicitly forbids.

Altiparmak also wrote, "Dismissing people from public service through lists [incorporated into] legislative decrees constitutes a grave violation of the republic’s basic tenets laid out in Article 2 of the constitution. Turkey cannot sustain forever this practice, which condemns people to 'civil death' in violation of universal norms protected also by international law. If this method is not reversed politically, it is bound to be reversed legally sooner or later. The government therefore must urgently drop unlawful methods in favor of weeding out [Gulenists] through transparent and fair investigations that respect the public’s right to know the truth. If it fails to do that, not only tens of thousands of people will be victimized, but the struggle against FETO will come to naught."

The current state of affairs offers little hope, however. An estimated 1 million people, including the families of those affected by the investigations and dismissals, appear headed for bleak futures.