With Turkey's imminent local elections, the opposition camp is split between hopeful optimists and cynical pessimists. 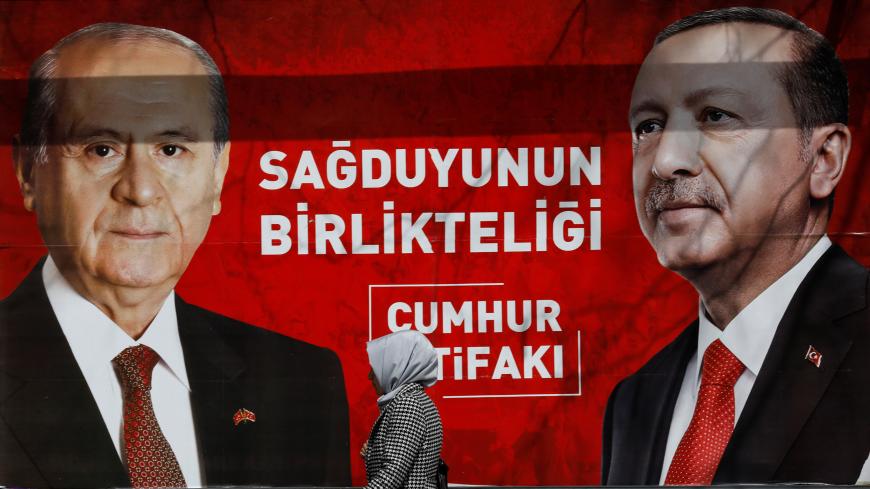 A woman walks past a banner for the upcoming local elections, Ankara, Turkey, March 27, 2019. - REUTERS/Umit Bektas

Turks are addicted to going to the polls. On Sunday, they will go once again.

They did it twice in 2015: The June parliamentary election didn't give President Recep Tayyip Erdogan the support he would need in two years to pass the constitutional amendments required for his executive presidency ambitions. So he called for snap elections — a do-over. He got the results he wanted Nov. 1.

In 2016, Turkey’s polarized society was extremely busy with the developments unfolding in the aftermath of the July 15 botched coup.

In 2017, people lined up to vote on the constitutional referendum to change the country from a parliamentary democracy to an executive presidency. That was followed by the presidential and parliamentary elections in 2018.

Turkey, since 2015, has successively passed through a frenzied campaign for Erdogan's referendum and for the elections that further polarized the country.

Until recently, the general elections coming March 31 were being considered comparatively insignificant, given the extensive powers Erdogan acquired in June 2018, which left the parliament basically just a rubber-stamp institution.

However, with the date fast approaching, many now think it likely that the ruling party and its nationalist ally will lose the capital city of Ankara and Istanbul — the showrooms of Turkey.

Moreover, Erdogan might also lose a number of other major centers including the Mediterranean coastal provinces of Adana, Mersin and Antalya, and the northwestern province of Bursa — an industrial center and the fifth-largest city in the proximity of Istanbul.

The pro-Kurdish Peoples’ Democratic Party (HDP) — with a voter backlash against the repression it faces — could win the southeast, which is mainly Kurdish. Some believe this would spell the beginning of the end for Erdogan’s autocratic rule.

These provinces include Diyarbakır, Van and Mardin — where elected mayors were pulled from office, imprisoned and replaced with government-appointed trustees.

Those who are hopeful of a Kurdish victory point to the advent of Erdogan's rise that began in 1994 when he was elected to be Istanbul's mayor. Back then, he had run on the Islamist Welfare Party ticket. The party also won Ankara the same year, and quasi-Islamist mayors have run both of the cities since then. Therefore, the loss of Istanbul and Ankara for Erdogan could halt his reign, according to some. They think “it all began with local elections; the end will also begin in the same way.”

The March 31 local elections involve 81 cities and almost 1,000 towns. Controlling most of them means controlling the patronage that has provided Erdogan’s vehicle — the Justice and Development Party (AKP) — and keeps it running.

Erdogan has infused extraordinary energy into the campaign. He has even employed the cheap political tactic of whipping up religious and nationalist fervor against New Zealand and Australia. At election rallies, he has shown graphic footage taken by the native-Australian terrorist who perpetrated the March 15 massacres in two mosques in Christchurch, New Zealand. During these rallies, he has criticized both countries for failing to protect Muslims.

This indicates just how worried he is about his political future.

Erdogan is equally anxious regarding the economy. Inflation dropped slightly in February from January but has been hovering around 20% for several months. Unemployment has been climbing steadily for almost a year, reaching 13.5% in December. The concern for the elections led Erdogan and his son-in-law, who is in charge of finance, to take unprecedented measures to keep the US dollar/Turkish lira parity unchanged until the election date. As a result, "The cost of borrowing liras overnight on the offshore swap market in London soared past 1,000% at one point" on March 27, Bloomberg reported.

“By engineering a situation whereby there isn’t enough lira liquidity for investors to move in and out easily, Turkish authorities have averted a currency slide before a March 31 vote that’ll determine who governs Turkey’s cities,” Bloomberg said. “That’s good for Erdogan, who’s already contending with a recession, soaring inflation and opposition parties trying to undermine him. But it comes at the cost [of] inflicting huge pain on the investors he needs to sustain the economy that consistently needs to fund current-account deficits."

It's not difficult to deduce that after March 31, Turkey can expect further economic and financial difficulties. A deepening economic crisis that could end in implosion can't be ruled out or trivialized as an April Fools' Day fluke.

Yet despite all the indicators that Turkey is on the verge of a major economic crisis and a new political process that might signal the waning days of the Erdogan era, there are also people who are prudent to caution that no significant change should be expected from the local elections.

According to them, the “new regime” in Turkey is designed to prevent Erdogan from losing an election. They believe Erdogan will do everything in his power to maintain his autocracy. To confirm their point, Erdogan and his notorious Interior Minister Suleyman Soylu have provided sufficient evidence. Both affirmed that in the case of unwarranted results, they won't hesitate to expel the people elected and appoint trustees in their stead.

“Erdogan certainly seems weaker than at any other time [since he became prime minister in 2003], but that does not mean he is at risk. He and the AKP have controlled Turkey for almost two decades, and as a consequence, they control the press, control state resources and control the political process at every level,” Steven Cook, an author and senior fellow at the Council on Foreign Relations, wrote March 26 in Foreign Policy.

“So Turks can fairly ask themselves, ‘Is there any alternative?’ The answer is a resounding no. The Turkish president is running hard and saying shocking things because he is an outstanding politician. He treats every election like it is his last, and he is 10 points down in the polls with a week to go. It is tempting to wager on an AKP loss. Observers have been predicting the party will get its comeuppance or that it will split for at least the three [local, parliamentary and presidential] elections. It may yet happen, but not this time around. And so the transformation of Turkey continues,” Cook added.

Turks will wake up to elections results April 1. It remains to be seen if the results will be appropriate for April Fools' Day. Whether the outcome confirms the hopefuls’ expectations or the pessimists’ view, the election will no doubt mark a milestone in Turkey’s political process.