Syria's displaced are creating small towns after having been forced out of their hometowns. 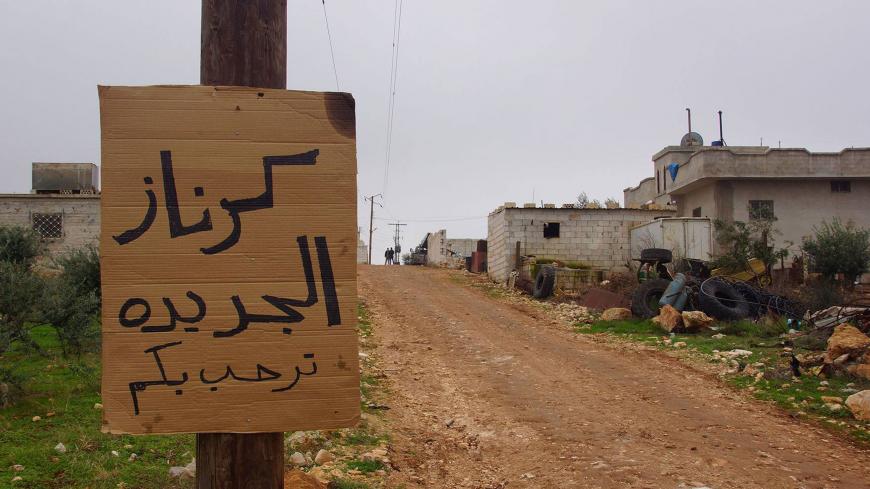 A sign saying "Welcome to New Karnaz" at the entrance to the newly built village in Idlib, Syria, Dec. 18, 2018. - Facebook/Enab Baladi 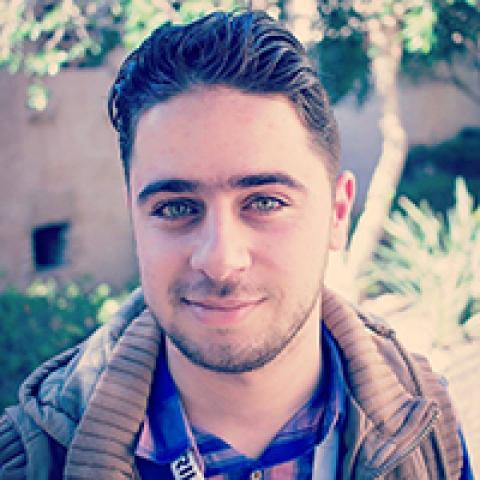 Mahdi al-Daman has been on the move for five years, fleeing from one place to another. He bought a small plot of land in the town of New Karnaz recently, where he pitched a tent. He hopes to build a house, however, that would shelter him and his family from the cold.

Daman, from the town of Karnaz in the northern countryside of Hama, fled his hometown when the Syrian regime took control of it in 2013. He took flight in one of the camps for internally displaced persons along the border with Turkey.

Daman has now returned to settle in New Karnaz, a newly built town that is akin to his hometown. The town is one of several villages in southern Idlib countryside that is built by the displaced.

Since the beginning of 2016, eight new small towns have been established in the countryside of Idlib, inhabited by the displaced from Hama and Rif Dimashq, which is currently under the control of the Syrian regime. The area has a population of nearly 8,000 people, according to nonofficial figures from activists there and heads of local councils.

Some of the newly founded villages bear the same names as the original ones, while others are named after Syrian cities with similar geographical features.

Three years ago, a group of displaced residents from Karnaz bought a plot of land from landlords in the southern countryside of Idlib. They built New Karnaz and named it after their hometown that was taken by the regime forces, according to Hussein al-Warda, head of Karnaz local council. He told Al-Monitor that the price of 100 square meters (1,076 square feet) of land is about 150,000 Syrian pounds (roughly $291) in the area.

The town is gradually getting bigger with small and medium-sized houses that require a construction license. The new residents hire construction workers and acquire raw materials from opposition-held areas. About 100 families live in New Karnaz currently. But some, like Daman, have bought a small plot of land but still cannot afford to build a house.

Near New Karnaz, another small town, Mazraat Bloudan, has been built in a mountainous area by the displaced from the villages in the countryside of Hama and al-Ghab Plain.

“Our newly built town is located in a mountainous area akin to the Syrian village of Bloudan northwest of Damascus, in the Rif Dimashq governorate. Right now 1,050 people live here,” Mufid Chaiban, head of the Mazraat Bloudan community, told Al-Monitor. “Most of the residents had taken refuge in the camps along the Turkish border. We bought the land and built our own houses as we can no longer live in the dire conditions of the refugee camps.”

Construction in the town takes place rather randomnly. “There is no urban planning to create main services such as a sewage system, electricity or water grid,” Chaiban said.

New Karnaz, on the other hand, is regarded as one of the most organized new communities, with residents paving roads, creating streets, digging a water well and building a mosque. In addition, a school building is under construction. Warda said that the residents who have the financial means are paying for all this themselves after having lost hope to get assistance from the authorities or relief organizations.

Hafez al-Hamawi, who left his hometown of Qabr Fiddah in al-Ghab Plain and settled in Mazraat Bloudan, told Al-Monitor, “The biggest problem we face in our new community is the long distance from other cities and the center of Idlib countryside. We have to travel long distances to have access to basic services.”

The nearest school for Daman’s children is 3 kilometers (2 miles) away in the village of Abdin in the countryside of Idlib, and residents of New Karnaz have to travel 6 kilometers (4 miles) to reach the nearest medical center.

Barazi said that they had plans to coordinate with the council of Hama governorate and the local councils there in a bid to improve the situation of these new communities. However, the Syrian Salvation Government took over the entire opposition-held area in the countryside of Hama and Idlib in the past few weeks.

“We no longer have any say either in Hama or Idlib because we follow the interim government,” Barazi said.

Diaa Haj Ahmad, head of the local council of Maar Hurmah in Idlib countryside, told Al-Monitor, “These residential communities are randomly built, lacking urban planning and basic services. We appealed to human rights organizations to improve the living conditions of the people there in terms of sanitation and the provision of drinking water and electricity."

Despite the poor services in these new villages, Abu Hamza, from the town of Karnaz, is ready to buy a small plot of land in New Karnaz where his relatives already live. "New Karnaz may not have all the necessary basic services, but it is a much better choice than being on the move all the time with no place to settle and call home. The residents are the people of my city that is now occupied. We have the same memories,” he told Al-Monitor.