Russia expects to maintain footprint in Algeria despite unrest

In Moscow, the Algerian and Russian foreign ministers discussed the North African country's domestic political crisis, their mutual dislike for foreign intervention and the need to elevate bilateral ties. 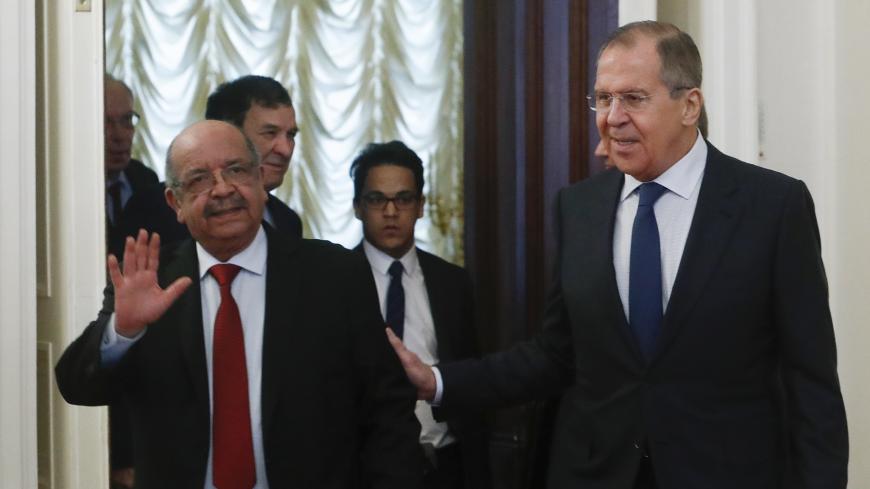 Ramtane Lamamra, the foreign minister as well as deputy prime minister of Algeria, visited Moscow March 19. His talks with his Russian counterpart Sergey Lavrov seemed like a conversation between two old friends who have a lot to reminisce about. However, at the final press conference the Algerian guest passionately describing the changes coming up in his country while the Russian minister remained solemn. Discussing the issues of Algeria, Lavrov maintained his objections to foreign powers intervening in the matters of other countries.

The topic of foreign intervention into Algeria’s internal affairs became Lavrov’s focus during the public part of the talks — the opening ceremony and the final press conference.

The first thing Lavrov said in greeting his counterpart was, “We are obviously concerned with the events currently taking place in your country. We see the attempts to unsettle the situation, and we strongly object against any intervention into this process. I can safely assume that the people and the government of Algeria are certainly capable of finding solutions based on the national constitution.”

During the press conference, Lavrov made similar statements in support of the plans Algerian government had drawn up to stabilize the situation.

“We expect them to help with the stabilization process in your nation, which Russia views as a close partner. The reconciliation should be based on the national dialogue held in accordance with the constitution of Algeria and, obviously, under the condition that all interested parties respect the norms of international law and the UN Charter,” the Russian minister said.

Lavrov has repeatedly cited the UN Charter, saying, “It is crucial that all other nations hold its requirements sacred to implement,” and deeming it "absolutely unacceptable to intervene into the internal affairs of sovereign nations.”

The minister has never specified who he believes is trying to meddle in Algerian matters. However, the gist of his press conference speech made it clear that he primarily meant the West. Lavrov’s statements expanded to include the entire region of the Middle East and North Africa.

For instance, his reply to a journalist’s question about comparing the current protests in Algeria to the Arab Spring was rather harsh.

“The Arab Spring, this poetic expression, turned out to be a blatantly ugly interference in the internal affairs of sovereign nations, such as Libya or Syria," Lavrov snapped. "The people of Algeria will solve their problems on their own. They will manage their national affairs based on their constitution and according to international law.”

Although the Algerian authorities often dwell on the topic of foreign interference, Lamamra was less eloquent on the issue than his Russian counterpart, simply pointing out that Russia and Algeria have common approaches to international issues.

“We are indeed friends. Algeria and the Russian Federation share common principles — respecting the sovereignty, territorial integrity and independence of all nations,” said the North African politician, adding that Algeria’s problems should remain within the country’s internal, domestic life, while acknowledging that changes are necessary.

Lamamra emphasized that it was actually young Algerians who had voiced the need for reforms in the political, economic and social fields, meaning that the unrest had not been caused by foreign intervention. This aspect, in Lamamra's view, means the leadership is in a position to work with the protesters and calm the situation. The Russian authorities, for their part, are wary of protests in general. At the same time, Lamamra looked to Moscow for support of the national dialogue projects the government had created. Russia strives to see such a prospect in every conflict-ridden place, from Libya to Syria.

The North African nation can safely assume that Russia will not have to mediate or otherwise intervene in the political confrontation. The Algerian minister did not ask his counterpart for anything and from the outside, the talks seemed to be a dialogue between equals. Lamamra did not get to meet Vladimir Putin, as the Russian president’s schedule at the time was too tight, and had to hand the message he brought from Algerian President Abdelaziz Bouteflika for Putin to Lavrov.

Nevertheless, Lamamra was pleased to visit Moscow, where, as he pointed out, his diplomatic career had started, and to talk with Lavrov, who had previously been his counterpart as a national representative to the United Nations. The Algerian politician mentioned that even though that period had been rather difficult, the two countries shared common views on international law and both he and Lavrov had repeatedly faced challenges together.

The diplomats agreed that the Russian-Algerian partnership, established back in early 2000, must be further developed. Algeria and Russia agreed to create a high-level action group of foreign ministers and their deputies to coordinate approaches to general international issues. This group will supplement cooperation venues that already exist, like dialogue between the countries' national security councils as well as action groups for cybersecurity. Lavrov specifically stressed “the expansive, deeply rooted military-technical cooperation between Russia and Algeria.”

Despite the urgency of political issues, the topic of bilateral cooperation was prominent as well. Algeria is one of Russia's principal partners among African and Middle Eastern nations, being the second-largest market in the region after Egypt. According to the statistics from the Russian Economy and Development Ministry, in 2017 the trade flow between Russia and Algeria amounted to around $4.6 billion. However, more than two-thirds of it involved military equipment. Another 30% includes ferrous metals, vehicles and industrial equipment ($1.3 billion). During the negotiations, both ministers “commended the successful work” of the Mixed Intergovernmental Commission for Trade, Economic, Scientific and Technical Cooperation that had met in Moscow in January and the Intergovernmental Commission for Military-Technical Cooperation that had gathered in the Russian city of Tula in October 2018.

In the last 12 years, Moscow and Algiers have signed contracts amounting to $10 billion in total. The largest was concluded in 2006. In exchange for forgiveness of its debts to the Soviet Union, Algeria bought 28 Su-30MKA and 34 MiG-29SMT fighter aircrafts, 16 Yak-130 jet trainers, three S-300PMU-2 missile systems, 38 Pantsir-S1 anti-aircraft weapons, 185 T-90S tanks, 216 Kornet-E anti-tank missiles, eight Krasnopol guided artillery systems and two 636M submarines. All supplies were purchased successfully except for the MiG-29SMT installment, which Algeria refused, presumably due to quality issues.

Later, Algeria purchased more than 120 T-90S tanks (200 more were constructed locally), 30 Su-30MKA fighters, 42 Mi-28NE and six Mi-26T2 helicopters. The most significant deal took place in 2017, when Russia supplied Algeria with a brigade package of Iskander-E ballistic missile systems. The North African nation thus became the second country to receive this weapon after Armenia had purchased it a year earlier.

According to the Kommersant newspaper’s sources in the Russian military industry, the high level of military-technical cooperation has stemmed directly from Bouteflika’s views and decisions.

“We find it crucial that the next Algerian president continue the practices established by Bouteflika. This market is highly promising, and many actors are ready to drive us out of it,” one source said.

Something else Russia considers significant is that Algerian elites maintain long accepted views in other fields, from foreign policy to trade and coordination with Russia in the world gas market.

There is still hope that the contacts will be maintained, not only because the old elites stay in power, but also due to Russia’s intensively promoted stance of noninterference in the Algerian conflict. It resonates not only with the Algerian authorities but also with the protesters. Like many other young people across the Middle East, some of the young Algerians who spoke to Al-Monitor said they actually appreciated Vladimir Putin as a strong national leader. Moscow will likely exploit that point of view to maintain its position in Algeria.