Despite Russia's very different relations with Algeria and Morocco, Moscow takes pains to treat them the same. 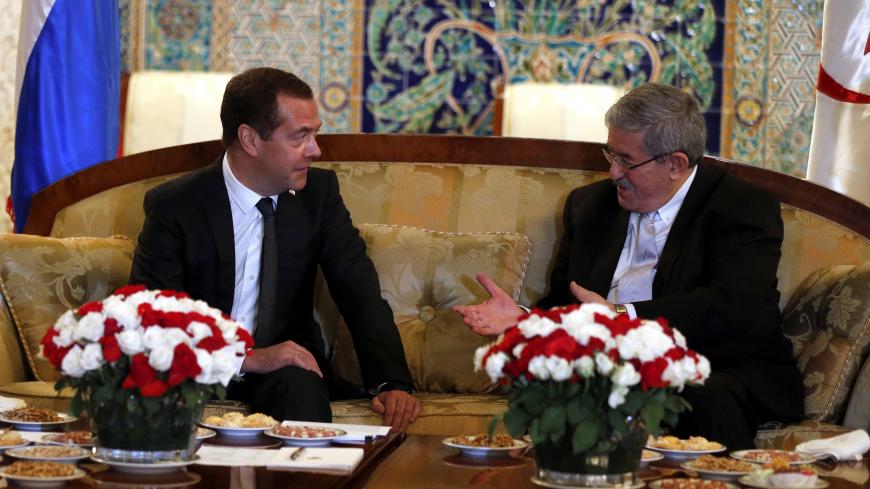 In Morocco, Medvedev was conferred an honorary doctorate from Mohammed V University. Speaking of prospects for the bilateral relationship between Russia and Morocco, Medvedev quoted the movie "Casablanca," saying, “I think this is the beginning of a beautiful friendship.”

He added, “The friendship between Russia and Morocco began long ago, and there is every reason to believe that it will only grow stronger and develop for the benefit of the peoples of both countries."

Should the Medvedev tour be seen as a manifestation of Russia’s new strategy? Its approach until recently barely extended over to the Arab world's “Far West." Is it a symptom of some internal changes within the Russian political apparatus, given that Medvedev has been largely preoccupied with domestic affairs, whereas foreign policy and especially the Middle East were very much in the domain of Russian President Vladimir Putin?

Neither of those scenarios appears to be the case.

Medvedev's visit didn’t come out of the blue. A Russian diplomat with knowledge of the visit's details told Al-Monitor both Algeria and Morocco had been put on the prime minister’s travel schedule at least six months ago, with intense preparations across several ministries ever since.

He has long been engaged in Algeria. In 2001, Russia and Algeria signed an agreement on a strategic partnership. For the next 16 years, economics and — to a larger extent — military-technical cooperation have come to dominate the bilateral agenda. By 2016, the annual trade turnover between the two countries, according to Medvedev, amounted to $4 billion — the lion’s share of which came from Russian weaponry. More than 90% of Algerian arms are exported from Russia. Algeria's annual exports to Russia are limited to several hundred million dollars.

In an interesting diplomatic twist, this trip marked a reunion of sorts between Medvedev and an old confrere. In 2010, when Medvedev was Russia's president, he met with Ahmed Ouyahia, who was in his third term as Algeria's prime minister. Just two months ago, Ouyahia was unexpectedly tapped to return to the position, enabling him to resume working with Medvedev.

Among the dozen documents signed during Medvedev's recent visit, the most notable included those on oil, gas and nuclear power development. Some sources reported the two parties might have discussed Algeria's potential purchase of Russian S-400 missile systems, and Su-32 and Su-34 fighter bombers, as well as the potential for Russian companies to manufacture trucks and bulldozers in Algeria.

As is often the case with senior Russian officials’ tours to the region, Medvedev’s trip to Algeria was combined with his visit to Morocco. Not only does the strategy make sense for logistical reasons, it's also designed not to offend either neighbor.

As with Algeria, Medvedev’s economic dealings with Morocco heavily dominated the agenda. Although the Russian-Moroccan trade turnover of $2.5 billion is much lower than that between Russia and Algeria, it has a different structure and is on a constant rise. With Algeria, the prevalent component is military-technical cooperation, but Russia’s trade with Morocco centers on agriculture, with a number of small- and medium-sized businesses being important players, which nurtures deeper bilateral ties. Also, trade relations between Russia and Morocco seem much more balanced than those between Russia and Algeria.

In Morocco, Medvedev signed a dozen accords, mainly in agriculture, but the parties also reportedly reached key agreements for Russia to supply liquefied natural gas (LNG) to Morocco. Last month, Russian Energy Minister Alexander Novak was also in Morocco, where he said that the construction of an LNG regasification terminal was underway and that the two states discussed gas deliveries by the Russian companies Gazprom and Novatek.

What can be called the “pedantic parallelism” that Moscow pursues in constructing relations with Algeria and Morocco likely indicates Russia’s unwillingness to dive into complex regional games in the Maghreb, and its aspiration to limit, by and large, its relations to an economic agenda.

Another indicator of Russia’s balancing act in the region is Moscow’s neutrality on the Western Sahara issue. Delegations of the Algerian-backed Polisario Front — the Sahrawi people of Western Sahara's movement for independence from Morocco — visit Moscow every spring, hosted by the Russian Foreign Ministry and the Federation Council (Russia’s Senate). Russian officials have always been careful not to make any anti-Moroccan statements. Algeria has accommodated Western Sahara refugees in camps for decades.

The “parallelism,” however, should not be misconstrued. Russia is perceived differently in Algeria and Morocco and occupies a different place on each one's list of foreign policy priorities.

For Algeria, Moscow has always been an important partner. From 1954-1962, the Soviet Union actively supported the country’s national liberation movement and the National Liberation Front, a socialist political party. Soviet universities educated future leaders of the Algerian military and a large part of the national intelligentsia. And when the Soviet Union began allowing cybernetics into its own academic curriculum, Algerians were among the first lecturers the Soviet leadership invited.

Today, the Museum of Modern Art of Algiers hosts a collection of both Soviet and Algerian artists who used to live in Russia. The “special relationship” between the two countries survived the downturns of the 1980s — against the backdrop of the crisis of socialism — and the economically rough 1990s. Moreover, the very nature of Algerian statehood makes its leadership refrain from an excessive rapprochement with Europe and keep an emphasis on its independence from its former parent state, France.

It’s a totally different case with Morocco. Its traditional association and cooperation with the EU, as well as the political familiarity between the Moroccan and Saudi monarchies, are all natural constraints to a more intimate alignment with Russia.

This background implies that no matter how skillful Russia is in its parallelism diplomacy, should Moscow have to increase its political involvement in the region it will need to further diversify its contacts with both countries. In Algeria's case, Russia is likely to actively develop humanitarian ties, to boost existing military-political interaction. With Morocco, Russia would have to place more emphasis on promoting economic ties to compensate for the lack of vibrant joint political formats.

That, however, is a matter for the future. So far, Medvedev's visits have demonstrated that Moscow is not forging a new Russian strategy in North Africa, but rather is naturally seeking to capitalize on its success in Syria and position itself as a main security supplier to the region.