The Palestinian Authority has dispatched a medical delegation to Venezuela to offer medical aid for one month, in a step it says is strictly humanitarian and not political. 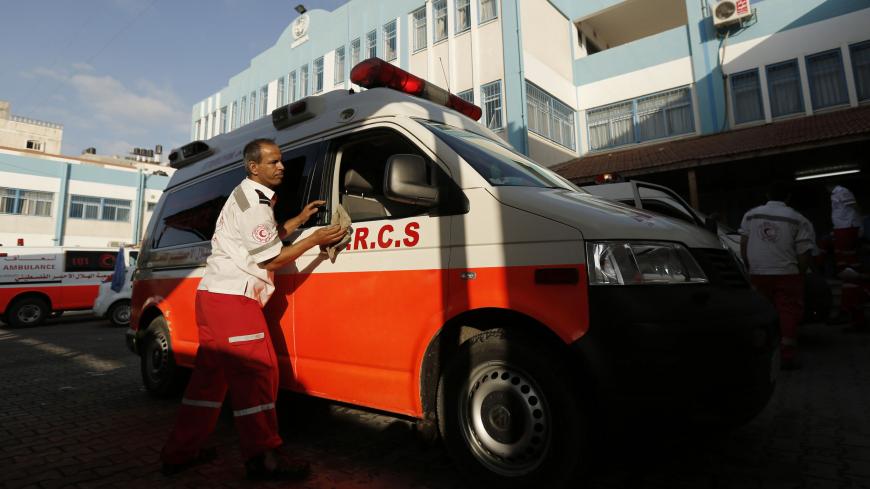 GAZA CITY, Gaza Strip — Despite a massive blackout that has plunged most of embattled Venezuela into darkness, a Palestinian delegation of doctors continued its efforts this week to provide aid in the capital of Caracas.

Sent by Palestinian President Mahmoud Abbas, a team of 16 doctors arrived Feb. 28 on a monthlong mission to perform free surgeries there, where a struggle for the presidency has thrown the country into chaos. The blackout struck March 7 and continued today, worsening the situation.

Venezuela has been embroiled in growing tension since Jan. 23, when opposition chief Juan Guaido declared himself acting president until new elections are held. Current President Nicolas Maduro was sworn in Jan. 10 for a second six-year term.

Maduro's government is reportedly blaming opposition extremists for the blackout, claiming they launched a technological and cyberattack on a hydroelectric plant. The opposition denies the accusations and claims poor maintenance and simple neglect led to the outage.

He told Al-Monitor the delegation is distributed over three hospitals in Caracas and, before the blackout, planned to carry out six specialized surgeries per day.

The doctors took with them medical equipment, medicine and medical consumables for the operating rooms and emergency departments, at the request of the Venezuelan Ministry of Health.

“The medical delegation’s mission comes as a message of loyalty to the Venezuelan people, and the leaders who stand with the Palestinian people,” Najjar said. “It is a humanitarian message to all the countries of the world that Palestine can offer support to any friendly country that needs support and assistance.”

He noted that Maduro has shown distinctive and supportive positions toward the Palestinian people. “We hope this medical delegation will be a message of support to him," Najjar said.

Western countries, most notably the United States, are recognizing Guaido as interim president. By sending a medical delegation to Caracas, the Palestinian presidency seems to be taking a stance opposing the Western inclination.

In a bid to pressure Maduro out of office, Venezuelan opposition chief Guaido vowed in a March 5 statement to paralyze the public sector in Venezuela. Maduro, replying that same day, countered: “No one and nothing — neither external nor internal aggression — can disturb peace in Venezuela."

The PA has historic relations with Venezuela, which has shown unwavering support and solidarity with the Palestinian cause. Venezuela’s support was mostly felt with the advent of Hugo Chavez to the presidency, which he held from 1999 to 2013.

“Venezuela and the Venezuelan people took an honorable stance and supported us at the United Nations and in all fields," said Abbas Zaki, a Fatah Central Committee member. "We maintain relations based on bilateral cooperation. Sending the medical delegation is a gesture of loyalty to return the favor to Venezuela, [which is] currently hit by an emergency situation."

According to the Venezuelan Association of Medical Doctors, some 22,000 physicians have left that country in the past five years. This has caused a shortage of specialized, intensive and emergency care.

Zaki told Al-Monitor, “Palestinians must be the peace dove. We send our best [physicians] to heal the wounds of our brothers in Venezuela.” He stressed the reliable relationship between Palestine and Venezuela. “When President Maduro was a foreign minister under Chavez, he expelled the Israeli ambassador in protest against the Israeli war on the Gaza Strip in 2009.”

Chavez officially recognized the state of Palestine in 2009 and inaugurated the first Palestinian Embassy in Caracas. Until his death in 2013 — when he was replaced by Maduro, who followed in his footsteps — Chavez never ceased to assert his support for the Palestinian people.

Writer and political analyst Raed Nairat, a political science professor at An-Najah National University in the West Bank, believes the PA is trying to depoliticize the message behind the recent medical delegation to Venezuela. The United States, however, can't help but see the PA’s aid as a political message, he added.

“The PA has been insisting ever since the Venezuelan crisis flared up that it is taking a neutral stance toward Venezuela and does not interfere in the complex Venezuelan situation. I don't believe the PA would put itself in a position against the US," he told Al-Monitor. “The PA has chosen to stand with the government of President Nicolas Maduro on a humanitarian basis only.”

On the possible US position toward the PA in this particular matter, Nairat wondered, “What can the US do? Washington has been adopting escalating policies against the Palestinians ever since Donald Trump became president.”

Fatah's Zaki said the PA can't rely on the US administration. “The US is all about deals and trading positions. The current US administration doesn't apply Woodrow Wilson's Fourteen Points and lacks George Washington's wisdom.”

On March 3, Zaki visited the headquarters of the Venezuelan Embassy in Palestine and met with Venezuelan Ambassador Maher Taha. The PA-affiliated Wafa news agency reported that during the meeting, Zaki expressed Palestine’s solidarity and support to the “friendly” Venezuelan people and Maduro. Meanwhile, Taha confirmed the unfaltering position of Maduro toward Palestinians. “Maduro sees himself as part of the Palestinian people,” Wafa quoted Taha as saying.

Walid al-Mudallal, a political science professor at the Islamic University of Gaza, told Al-Monitor, “The Palestinian medical mission must be understood within the context of humanitarian cooperation and relief. It falls within the framework of popular diplomacy and is part of the PA’s attempt to strengthen its mutual relations with Venezuela.”

He acknowledged that the United States could see the mission as a kind of counter-action and political position against Washington. But, he added, “the PA, for its part, can justify its actions as offering aid to the Venezuelan people."

In a Jan. 24 letter addressed to Maduro, Fatah slammed the interference of some countries in Venezuela's domestic affairs. On March 2, hundreds of Palestinians took part in a solidarity rally for Venezuela organized by Palestinian activists in the West Bank city of Bethlehem.

In a May piece on Wafa's website called "Venezuela illuminates the darkness of Palestine," the agency noted there are 10,000 to 15,000 Palestinians in Venezuela, most of them living in Valencia and Caracas. Venezuela allows Palestinians to enter its territory without a visa.