The recent furor over mismanaged scholarships to a Venezuelan medical school is further evidence that the Palestinian Authority takes advantage of foreign aid and grants while ignoring Palestinians’ needs. 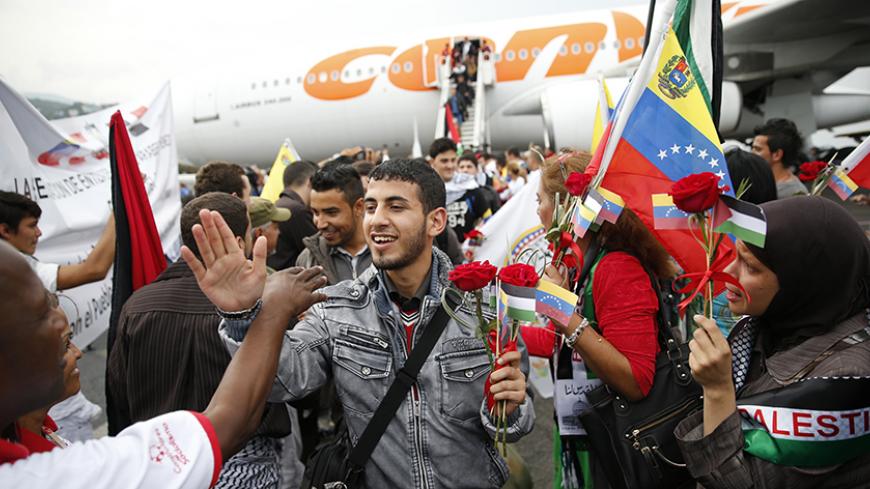 The Palestinian Foreign and Education Ministries and the Palestinian Embassy in Venezuela manipulated the dispersal of scholarships in a scandal Palestinians fear will negatively affect Palestinian-Venezuelan relations. The news broke on July 13, when the Venezuelan authorities decided to deport dozens of Palestinian students.

Palestinians found out about all of this when 25 Palestinian students who reside in Jordan arrived back to the kingdom after being deported. They protested Venezuela’s decision in front of the Venezuelan Embassy in Amman in July.

Some students behaved disgracefully at the Latin American School of Medicine in Caracas. Some brought their hookahs to school, while other attended class wearing pajamas and complained about the university housing. Some students also wrote offensive slogans against late Venezuelan President Hugo Chavez on the university walls, causing outrage in Venezuela.

The scandal prompted some Palestinian media outlets to accuse Palestinian officials of choosing students unfairly, as some of those awarded the scholarships had connections to PA employees.

The Palestinian Ministry of Higher Education had shared the requirements for the Venezuelan scholarships on July 19. These included a grade point average of 80% or above for high school students specializing in the science field and took into account the geographical distribution of Palestinian students in the West Bank and Gaza Strip and in Arab countries, and the candidates' financial status.

Al-Monitor found difficulties in reaching Palestinian students in Venezuela, but one student contacted who wished to remain anonymous revealed his disappointments with the scholarship.

“I was surprised that the courses were limited to Spanish-language [classes] and [included an] introduction to the socialist revolution in Venezuela,” he said, adding that the professors proposed a curriculum that focused on social health instead of medicine, raising his concern that “[Palestinian] education was not compatible with international standards for medical studies.”

On July 23, the assistant undersecretary at the Palestinian Education Ministry, Anwar Zakaria, admitted that some of the scholarship recipients were studying literature and not science, and some went to Venezuela in order to work or use Venezuela as a crossing into other countries. Zakaria added that some students even had grade averages below 80%.

The Venezuelan opposition used this scandal to its advantage when it attacked the president July 21. Although Venezuela is one of the PA’s biggest supporters, the PA fumbled in its poor management of a dossier that was supposed to be strictly educational.

Palestinian Foreign Minister Riyad al-Maliki tried to resolve the crisis. In a statement to Maan News on July 17, he said the corruption scandal was a fabricated story aimed at tarnishing the relationship between Venezuela and Palestine. At the same time, Maliki recognized that some students selected were not eligible for the Venezuelan scholarships.

A senior official at the Palestinian Ministry of Higher Education told Al-Monitor on condition of anonymity, “The main reason behind the scandal is that several parties were overseeing the selection of students to be granted scholarships, such as the Ministry of Higher Education, the Palestinian Liberation Organization and the Palestinian embassies abroad. Other reasons include a great level of favoritism, interference and corruption. Meanwhile, Gaza students are deprived of foreign scholarships, which the PA takes advantage of to further manipulate the selection process.”

The official added, “The Palestinian Embassy in Venezuela played its part in giving scholarships to those who do not deserve it. The selection process is not objective, but rather based on favoritism as some work their influence, such as the leaders of the PLO’s Executive Committee, members of Fatah’s Central Committee and the office of President Mahmoud Abbas.”

The Palestine Press news agency, which is affiliated with Fatah leader Mohammed Dahlan, revealed July 17 that Venezuela’s conditions for the scholarships required that students have a high school average GPA of over 80%; be specialized in sciences, not literature; and hail from poor families. But, according to sources speaking to Palestine Press, the poor students fell victim to the PA’s manipulations, as the scholarships were sold to failing students for $7,000 each.

Hamas spokesman Sami Abu Zuhri described the PA’s handling of the Venezuelan scholarships as “a manifestation of the PA’s corruption and disregard for the interests of the Palestinian people.” Zuhri told Al-Monitor, “Hamas condemns such practices that ruin the Palestinian relations with Venezuela, which is a friendly country supporting the Palestinians.”

On July 20, the Democratic Front for the Liberation of Palestine asked the PA not to allocate the scholarships to just one faction — a reference to Fatah — and not to grant them based on favoritism, as this negatively affects the Palestinians’ relationship with Venezuela.

The Islamic Bloc, Hamas’ student arm, declared in a July 21 press statement that the Palestinian officials involved had worked as brokers, cheating over 1,000 students out of their deserved scholarships through their corruption.

The scandal is yet another setback joining other difficulties already facing Palestinian students, thousands of whom dream of winning scholarships abroad and escaping the financial burden of attending university in Palestine.

On July 19, Gazan writer Mohammed Abu Mahadi spoke bitterly about the personal experience of his nephew Amjad Abu Mahadi, who graduated from high school with a GPA of 93%, but did not win a Venezuelan scholarship, while those with lower averages were able to get them. He accused the Palestinian ambassador to Caracas, Linda Sobeh, of being responsible for the injustice suffered by students.

On July 23, Al-Monitor attended a solidarity march in Gaza, where dozens of students turned out to hold the PA responsible for the Venezuelan scholarships scandal. The students demanded an end to what they described as chaos. They also requested that an investigative committee be formed to hold accountable those responsible for the scholarship scandal and fix the relations with Venezuela.

At a time when Palestinians expect the PA to help them, the scholarship scandal is another indication that the government will not fulfill this duty. It will rather take advantage of the aid and financial grants offered to the Palestinians to fill its officials’ bank accounts at the expense of hundreds of thousands of underprivileged people in the Palestinian territories.