It is the latest example of cooperation between the two countries in the face of US opposition. 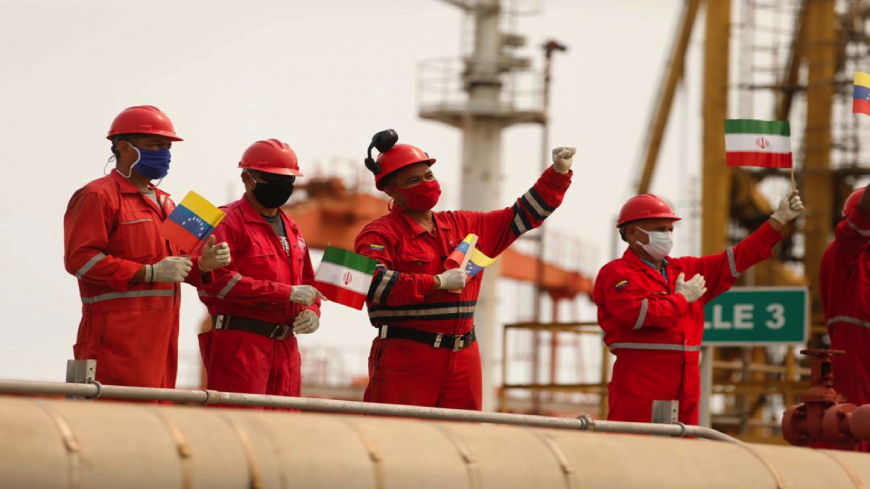 Workers of the state-oil company Pdvsa holding Iranian and Venezuelan flags greet during the arrival of the Iranian tanker ship Fortune at El Palito refinery in Puerto Cabello, Venezuela, May 25, 2020. - Miraflores Palace/Handout via REUTERS

Another Iranian ship has docked in Venezuela, this time carrying food. The delivery indicates the latest example of strong ties between the two countries sanctioned by the United States.

The Iran-flagged Golsan is currently docking on Venezuela's Caribbean coast, according to the ship-tracking website Marine Traffic. The ship carried supplies for the first Iranian supermarket in Venezuela, the Iranian Embassy in the capital city of Caracas said on Saturday.

“Another success in the friendly and fraternal relations between two countries,” the embassy said in a tweet.

A series of Iranian fuel tankers reached Venezuela last month, despite US pressure. Venezuela’s once-thriving oil industry has collapsed amid political and economic instability in the country and because of US sanctions.

The United States seeks to end cooperation between Iran and Venezuela. A State Department official told Al-Monitor last month that it was lobbying energy companies to refrain from doing business with Venezuela’s state-owned oil firm. The United States opposes Iran’s actions in Syria, Iraq, Lebanon and other countries across the Middle East. The United States also supports an opposition government in Venezuela.

Sanctions from the United States on both Iran and Venezuela have brought the two close together in recent years. A coronavirus aid flight from Iran also landed in Venezuela this month.

Economic ties between Iran and Venezuela are likely to continue, despite pressure from Washington. Both Iranian and Venezuelan state media reported that there will be regular fuel deliveries from Iran to the South American country following the food shipment.