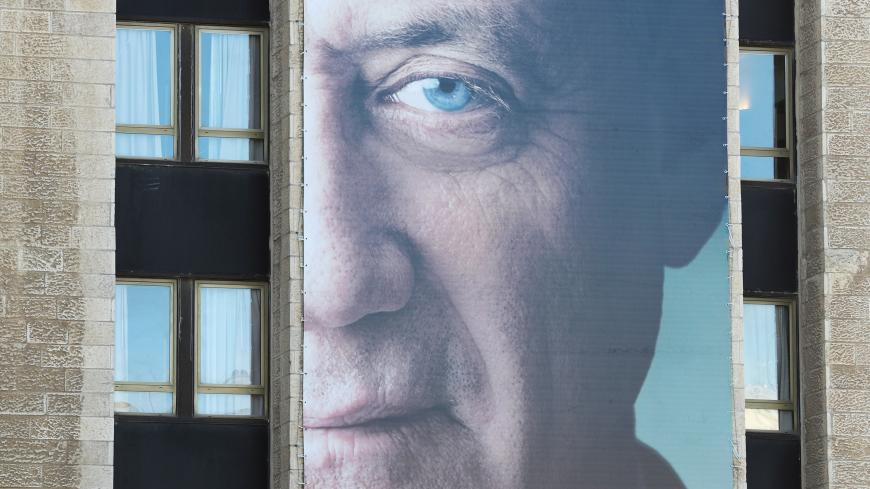 Part of a campaign poster of Benny Gantz, a former Israeli armed forces chief and the head of a new political party, Israel Resilience, is seen in Jerusalem, Jan. 29, 2019. - REUTERS/Ammar Awad

In the middle of December 2018, two senior members of the Shin Bet brought the following news to the office of former Lt. Gen. Chief of Staff (COS) and now head of the Blue and White party Benny Gantz: Hostile agents had hacked Gantz’ cellular phone and acquired sensitive information that could embarrass him. Gantz’ intentions of entering politics were only made known a short time before, in September 2018.

On Dec. 21, a short piece in the Ma’ariv newspaper announced a “cyber breach” in Gantz’ office but offered no further details. On Dec. 27, Gantz himself announced the establishment of the Israel Resilience party and his intention to run for the premiership. A few more days passed, and on Jan. 8 of this year, Shin Bet head Nadav Argaman announced in a Tel Aviv University convention that “a foreign power” would try to meddle in Israel’s elections via cyber technology. Argaman was clear and incisive. He said he had no idea which party would be favored by said foreign power. However, he added, “I know what I’m talking about.”

The media, including an Al-Monitor article, all thought that Argaman was referring to Russian involvement. Now it turns out that was not the case. Evidently, the Russians intervene in elections via the "accepted method" of creating fake news on social networks via phony accounts, robots and bots. But the power that initiated the cyberattack was Iran. This bombshell was hurled on March 14 into the Israeli campaign’s boiling epicenter in a television report of Channel 12 News: Iran had hacked Gantz’ mobile phone. According to the report, two high-level Shin Bet people warned him that the hacker was likely to use sensitive material against him. Boom.

The hullabaloo that erupted with the announcement continues to this very moment, despite the fact that it was clear from the beginning that Gantz’ mobile phone contained no sensitive security information. Gantz had ended his COS term of office four years earlier and was no longer connected to the security system or to intelligence. There was no concern that any such assets had leaked into Iranian hands. But what did appear on the mobile phone? Here is where we enter the private domain. Social networks were flooded with rumors regarding the contents of the hacked device. A furious Gantz told the senior members of his party — Yair Lapid and the two former chiefs of staff, Gabi Ashkenazi and Moshe Ya’alon — that no such intimate video clip existed, as certain agents had circulated to the public. Beyond that, he refused to address the issue and resolutely insisted that “no one can blackmail me.” In other words, he was saying that no foreign agents had access to sensitive information about him that could (theoretically) be used as blackmail. These announcements did not calm the flames; perhaps even the reverse is true.

Blue and White, Gantz’ party, tried to turn the affair into a boomerang tool against Prime Minister Benjamin Netanyahu. The party’s heads, especially Ya’alon, repeatedly argued that they don’t believe Iran is really behind a cyber breach. The party demands that Attorney General Avichai Mandelblit immediately begin an investigation into the affair, including tracking down the identities of those who leaked the information to the media. Those in the Prime Minister’s Office hurried to make it clear that the Shin Bet head did not update Netanyahu about Gantz’ breach in light of the political rivalry between the two men. According to Netanyahu’s people, this fact proves that Netanyahu was not the one who leaked the affair since he knew nothing about it.

Gantz and his people are trying to pin the whole affair on Netanyahu anyway by hinting that he used his various powers (as the prime minister is also head of the National Cyber Security Authority) in order to discredit the former COS and disseminate personal information about him. Of course, the Likud denies this completely. The Blue and White people started to direct their hints at the "special relationship" Netanyahu enjoys with Mossad Chief Yossi Cohen. According to their theory, the Mossad must be involved in this affair — thus, Cohen could have updated Netanyahu. As we know, the distance from Netanyahu’s close circle to the media is short. However, the Mossad vigorously denies this claim too. This leaves protagonists Gantz and Netanyahu facing off in a cyber mud bath and everyone else searching for the pictures drawn from the mobile phone.

Now it emerges that others beside Gantz have had their phones hacked. Ehud Barak, former prime minister and defense minister, went through a similar experience. Hacking attempts were directed at the mobile phones of high-level Cabinet ministers too. Most of the signs point to the probability that Iran conducted planned cyber attacks on senior Israeli politicians and public figures in the past as well in their effort to draw out as much security information as well as embarrassing personal information. The Shin Bet — and perhaps the Mossad too — uncovered these Iranian efforts, but only after the fact. It is not clear yet whether the Iranians really hold information ostensibly drawn from breached cell phones and the like. If so, what does this material contain? Only Benny Gantz and the Iranian intelligence minister know the truth.

The political ruckus that erupted following this affair has not yet died down. There are those in Blue and White who felt that Gantz should have certainly updated his cohorts in the new party early on before they joined the united party’s bandwagon. “This kind of event cannot remain secret,” one of the party’s higher-ups told Al-Monitor on condition of anonymity. The source added, “It would have been much better if Gantz would have told us all in advance and prepared us for a possible embarrassment.” Nonetheless, at this stage, the party’s leaders stand by Gantz and back him to the hilt.

Meanwhile, Netanyahu is trying to create reverse spin by saying that Iran supports Gantz and reminds everyone that “they [Gantz and Lapid] backed the Iran nuclear deal.” Three weeks before the April 9 elections in Israel, and it is already clear that this is Israel’s dirtiest election campaign ever. Gantz, who defeated an amateurish attempt two weeks ago to smear him with sexual harassment charges that ostensibly took place more than 40 years ago, now faces an additional, more difficult test. In the background is the absolute equilibrium in the surveys between the parties and the clear advantage that returned to the right-wing block despite the rockets fired over the weekend from Gaza to Tel Aviv.

Most of this political storm is still to be expected.