For Netanyahu, all is political, even cybersecurity

The hacking by a foreign power of the cellphone of the head of the Blue and White Party, Benny Gantz, is primarily a security lapse that occurred on the watch of Prime Minister Benjamin Netanyahu, who is in charge of the National Cyber Directorate. 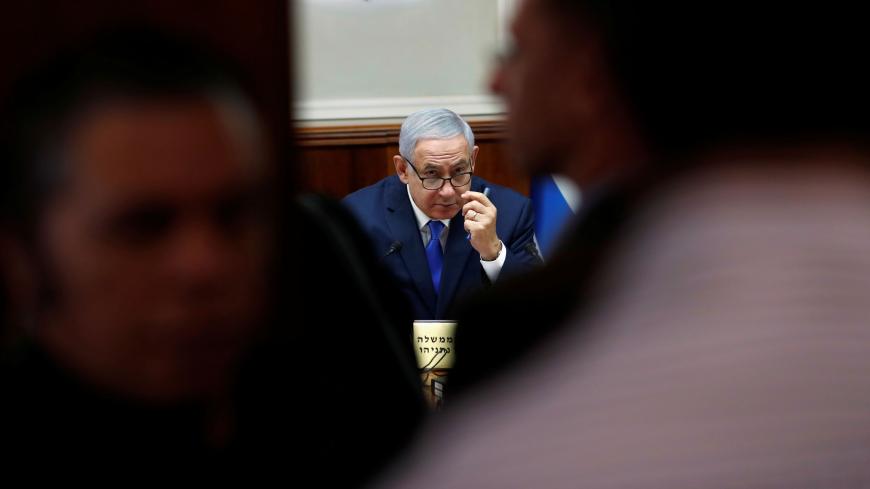 “It turns out that while I was ordering a break-in at Iran’s nuclear archives, Iran was breaking into Benny Gantz’s cellphone. It is ironic for two reasons: Gantz was chair of a cybersecurity company that went bankrupt. He was supposed to protect his phone. That is his personal failure. If Gantz can’t protect his phone, how will he protect the country?”

This monologue was delivered March 18 by Prime Minister Benjamin Netanyahu at an election rally of his Likud Party. He was referring to reports that surfaced March 14 saying Iran had hacked the phone of Israel's former military chief, Lt. Gen. (res.) Benny Gantz, who is the head of the Blue and White Party. Netanyahu appears to enjoy cynically bashing his main rival, harnessing what appears to be a national security lapse for his campaign.

Netanyahu is waging a war for survival ahead of the April 9 elections, and as his associates say, “He takes no prisoners” and “doesn't see anyone,” as the saying goes in Hebrew. These expressions in slang mean that he considers all means legitimate in order to achieve victory. However, this time he went a step too far in his no-holds-barred campaign (even compared with his own, limitless standards). If anyone should be providing answers in this affair, it is Netanyahu. Not because of the leak to Channel 12 News, where political analyst Amit Segal broke the story. Netanyahu and his associates were probably not Segal’s source. And even if he were involved, Netanyahu is too smart to leave any clues.

So why should Netanyahu provide answers? The prime minister is in fact the person officially in charge of the National Cyber Directorate, the body tasked with protecting Israel from attacks. Some six months ago, the cellphone and computer of former Prime Minister Ehud Barak were also hacked. Both Barak and Gantz headed the Israel Defense Forces in the past, but the Shin Bet security agency, which informed them of the breach, confirmed to both of them that nothing on their hacked appliances was a threat to state security.

Nonetheless, it is discomfiting to hear that Iranian intelligence, which is reportedly behind the hackings, is targeting senior Israeli defense officials and a former minister of defense (Barak). The mobile phones likely contained contacts and WhatsApp chats that could lead the Iranians to other information and direct them to others who may be worth hacking.

Gantz’s phone reportedly contained compromising information of a personal nature, a claim he vehemently denied. But beyond this titillating aspect of the story and the political scandal, this is a security and intelligence issue under the purview of the National Cyber Directorate to which Netanyahu holds the keys [the prime minister is the official head of the agency, and he is the one appointing its director].

It is worth recalling that Netanyahu was the one who identified the potential cyberthreat against Israel eight years ago. In May 2011, two years after his return to power, he announced with great fanfare the allocation of a special budget for a five-year plan that would position Israel at the forefront of global cybertechnology and protect the country from attack by hostile states. “We are gearing up in a very systematic way to deal with current threats and especially those of the future, which can be neutralized if we prepare in advance. Today’s threats are already emerging,” he said at the time.

It is hardly fitting for a prime minister in charge of national cybersecurity to be making political hay of a cyberattack against his leading rival during an election campaign. “The use of classified intelligence information for political ends is very grave. … I regard it as an attack on the democratic process,” former Mossad spy agency chief Tamir Pardo said March 18. “If Iran is really behind the hacking of Gantz’s telephone, it is completely clear why it was kept secret,” he added.

As details of this affair unfold, the warning issued at the beginning of January by Shin Bet chief Nadav Argaman that a foreign power was trying to meddle in Israel’s elections is becoming clearer. All signs point to the fact that he was referring to Iran, too (he did not mention country names at the time, so the Israeli media assumed he was referring to Russia). The Israeli media are now recalling the hacking of Hillary Clinton’s emails during her presidential election campaign in 2016, with suspicion pointing to Russian attempts to interfere in the US elections.

The leak about the Gantz phone hack set off a storm at the campaign headquarters of the Blue and White Party. Knowing that personal information about his life was in foreign hands and could be exposed at any moment also presented Gantz with a personal challenge. Although he faced the cameras and declared he was not vulnerable to blackmail, and made it clear in internal meetings that there were no embarrassing video clips on his phone, one does not have to be a body language expert to see the extent of his embarrassment and distress.

His party leaders accused Netanyahu of orchestrating the leak. So far, as mentioned, there is no evidence to support the accusation. The party also asked the attorney general to investigate who was behind the leak, hinting that a certain office in Jerusalem [Netanyahu’s] was to blame.

Nonetheless, the leak is not the main issue. There have always been and will always be leaks, especially during an election season. Segal, who came in for attack after his report as though he had acted in Netanyahu’s service, was forced to react. “Given the unusual circumstances and various outlandish conspiracy theories, I state here clearly what I have already hinted at. … The source of the story about Benny Gantz was not the prime minister, his close associates or anyone around him,” Segal tweeted.

Rather than looking for the source of the leak, Blue and White should be pointing its arrows at the ease with which the Iranians can hack the phones of former senior defense officials, and at the man who should have prevented the breach.

Netanyahu, for his part, should have resisted temptation and acted circumspectly. Although he probably did not leak the story, he and his associates, as well as senior Likud officials, made sure it did not die, embellishing it with ugly and hurtful innuendo about the information found on Gantz’s phone. They forgot that they, too, are vulnerable to such attacks.