The right-wing, radical Zehut party of former Knesset member Moshe Feiglin is gaining traction and might even enter the Knesset following the April elections. 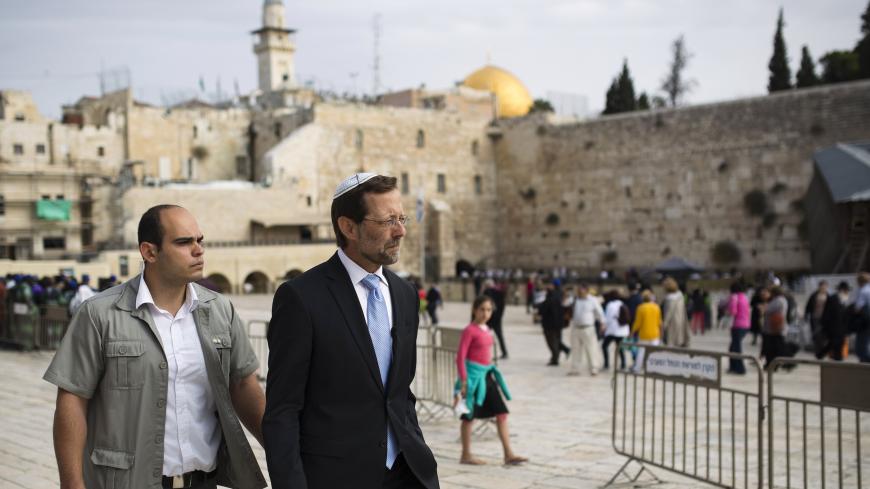 Whether the upcoming government will be formed by Prime Minister Benjamin Netanyahu or by Blue and White head Benny Gantz, one thing seems clear: The next Knesset will likely have a respectable representation of the Temple Mount Faithful movement, whose vision is to establish the Third Temple in Jerusalem.

According to recent polls, former Knesset member Moshe Feiglin’s Zehut party, which means identity in Hebrew, will pass the electoral threshold and may well constitute the surprise of the elections. Feiglin promises his voters that he will act on behalf of legalizing cannabis, causing many youths to join him. If the momentum continues, Feiglin and his messianic movement may be the party that tips the scales to determine who will assemble the next government. Therefore, Feiglin is now keeping his views regarding the rebuilding of the Temple and transfer of Arabs to himself. Instead, he raises the banner for cannabis legalization — at least until after the elections, of course.

But in his party’s election platform — probably unread by Feiglin’s cannabis voters — the political program is black and white. In the first stage, Feiglin proposes to abolish the Oslo Accords. After that, Israel could re-take control of the West Bank and extend its full sovereignty. The Feiglin plan offers non-Jewish residents of the West Bank either assistance in emigration (in other words, transfer); a status of permanent residency in the Jewish Halachic state (i.e., Israel governed by Jewish religious law); or citizenship. Citizenship will be granted only to those who wish to be loyal citizens and serve in the army. They will receive full citizenship after a "long and thorough examination track."

But the highlight of this agenda is the Temple Mount: Feiglin proposes dismissing the waqf (Muslim custodian) and transferring management to the Chief Rabbinate. The Israeli police would still have a permanent presence there. In addition, “a Jewish synagogue will be built on the Mount. Similarly, the Temple Mount will be opened to archaeological research without the limitations in place today.” Feiglin does not use the term “temple,” so as to avoid scaring off potential voters, but the “synagogue” mentioned above is only a euphemism for his real goal: a temple on the hilltop, with everything that entails.

Many in Israel, including the Arab sector, were amazed and horrified by Feiglin’s success in the polls. A source in the Hadash-Ta’al party alliance told Al-Monitor that the rise of Feiglin and his opinions on the Temple Mount are a direct consequence of the ongoing incitement against Arabs championed by Prime Minister Netanyahu.

Speaking on a Likud webcast on March 11, Netanyahu said, "The Arab citizens have 22 nation states around them and they do not need another." The Hadash-Ta’al source noted in reaction that "no wonder that racist opinions on transferring the Arabs and taking over the Al-Aqsa Mosque are getting support." The source added that "in the next Knesset [radical right activists] Bezalel Smotrich, Moshe Feiglin and Michael Ben-Ari will compete against each other on inciting against and excluding Israeli Arabs. Obviously, the Arab parties would have to operate as a blocking bloc against that."

The Arab street is also very worried. Dr. Raid Mahajna of Ar'ara told Al-Monitor that the poison infused into politics by Netanyahu and the right has infiltrated Israeli society. The public interested in legalizing cannabis is now ready to accept ideas such as the transfer and taking over of the Temple Mount. "You the Jews will ultimately be forced to pay for the shattering of Israel, my country as well, as it marches toward the abyss," he said.

In the next Knesset, Feiglin will not be alone. In a controversial political stunt orchestrated by Netanyahu, three right-wing parties united, including radical right-wing Rabbi Meir Kahane’s disciples from the Otzma Yehudit party. Netanyahu promised the Union of Right-Wing Parties two portfolios in his next government, and even a spot on the Judicial Selection Committee.

Another well-known member of the Temple Mount Faithful group is Michael Ben-Ari, No. 5 on the Union of Right-Wing Parties list and a representative of the Otzma Yehudit party. (The Central Election Committee rejected the petitions seeking to disqualify Ben-Ari’s candidacy.) Ben-Ari has a doctorate in Eretz Israel studies and in archaeology and is deeply involved in the status of the Temple Mount. He established the PR Temple Mount Heritage Foundation to spread knowledge about the Temple Mount and also founded the Mikdash (Temple) Educational Center, with similar goals. On Jerusalem Day in 2018, he encouraged Jews to make the pilgrimage to the Temple Mount, saying, "This year on Jerusalem Day … tens of thousands of us will come and say, ‘The Temple Mount is in our hands.’ But not with words, with actions. We will immerse ourselves [ritual purification], then rise up and visit the Temple Mount in a holy state. … Everyone must make an effort, each and every person must turn this proclamation into a reality."

The two extremist parties, Zehut and Otzma Yehudit, will certainly work together once their representatives serve as Knesset members. They will want to realize their great plan of taking control of the Temple Mount to establish the Third Temple.

Israel has recently produced an impressive documentary series, “The Fall and Rise of the Jewish Underground,” directed by Shai Gal. The series followed the members of the Jewish underground who tried in the early 1980s to assassinate Palestinian mayors. They also murdered three students in the West Bank’s Islamic University with gunfire and grenades, and planned to blow up Al-Aqsa Mosque, believing this would bring redemption. In this series, former Shin Bet head Carmi Gillon states that if the plan had not been thwarted, a nuclear war would have erupted in the Middle East.

All the underground members who were imprisoned, including those given life sentences, were released within a few years. Some of them enjoy key roles in Israel’s establishment today and are permanent, influential visitors of the Israeli Knesset. Some examples: Ze’ev Hever (“Zambish”), a head of the Yesha Council (the umbrella organization of the settlement movement); and Natan Natanzon, a head of the Benjamin Religious Council and member of the negotiations team of the HaBayit HaYehudi party.

Yehuda Etzion and Natan Natanzon, the series’ key interviewees, do not hide that they aspire — even today — to establish the Third Temple on the Temple Mount. Soon they will receive reinforcement from Otzma Yehudit and Moshe Feiglin.

We can safely assume that the Zehut supporters, and evidently the more moderate supporters of HaBayit HaYehudi (which is currently part of the Union of Right-Wing Parties), will argue that blowing up Al-Aqsa Mosque is absolutely not on the table anymore and that the building of the Third Temple and expulsion of Arabs from Jerusalem and the territories is only a dream. But let’s remember that no one in the 2015 elections spoke seriously about the annexation of the territories and the establishment of a binational state. For Kahane’s successors, territorial annexation of the territories is now on the table. There is wall-to-wall agreement for implementing this annexation on the parts of all the right-wing parties and large swaths of the Likud as well. Who knows, perhaps the next stage is the Temple Mount!

Even if they do not succeed in transforming this hallucinatory idea into reality, the very fact that people talk about the establishment of a Third Temple (on the ruins of Al-Aqsa Mosque or next to it) constitutes a religious declaration of war.

In the series on the Jewish underground, Gillon sadly called the protagonists “crazy” and “messianic” and was angry that they had been turned into cultural heroes with the power to influence the decision-making process. This series was filmed before he could know that eventually, they would even become part of Israel’s legislative body. One does not need a developed imagination to realize how Israel will appear in the eyes of the “sane citizen” and the eyes of the entire world in another few months.