Why Israelis ignore 40th anniversary of peace with Egypt

Forty years after Israeli Prime Minister Menachem Begin and Egyptian President Anwar Sadat signed the peace treaty, Israelis sideline this achievement and prefer to ignore that relations with an Arab nation can change. 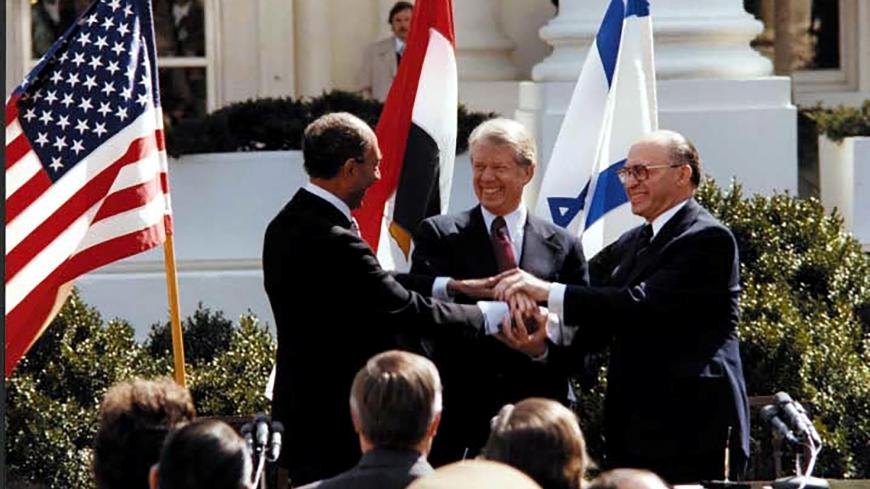 US President Jimmy Carter, Egyptian President Anwar Sadat and Israeli Prime Minister Menachem Begin join hands in celebration of the signing of the Treaty of Peace Between the Arab Republic of Egypt and the State of Israel at the White House in Washington, DC, March 26, 1979. - Jimmy Carter Library/National Archives/Handout via REUTERS/File Photo

Eighteen months prior to the signing, in November 1977, Sadat landed at Ben Gurion Airport, becoming the first Arab leader ever to pay an official visit to Israel. Barely four years after the trauma of the 1973 Arab-Israeli war, Israel Television broadcast history in the making. The black and white footage showed Sadat visiting the Yad Vashem Holocaust memorial in Jerusalem, addressing the Knesset in Arabic, embracing Begin and discussing with him a “peace of the brave.”

Begin, whose 1977 election was thought to be the precursor of yet another war with the Arabs, thundered from the Knesset podium, “War is avoidable; it is peace that is inevitable.”

A lot of water has passed since under the bridges of the Nile, Jordan and Tel Aviv Yarkon rivers. Sadat was assassinated in 1981, Begin became bogged down in the 1982 Lebanon War that was his eventual undoing, but the Israeli-Egyptian peace has been kept — cold, but alive. This week, on its 40th anniversary of the accord, senior Egyptian intelligence officials were busy trying to avert another war between Israel and Hamas. In fact, the Egyptians have played over the years a key role in calming the Middle East. Egypt and Israel have been conducting unique, close coordination in recent years against jihadi organizations in the Sinai Peninsula, as well as exchanging intelligence in the regional struggle against their common enemy: Iran. The heads of Egyptian intelligence are frequent guests in Israel to discuss security matters, as are the heads of Israel’s Shin Bet and Mossad agencies in the Land of the Nile.

Opponents of the Israel-Egypt peace treaty carried out two terror attacks against Israelis over these decades of cold peace — one in the Sinai sand dunes of Ras Burqa in 1985, and the other on Road 12 leading to the southern Red Sea port of Eilat in 2011. Nonetheless, the agreement between the two states — bitter enemies in the past — is extant, as it was even during the regime of the Muslim Brotherhood in 2012-2013. Today’s peace is still cold, but it is neither sad nor painful, nor a source of bereavement or bloodshed. It is simply peace.

Forty years of peace, but Israel of 2019 is ruled by an increasingly radical right-wing regime, whose leaders compete with each other to see who is loudest in sanctifying the land and most violent in violating the sanctity of human life. No one in Israeli officialdom thought to mark the landmark event that changed Israel’s position in the Middle East and the world, nor even to extol the courageous actions of the Likud Party founder and leader, Begin.

Only one small, persecuted movement (as are all Israeli human rights groups opposed to the occupation), Peace Now, sought to remind Israelis of the benefits of peace. Founded in 1978, about a year after Sadat’s Jerusalem visit, it mobilized “soldiers of peace” and provided Begin with support and encouragement in the face of the many forces hostile to the agreement at the time. In its heyday, before peace became a dirty word, Peace Now numbered thousands of activists and tens of thousands, if not hundreds of thousands, of followers. Over time, its strength waned under the force of right-wing delegitimization. Organizations such as Peace Now, B’Tselem, Yesh Din, Breaking the Silence and others have been blacklisted as “Israel bashers” and their supporters condemned. The peace for which they struggle does not have many takers these days. That is perhaps why Israel under Prime Minister Benjamin Netanyahu did not bother to mark the anniversary of the historic peace, lest someone conclude that peace with the Palestinians might also have some benefits. Anyway, does anyone in the Likud even remember Begin, who has been adopted in the current election campaign by former Likud stalwart Finance Minister Moshe Kahlon, founder of the center-right Kulanu Party?

In his most recent role — in the highly acclaimed 2017 movie “Foxtrot” by Samuel Maoz — Israeli actor Lior Ashkenazi played a father whose son Yonatan was killed in action and whose family was crushed by the loss. Now, in a low-key clip produced this month by Peace Now titled “Why am I still alive?”, Ashkenazi explains that peace is forged with the brave, as it was by the two leaders who were enemies until they decided to swim against the tide without fear. In the video clip, Ashkenazi talks not only about the fruit of peace, but also recalls the voices at the end of the 1970s who shouted, protested and had no qualms dubbing the mythological leader of the Etzel underground and the Likud, Begin, “a traitor” for agreeing to vacate the Sinai Peninsula in return for an end to bloodshed. “Why did I not die in a war?” Ashkenazi asks, answering, “Begin proves that truly great leaders know how to make courageous decisions. … I was not killed in a war with Egypt because there were brave people here who made peace for me.”

Right-wing leaders who formed the movement to stop the withdrawal from the Sinai at the time are key activists these days as well, in the service of the right-wing settlement movement in the West Bank. Many of them hold key positions, and they are the ones who set the tone against peace with the Palestinians.

At the end of the 1970s, peace opponents argued that the Arabs could not be trusted and that a pullout from the Sinai would be disastrous and bloody. These days, they warn against the peace process with the Palestinians, using the same arguments. Then, they mercilessly attacked Begin as he cried, “There is pain in peace, yes. There are sacrifices for peace, yes. All are preferable to the casualties of war.” Begin stood firmly, taking the path of peace. Netanyahu, on the other hand, caves in to the settlers and their leaders. Sometimes it seems as if they are the ones deciding, with Netanyahu following along, attempting to please them. Only recently did Education Minister Naftali Bennett brag that in 2013 he forced Netanyahu to break up negotiations with the Palestinians. Since then, he and his friends have been cultivating the idea of annexing Palestinian territories. This is an idea, and an aspiration, that they will surely advance more if Netanyahu indeed gets elected to form the next government.

In an interview with Al-Monitor, Ashkenazi said that as a boy, he heard people say, “When the door to Sadat’s plane opens, a firing squad will come out and murder all of Israel’s leaders. The clip tries to restore the word ‘peace’ into the Israeli discourse, not as belonging only to the left. There is another way, one with hope.”

The idea that there is no one on the Palestinian side with whom to make peace has been embedded deeply into the Israeli narrative. “There used to be songs about peace. Even (iconic songwriter and singer) Naomi Shemer, who made no secret of her right-wing views, aspired to peace. Today, one is not allowed to say the word aloud.” Ashkenazi is surprised that almost no one remembers that one of the most important events in Israeli history occurred this week, 40 years ago, and that it barely merited an item on the news. “I don’t know to what extent the clip and the campaign will have an impact, but I can say that many people saw it and were greatly moved. It shows that there was once peace that is no more. I hope I have managed to make people think — not another war, not another operation or force that must be used.”

Some 5,100 viewers have seen the clip “Why am I still alive?” on YouTube, and over 10,000 on Twitter and other platforms. The rest of the Israelis keep hearing the word “strong” in its various permutations that echoes throughout the election campaign. Not a mention of the word “courage,” nor of the word “hope.”