Israeli Prime Minister Benjamin Netanyahu talks big about improving ties with Arab countries but his speeches are meaningless without first resolving the conflict with the Palestinians. 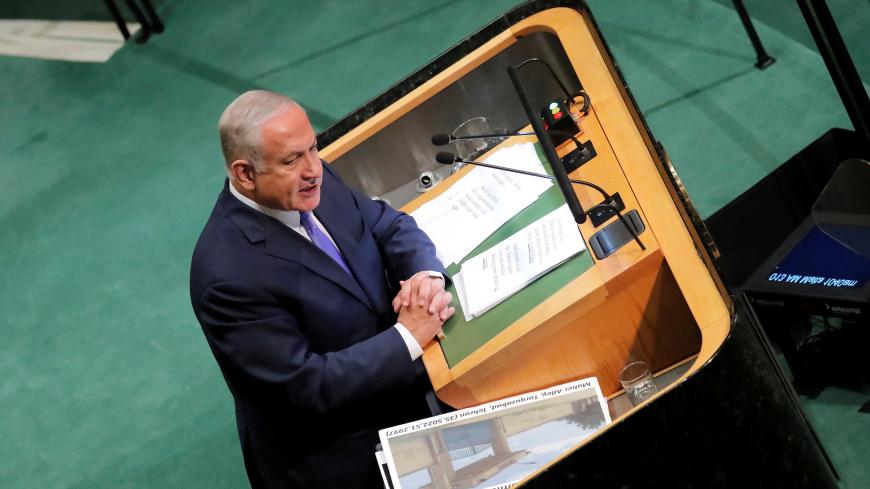 Like all his recent speeches to the annual UN General Assembly, Prime Minister Benjamin Netanyahu’s Sept. 27 address to the international forum successfully concealed the Palestinian issue behind the Iranian bomb.

Netanyahu has made it a habit to lash out in such speeches at Western Europeans for allying with Tehran and at the same time embrace the Arab states that fellow victims of the Iranian menace. Netanyahu told the UNGA that the 2015 nuclear agreement with Iran had brought Israel and many Arab states “closer than ever, in an intimacy and friendship that I’ve not seen in my lifetime and would have been unimaginable a few years ago.”

Netanyahu also expressed his hope that “the day will soon arrive when Israel will be able to expand peace, a formal peace, beyond Egypt and Jordan to other Arab neighbors, including the Palestinians.”

The key challenge is not to come up with solutions satisfactory to both sides, while getting them to give these ideas serious consideration. On Sept. 26, US President Donald Trump appeared to adopt the two-state solution when he stood side-by-side with Netanyahu in New York. However, his decision to relocate the US Embassy to Jerusalem this past May and his more recent decision to cut aid to the Palestinians and close the PLO offices in Washington have shattered Palestinian faith in the United States as an honest broker.

In his UNGA speech this week, Palestinian President Mahmoud Abbas reiterated his commitment to a two-state solution of the conflict with Israel based on the 1967 borders. However, the meager diplomatic yield of the 1993 Oslo Accord has completely eroded Palestinian trust in its leadership, which 25 years ago promised that the agreement with Israel would end its occupation of their lands.

Netanyahu said he might consider the idea of a Palestinian state alongside Israel without an army and that he looked forward to working with Trump and his team on achieving peace. Netanyahu’s record on the peace project, however, is hardly stellar.

Opposition chair Tzipi Livni, who represented the Netanyahu government and that of his predecessor Ehud Olmert in negotiations with the Palestinians, told Al-Monitor several months ago that the main obstacle to an agreement lies in Israel’s political unwillingness to implement the two-state solution. Livni believes that only broad public support among Israelis can create the political willingness needed to pay the territorial cost of peace. If Trump presents the two sides with a reasonable blueprint for dividing the land between Israelis and Palestinians based on the 1967 borders, the political right will have a hard time accusing him of turning against Israel and joining the enemy camp, as it did to President Barack Obama.

The blows that Trump has dealt the Palestinians are making it hard for him to promote the “ultimate plan” he promised for Israeli-Palestinian peace. When the two sides are not speaking and one of them does not talk to the United States, either, one must look elsewhere for an icebreaker; another mediator that could break through the barriers of fear and hatred. Options can be found nearby — in the Arab states with which Netanyahu reported having a close and intimate relationship.

In March, the Saudis started allowing flights between Israel and the Far East (Air India flights from Tel Aviv to New Delhi) to cross their air space, a significant indication of a rapprochement between the two. Now Netanyahu will have to warmly welcome Saudi King Salman bin Abdulaziz Al Saud along with Abbas if the two of them ever decide to arrive together for a historical visit to the Knesset. In 1977, Egyptian President Anwar Sadat changed the course of history by taking such a step. William Quandt, an adviser to former President Jimmy Carter, recounted last year that at the time, the US president had already toyed with the idea of a Jerusalem summit with the participation of Arab leaders and the UN Security Council.

One cannot exaggerate the impact 41 years ago of the surprise visit to Israel by the leader of the largest state in the Arab world on the climate in Israel and on the political willingness to pay the price of peace. Sadat’s electrifying Knesset appearance did for public support of peace what thousands of hours of negotiations orchestrated by successive US administrations could not before then and have not done since.

A direct appeal by an Arab leader to the Israeli people from the Knesset podium is worth more than dozens of international conferences, UN speeches and press conferences.

A journey to Jerusalem by the Saudi king and Palestinian president toward the end of 2018 will be far easier than Sadat's visit from Cairo at the end of 1977. For the Muslim rejectionist states, Sadat’s Jerusalem visit made him a traitor to the Arab cause and collaborator with the Zionist enemy. On the other hand, the Arab leaders’ road to Jerusalem these days is paved with the support of the Arab League and the Organization of Islamic Cooperation, both of which are committed to the March 2002 Arab Peace Initiative. The conflict with the Palestinians is now the only remaining obstacle to implementation of that initiative, which calls for the Arab and Muslim world to recognize Israel and normalize relations with it, a goal Netanyahu has professed to desire.

Addressing the Israeli Knesset in November 1977, Sadat said that even if peace were achieved between Israel and each and every Arab state, it would not be sustainable unless a just solution were found to the Palestinian problem. Addressing the UNGA last week, Netanyahu said, “When you form friendships around a threat, around a challenge, you quickly see opportunities, not only for security but … a better life for our people.”

The Israeli-Arab friendships forged around the Iranian threat and the challenge of its elimination has created another opportunity: a chance deal with the threat of terrorism and zealotry and achieve a just and logical resolution of the Palestinian problem that will preserve both the democratic nature and Jewish identity of the State of Israel.