Gaza and Blue and White put Netanyahu on the defensive

As Israel’s most experienced campaigner, Prime Minister Benjamin Netanyahu was quick to realize that the days leading up to the election could be lethal to his image as Mr. Security. 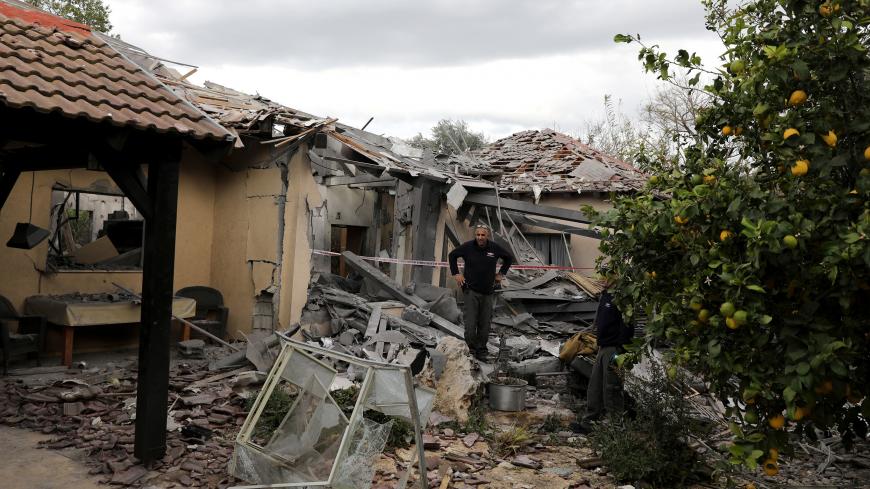 A short video of Prime Minister Benjamin Netanyahu speaking on a runway March 25 as he prepared to return to Israel from Washington highlights the concern he felt about losing control of his election campaign. Journalists tailed Netanyahu as he walked with his wife Sara toward the stairs to his plane, eager to get an update or a comment on Israel’s military strike in Gaza. The problem for Netanyahu was that earlier that day, a rocket fired from Gaza had hit a home in Mishmeret, a village in the center of Israel, striking fear among every Israeli.

Netanyahu was frustrated that he had to cut his festive visit to Washington short. He raged at the journalists that from his perspective, they had not given sufficient coverage to President Donald Trump’s announcement recognizing Israeli sovereignty over the Golan Heights. “People will settle the score with you for not giving it more than a minute of coverage,” Netanyahu warned. “But historically, this was huge.” It was only after the reporters pleaded with him that he agreed to make some general comments about Gaza.

Up to that point, Netanyahu’s election campaign had met all its objectives despite the various criminal investigations into his dealings. He had prepared for the election for about a year. Netanyahu was convinced that the investigations would end with his indictment, so he primed his supporters accordingly, claiming that the various law enforcement agencies were conspiring to build a case against him. He even went so far as to try to delegitimize the country's police commissioner and the attorney general, both of whom he had appointed. The strategy worked.

After Attorney General Avichai Mandelblit announced on Feb. 28 that he was considering indicting the prime minister for bribery, fraud and violation of trust, Netanyahu barely took a hit in the polls. He believed that his campaign was in control of the situation, while the rival Blue and White party was declining in popularity due to problems with its campaign strategy. At that exact moment, however, anything that could go wrong for Netanyahu actually did.

The number two member of Blue and White, Yair Lapid, took control of his party’s campaign around mid-March and for the first time managed to attach a label of corruption that stuck to Netanyahu because of the German submarine deal (though it should be noted that Netanyahu has not been investigated or indicated in that case). An orchestrated campaign insinuating that Netanyahu had sold out the country’s security succeeded in doing what Mandelblit's threat of an indictment did not.

The verbal campaign by Blue and White's leaders linked the enormous personal profit that Netanyahu earned from holding shares in a steel company, which had an indirect connection to the submarine provider, to the submarine investigation, Case 3000. The combination of greed and harming state security did exactly what it was intended to do — force Netanyahu to switch from offense to defense. For a while, things looked so bad that voters began abandoning the Likud. A few days ago, official polls showed the Blue and White gathering momentum, and the Likud getting weaker. Netanyahu's own polls also pointed to a problem.

After four years of boycotting Israeli media outlets deemed insufficiently right wing, Netanyahu decided to sit for an interview with Channel 12 News. In doing so, Netanyahu sought to stop the ominous trend in the polls and prevent his party from growing even weaker. His spokespeople informed Channel 12's news editors of Netanyahu's desire to be interviewed only half an hour before the prime minister surprised everyone by showing up at the studio.

The March 23 interview made for fascinating television. The interviewers showed no mercy, pummeling Netanyahu with penetrating questions. There were no softballs. They refused to let him off easy. Netanyahu actually seemed tense. He was not at his best when questioned by the journalist Keren Marciano. Nevertheless, the episode ended with Netanyahu shoring up his base and halting the Likud's downward slide.

In the interview, Netanyahu showed his supporters that he would fight to defend his reputation. He even announced that he would file a libel suit against the Blue and White leadership for what he called their “blood libel” against him regarding the submarine scandal. Netanyahu is yet to follow through, but his bluster has succeeded.

Then came the morning of March 25. Just a few hours before Netanyahu was scheduled to meet with his buddy Trump, a single rocket from Gaza ruined his election celebration in Washington. From that moment on, American recognition of Israeli sovereignty over the Golan Heights was relegated to the inside of the newspapers. All television news covered was the escalation from Gaza, and Netanyahu, who is also defense minister, spent many long hours in Washington on the phone to Israel. He had to decline Trump's festive state dinner and forego his speech to AIPAC. Forced instead to return to Israel, he was fuming and bitter.

Just two weeks before the April 9 election, Gaza is, once again, stuck like a bone in Netanyahu’s craw. “Mr. Security” had done everything he could in the last year to contain an escalation in the south and avoid a large-scale military campaign. Now he finds himself under siege from the right, led by the chairman of the New Right, Naftali Bennett, and the chairman of Yisrael Beitenu, Avigdor Liberman. Both are attacking him mercilessly for adhering to what they consider to be lax policy toward Hamas and Gaza. Fine, they also want to get elected, and their poll numbers are hardly promising, and some of their supporters are in the Likud camp. Netanyahu is worried that another entanglement in Gaza could reshuffle the deck but not in his favor.

Since Netanyahu is also defense minister, there is no one to share the criticism being aimed at him. As Israel’s most experienced campaigner, he was the first to realize that whatever has happened in the election campaign until now is no longer relevant. It’s a whole new ball game, and his reaction to events in Gaza will undoubtedly determine the electoral outcome.

The days leading up to April 9 could be lethal to Netanyahu’s image as Mr. Security, particularly now that he is facing off against a powerful party, Blue and White, led by generals. “It all looks too good to be true,” a Likud minister requesting confidentiality told Al-Monitor 10 days ago in response to Netanyahu’s high standing in the polls. Even he never imagined that so much could start to go wrong.