In an interview with Al-Monitor a week before the election, Blue and White Chairman Benny Gantz admits he is disturbed by shifting trends in the polls and rejects any chance of partnering with Prime Minister Benjamin Netanyahu. 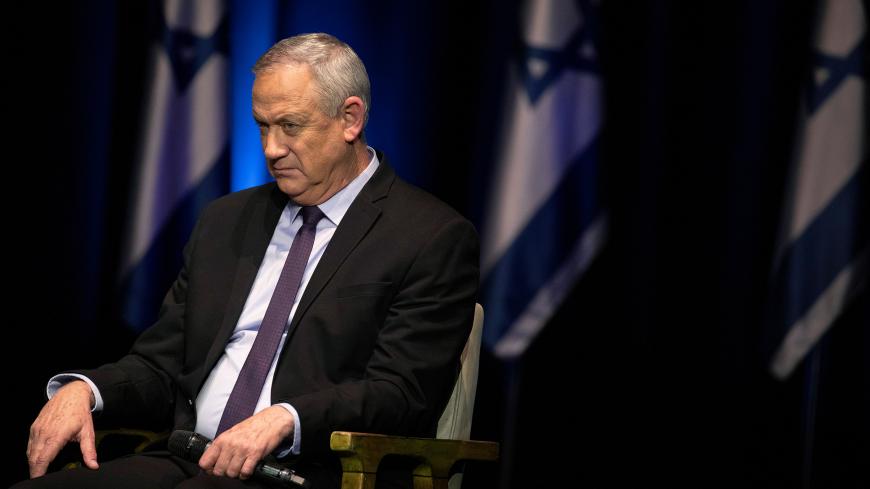 Benny Gantz, leader of the Blue and White Party, takes part in a rally ahead of the election, Tel Aviv, Israel, Feb. 17, 2020. - REUTERS/Amir Cohen

Blue and White Party leader Benny Gantz spent the morning of Feb. 24 skipping from one interview to the next, part of a media blitz in the last week of his 2020 election campaign. Most of the interviews took place in his election headquarters in Tel Aviv, in a well-equipped studio mockup of the prime minister’s office. The warmly lit set was decorated with an Israeli flag, shelves of neatly arranged books and a desk covered with family photos.

But now, less than a week away from the March 2 election, Gantz’ path to prime minister seems particularly unlikely. Throughout the election campaign, the Blue and White party has kept a steady lead over the Likud and maintained its position as the biggest party. But polls released early this week by the two major television networks seemed to show a very different trend. The Likud was now ahead, with Blue and White losing anywhere from two to four seats.

The brakes began to squeal Feb. 20, when it was reported that the police will investigate the Fifth Dimension, a company Gantz headed that allegedly won a tender by improper means. Even though Attorney General Avichai Mandelblit stressed that Gantz was not implicated in this affair, the Likud has managed to attach the scent of scandal and corruption to the Blue and White Party and its leader. Having centered its own campaign on Netanyahu’s corruption scandals, Blue and White suddenly found itself on the defensive. At the same time, Netanyahu projected the message that the Blue and White party was planning to form a coalition with the Joint List, even though Gantz repeatedly denied it. The Jewish Israeli mainstream, including the political center, would have a hard time accepting such a partnership.

Blue and White found itself losing voters, not only to the right but also to the leftist Labor-Gesher-Meretz list as some voters were put off by the way Gantz and the other Blue and White seniors dismissed any cooperation with the Joint List. Turning such a trend around one week before the election is daunting task indeed, even if there is some consolation in the fact that Netanyahu does not yet have 61 seats. Since Gantz doesn’t have 61 seats either, the possibility of a fourth round of elections is not out of the question.

Gantz does not deny the danger. “I am very disturbed by this shifting trend. This is the first time that we are not ahead,” he said in an interview with Al-Monitor. "We kept our cool when polls predicted a two- or three-seat difference [in our favor], and now as well we are not getting anxious about the difference we currently see, as disturbing as it is. Every voter in the State of Israel who wants to see change has a personal responsibility to do the minimum required of them by getting out to vote. Otherwise, we risk having a fourth round of elections. I can see Netanyahu leading us there. I will not sit with Netanyahu [in the same government].”

What seemed far-fetched a few weeks ago has become a realistic possibility in a matter of days. There may yet be a fourth round of elections after all, with all of the parties taking harder lines on their positions and the option of a unity government off the table, at least for Gantz.

After the second round of elections in September, Gantz came very close to reaching an agreement with Netanyahu to form a unity government. In the end, however, it was blocked by the Blue and White's number two, Yair Lapid. Now Gantz seems no less determined than Lapid to reject partnering with Netanyahu in any way. In the not so distant past, when Gantz spoke about Netanyahu, his criticism came off as a campaign tactic. Now, however, he sounds like he strongly believes all the harsh things he has to say about Netanyahu’s character and behavior. As a result, it seems a unity government is not on the horizon.

“The more I see of his lies and dirty tactics, the less chance there is of me sitting with him in the same government,” said Gantz. “If I were the person [in the party] most likely to agree to sit with him just a few months ago, today I feel very removed from that. I think that Netanyahu crossed several red lines that should never have been crossed. He has been indicted. There is a date for his trial.”

Gantz is convinced that it will be easy for him to fill Netanyahu’s shoes and take US President Donald Trump’s peace process to the next level. “I have a good relationship with the White House. My meeting with President Trump was excellent,” he explained. Gantz added that he has the impression that the White House isn’t worried about a possible change of government in Israel. “They will get the same friendly government that cooperates with the US strategically, and we will continue with the 'deal of the century.'”

Meanwhile, a Channel 13 poll released on the evening of Feb. 24 showed a further decline in support for the Blue and White Party, while the Likud regained its position as the largest party. Though the poll does not show either of the two blocs winning the election, it's hardly good news for Blue and White.

In an effort to stop the bleeding, Blue and White is clutching at a security agenda centered on the current escalation in Gaza. On Monday evening, the party canceled a big rally to mark the anniversary of the party’s founding. Instead of celebrating, Gantz went with Gabi Ashkenazi and Moshe Ya’alon, the two other former chiefs of staff in the Blue and White leadership, on a visit to the communities surrounding the Gaza Strip. Rockets were still being fired from Gaza when Gantz stood before the cameras and promised that Ashkenazi would be minister of defense in his government: “Netanyahu, you failed! You appointed ministers of defense as part of your political wheeling and dealing. You appointed a puppet cabinet … and it’s all because you’re so focused on your trial.”

The cease-fire entered into effect at midnight, and it is doubtful that the brief round of fighting and Gantz’ promise to appoint Ashkenazi minister of defense will turn the polls around. Gantz and the Blue and White Party will have to fight to control the hemorrhage for the rest of the week.