Has Islamic State returned to Iraq?

Despite Iraq’s declaration of victory against the Islamic State in 2017, IS sleeper cells have recently become active across the country. 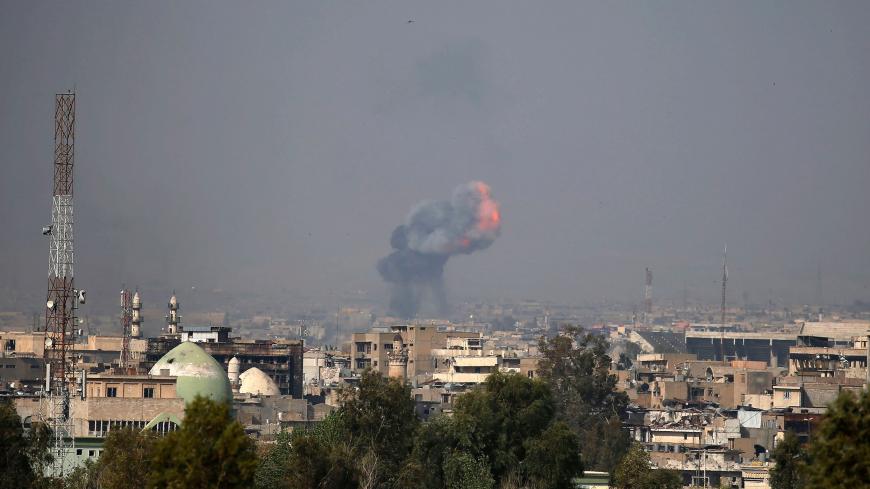 Iraqi security forces killed five suicide attackers northwest of the northern Iraqi city of Mosul Feb. 20. A car bomb in central Mosul killed one civilian and wounded 13 others Feb. 28, just the latest in many recent incidents that have also hit the southern and western parts of the country.

A group of Islamic State fighters entered Haditha province in Anbar governorate on the evening of Feb. 23 and crossed Lake Tharthar in private boats. In Najaf governorate, they came upon six fishermen sleeping in a tent and opened fire, killing them all.

On the same day, an IS group armed with explosive belts and machine guns attacked the village of Anamel in al-Shirqat, Saladin governorate. The residents along with the Federal Police and the Popular Mobilization Units (PMU) fought back.

Since the second half of last January up until the last 10 days of February, IS has carried out several operations in the west of Iraq and Saladin governorate. All the operations were in the desert and directed against civilians. Some of the civilians were attacked as they harvested desert truffles.

Several IS operations have struck former IS territory in Anbar governorate and the surrounding desert close to the Syrian border, where the Iraqi security forces and the international coalition’s air force are still organizing strikes against IS targets. According to intelligence reports, 1,000 IS fighters have entered Iraq over the past six months.

News and concerns of a possible return of IS to Iraq are circulating as reports of the violence spread. Falih Faisal Fahad Alfayyadh, chairman of the PMU and adviser to the National Security Council, stated in a Feb. 16 interview with the German weekly Der Spiegel, “An underground movement is forming, and it is a threat to the entire world.”

Alfayyadh warned that while a new IS movement is a grave danger, IS and similar organizations have lost popular support.

Prime Minister of the Kurdistan Regional Government Nechirvan Barzani said Jan. 27, “We have concerns about the return of IS to Anbar and Nineveh.”

At the start of February, the Pentagon warned of the return of IS to Iraq. US spokesman for the anti-IS coalition in Iraq Col. Sean Ryan stated in a Feb. 20 press conference in Baghdad that there have been signs that IS may be returning to Iraq. He warned that the existing militant presense poses serious risks that must be dealt with.

Yet the Iraqi security forces downplay the risk of the recent IS movements, calling them ploys for publicity. The spokesman for Iraq's Joint Operations Command, Brig. Gen. Yahya Rasool, told Al-Monitor, “We are carrying out preventive operations against IS, which is trying to make appearances just to show it is still in Iraq.”

Retired Gen. Abdel Karim Khalaf told Al-Monitor, “The organization has no grounds to come back, and what it is doing is just rumors and psychological warfare. In reality, there is nothing. Even the leaders of the organization are not as united as before.” He added, “The organization cannot go back to its status prior to liberation efforts in 2016. They have no infrastructure, no funding and no regional support to help them. The return of IS is almost impossible. IS might carry out assassination operations and bombings, but not like before.”

The Syrian Democratic Forces' handover of IS fighters to Iraqi security sparked concerns about foreign IS militants returning to Iraq. A government press release reassured the public Feb. 15 that the detainees are all Iraqi citizens.

According to statistics compiled by Michael Knights of the Washington Institute, IS has carried out 1,271 attacks between January and October 2018. Of this number, there were 762 bombings, 135 group attacks and 270 roadside bombs. The organization tried to cross 120 checkpoints or military centers of the Iraqi security forces and carried out 148 targeted assassinations. Fadel Abou Raghif, who is closely tied to Iraqi intelligence, told Al-Monitor, “IS is trying to market itself again through regrouping” to appear stronger.

He added, “They want to come back with a new image. … They want to go back to car bombs and assassination operations. The most dangerous locations are Wadi al-Qizh and Hawran Valley in Anbar, Metebeja in Saladin, Badush west of Nineveh, the Qadai desert of Raoua and Qaim in Anbar."

It is safe to say that concerns over IS' return are not baseless, but the group is not capable of returning to its past activity levels. IS cannot achieve the mobilization and popular support it once did nor attract the media attention it used to. But however dispersed and economically weak, the militants could still disrupt the work of the Iraqi security forces.