Sistani to Rouhani: Iraq's sovereignty must be respected 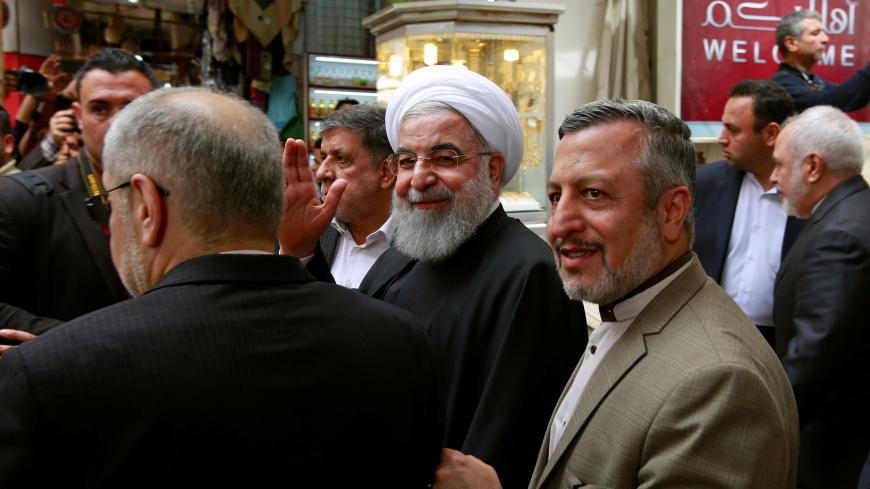 During the meeting, Sistani highlighted the importance of respecting Iraqi sovereignty. “Iraq faces three important challenges: fighting corruption, improving services and keeping weapons in the hands of the state,” Sistani told Rouhani, according to a statement issued by Sistani's office.

Sistani welcomed “any steps to strengthen Iraq’s relations with its neighbors,” but affirmed that they should be “based on respect for the sovereignty of the countries with no interference in domestic affairs.”

Sistani also stressed “the necessity of adopting moderate regional and international policies in this sensitive region to avoid disasters for its nations,” referring to the escalating hostility between Iran and Saudi Arabia that shakes the region at times.

This is the first time that Sistani has met with an Iranian president. He is known for having a good relationship with Iranian Reformists, and met with prominent Reformist leader Hashemi Rafsanjani in 2009. He also met several times with the current Iranian foreign minister, Mohammad Javad Zarif.

However, Sistani has kept a clear distance from Iran's hard-liners. He refused to meet with former Iranian President Mahmoud Ahmadinejad during his trips to Iraq in 2008 and 2013. In addition, he refused to meet with Mahmoud Hashemi Shahroudi, former chairman of the Iranian Expediency Council, who was sent to Najaf as a special envoy of Supreme Leader Ayatollah Ali Khamenei.

Sistani has long been rejecting Iranian interference in Iraq, stressing the importance of a civil state in Iraq based on a transparent democratic process. He also rejected on several occasions any foreign interference in the Middle East, whether from regional forces or international powers. He has highlighted the great sacrifices that Iraqis offered to their country and the region in the war against the Islamic State.

The Iranian foreign minister also met Shiite tribal leaders during his visit to Iraq in January. Iran is trying to expand its influence in Iraq outside of the state to preserve its interests in Iraq.

Rouhani's trip brought great benefits to Iran at a time that its economy suffers significantly from US sanctions. The final joint statement of the two countries highlights what was agreed, including waiving visa fees between the two countries from April onward, expressing agreement on the 1975 Algiers Agreement, dredging Shatt al-Arab, connecting the railway system between both countries in order to secure Iran’s connection to Syria via Iraq and several other economic agreements.

Iran also received $200 million from Iraq for part of its debt to Iran for the import of electricity and gas.

Millions of Iranians visit Iraq annually to make a pilgrimage to the Shiite holy shrines in Karbala, Najaf, Kadhimain and Samarra. Iraq will lose roughly $250 million for waiving visa fees.

Yet as Rouhani’s extensive meetings showcased Tehran’s push to court various Iraqi segments, Washington was quick to denounce the visit. US Special Representative for Iran Brian Hook slammed Rouhani’s visit to Iraq, questioning the motive of the visit. “When President Rouhani comes to Iraq, you have to question the motive,” Hook said in an interview with US-based Arabic channel Al-Hurra. “What Iran would ultimately like to see happen is Iraq turn into a province of Iran so that they can create a military highway across the northern Middle East that the Islamic Revolutionary Guard Corps can use to ferry missiles and weapons.”

Hook threatened that “the United States will sanction any sanctionable behavior,” adding that the United States has made an exception for Iraq to import electricity and gas from Iran for a short time. In his recent visit to Iraq, US Secretary of State Mike Pompeo discussed Iraq’s energy independence, as the Donald Trump administration strategy to counter Iranian influence in Iraq.

Yet Iraqi officials say Washington’s hardline anti-Iran stance has upped the pressure on Baghdad. Raid Fahmi — the leader of Iraq’s largest parliamentary bloc, Sairoon, and former minister of science and technology — said Iraq is under great pressure from the United States to abide by sanctions against Iran, but Iraq refuses to join any camp against another. Iraq wants to preserve a good relationship with all parties, especially its neighbors. Referencing this US policy and sanctions on Tehran in a TV interview, he lamented that “the repercussions of this situation don’t just impact Iran, they also impact Iraq.”

The recent developments of Iran-Iraq ties indicate that the US strategy to counter Iran in Iraq has not been successful. The main reason behind the failure of the US strategy is that Iraq heavily relies on Iran for most of its imported electricity, gas and food. While the United States has sent delegations from major energy companies to discuss means of increasing electricity production, potential steps couldn’t match the amount imported from Iran. Moreover, these initiatives haven't moved toward practical efforts that actually respond to Iraq's needs.

In addition, the political stability of Iraq is dependent on Iran. Iranian influence on most of the Iraqi political parties helps Iraqis to resolve their disputes and work together. Almost all Iraqi governments after 2003 were formed with Iran's political assistance and intermediation.

In fact, the United States has not offered alternative support to Iraq to encourage and enable it to distance itself from Iran, which has exploited this vacuum to expand its influence significantly in Iraq. In an interview with Iraq's Al-Ahd TV channel, prominent Iranian diplomat Amir Mousavi said that Rouhani's visit signified a dramatic transformation in Iran-Iraq relations, as the economic and security relations between the two countries has become a strategic comprehensive relationship.

Finally, the question remains whether Iraq will be able to avoid a clash with the United States and other rivals of Iran in the region, such as Saudi Arabia and Jordan, by seeking to expand economic cooperation with them as well.