If Iran joins the FATF anti-money laundering organization, the Islamic Republic might find it harder to fund militant organizations in the region, but if Iran does not join, it may lose what few international banking connections it already has. 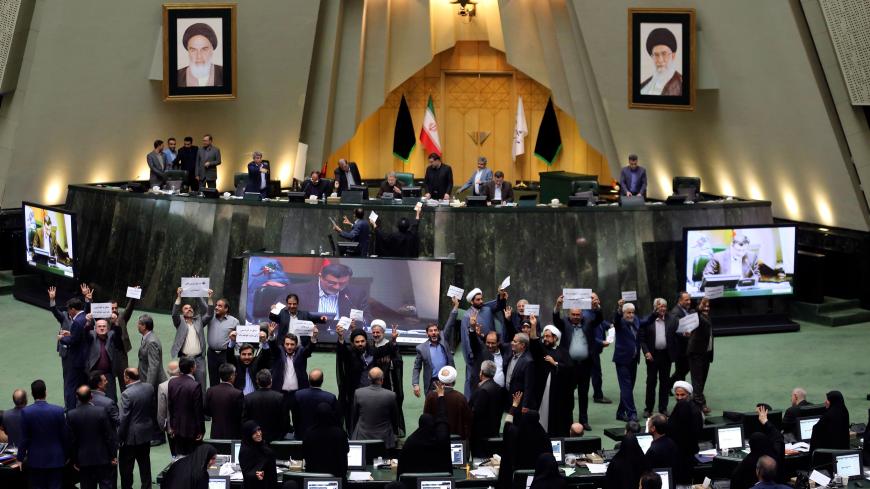 As Iran's parliament debates whether or not to join the Financial Action Task Force (FATF) — a global organization that develops policies to combat money laundering — recent developments indicate such a move on the part of Tehran would be good news for the state of Israel.

Pressure from the FATF recently forced the Pakistani government to ban a terror-related organization (Jamat-ud-Dawa) as well as a financial organization with terrorist links (Falah-e-Insanyat Foundation). According to the same report, six Pakistani banks and 109 bankers are being investigated by Pakistani authorities for opening fake bank accounts. What is even more interesting is that Pakistan is not a FATF member, but a member of Asia/Pacific Group on Money Laundering (APG). However the prospect of being moved to FATF’s blacklist has motivated it to take stringent action. Iran is currently not a member of any anti-money laundering or terror-financing-prevention treaty. Lawmakers have been debating whether to join the FATF and its associated agreements. So far, two parts of the FATF agreement have been approved by Iranian authorities. However two other requirements, namely joining the CFT (Combating the Financing of Terrorism) and the Palermo Convention (the UN Convention against Transnational Organized Crime) still need to be approved by the Expediency and Discernment Council.

There are numerous advantages for Israel if Iran joins the FATF. By joining, Iranian banks will be under what will be unprecedented international scrutiny. This will make it more difficult, although not impossible, for Iran to transfer money to terror organizations whom Israel considers as its enemies, such as Hezbollah, Hamas and the Islamic Jihad. Additionally, Iranian membership in the FATF would weaken the financial strength of the Iranian hard-liners, who have always called for a more aggressive foreign policy in the region. Such weakening would likely to come as a result of regime-affiliated economic institutions such as various bonyads (foundations) and various companies owned by the Islamic Revolutionary Guard Corps finding it more difficult to hide their financial transactions — something they have allegedly done for smuggling activities, money laundering and to avoid paying taxes.

Shadowy regime-affiliated companies that do not answer to the government play a very important part in Iran's economy. Mohsen Safayee Farahani, a member of the Reformist organization Jebhey-e Mosharekat (Participation Front) and a well-known executive with experience in several industries, told Khabaronline that 65% of Iran's economy is in the hands of 120 organizations and foundations over which there is no state control. He said that “50% of Iran's GDP is in the hands of such organizations,” in which he includes Supreme Leader Ayatollah Ali Khamenei's own Bonyad Setad Ejraiye Farmane Emam (Headquarters for Executing the Order of the Imam). Hitting the balance sheets of shadowy regime foundations and companies by making it more difficult for them to take part in tax avoidance and money-laundering activities would also be good news for Israel, as it could damage these organizations' leverage within Iranian politics. Hitting Iranian smugglers in their pockets would be also be welcome news to Israel as smugglers have played a leading role in sanctions-busting activities.

Shadowy regime economic organizations are very worried about the damage that the approval of all FATF-required conventions (particularly Palermo and the CFT) could cause damage to their activities, especially money-laundering schemes. This was demonstrated by the fire and fury shown by hard-liners to comments made by Iranian Foreign Minister Mohammad Javad Zarif Nov. 12 about Iran’s major money-laundering problems. Zarif is one of the most senior Iranian politicians to publicly address this issue. Majles parliamentarians who have been debating whether Iran should join the Palermo convention have received anonymous threats, with one member stating he had received more than 100 death threats. A member of the Expediency Council, Majid Ansari, also received a death threat.

On the other side of the coin, there are also downsides for Israel if Iran joins the FATF. First and foremost, as stringent its obligations are for transparency, and as unprecedented as they would be (if accepted) for Iran’s financial system, they are not foolproof. Shadowy Iranian organizations could come up with new ways to hide their transactions, and to launder money. The regime and its affiliate organizations have access to an army of cyber experts and specialists who could help them hide their transactions through the creation of secret parallel financial systems. Additionally, such organizations have the support of Iran’s most powerful man — Khamenei. According to a 2013 Reuters investigation, Khamenei's foundation was estimated to be worth more than $90 billion. Therefore he would have every reason to want to avoid financial transparency. And when it comes to dispatching money to organizations such as Hezbollah, Israeli intelligence says Iran is reported to be smuggling missile GPS kits to the organization in suitcases by car and even via passenger aircraft. Sending money in suitcases would be even easier. And if Iran joins the FATF, it could come up with even more ingenious ways to avoid detection in such circumstances.

Despite the downside for Israel if Iran joins the FATF, the upside is much better. Hitting Iran's shadowy state organizations in their pockets through the FATF would be of much benefit to Israel.

And if in the end Iran refuses to join the FATF, that will also have advantages for Israel as the Islamic Republic would be shooting itself in the foot. This refusal would cause the small number of foreign banks who are still taking the risk of doing business with Iran to cut off relations. Some Iranian estimates say this could cause more severe damage to Iran's economy than the Trump sanctions.

This makes it appear that, for once, when it comes to Iran, Israel is facing a win-win situation. A rare occasion indeed.