Why only Khamenei can break deadlock over global watchdog blacklist

The heavily politicized debate in Iran over whether to ratify bills necessary to exit the FATF blacklist has reached a standstill that only the supreme leader seems able to break. 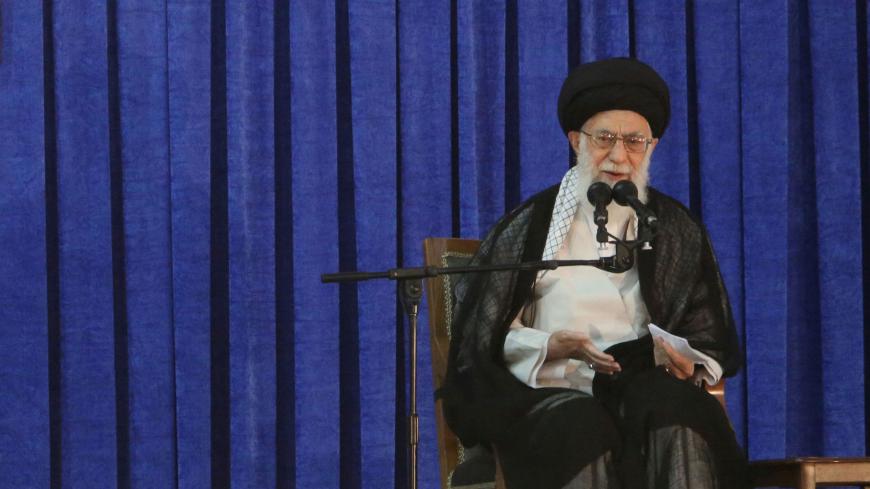 Iran's Supreme Leader Ayatollah Ali Khamenei delivers a speech during a ceremony marking the anniversary of the death of the founder of the Islamic Republic Ayatollah Ruhollah Khomeini, in Tehran, Iran, June 4, 2017. - TIMA via REUTERS

At its recent plenary meeting, the Financial Action Task Force (FATF), a global group working against money laundering and the financing of terrorism, decided against removing Iran from its blacklist while continuing to waive its countermeasures until October. However, developments following the June 29 meeting indicate a serious likelihood that Tehran will approve legislation pertaining to its efforts to permanently exit the blacklist.

On June 20, Supreme Leader Ayatollah Ali Khamenei met with parliament members and implicitly warned them against accepting parts of the proposed bills to comply with the action plan agreed with the FATF, saying, “There is no need to accept things due to some of their positive aspects when we do not know where they are leading and when we do know that they have some flaws.”

Recent reports, however, point to a potential meeting between President Hassan Rouhani and parliament speaker Ali Larijani with Khamenei over the FATF. Some parliament members have even gone as far as suggesting that the supreme leader has already hinted his agreement to measures demanded by the FATF.

Following Khamenei’s June 20 meeting with parliament members, various groups who view the FATF as being colonial and who are opposed to the Rouhani administration’s view on the issue thought that the supreme leader’s remarks would be the final word. Indeed, earlier in June, the parliament — amid intense antagonism by conservative parliament members — decided to suspend review of the CFT bill for two months.

Considering that the suspension came ahead of the FATF plenary meeting — and only weeks before the end of the previously assigned deadline for Iran to ratify the bills — most of the speculation pointed to FATF discontinuing the suspension of countermeasures against Iran. But what happened at the group’s June 29 plenary was the precise opposite, with Iran given three more months to address its action plan. This seems to have turned the page in favor of the Rouhani administration and those who favor the removal of international tensions. In an interview with the official Iran Newspaper July 3, Morteza Saffari Natanzi, a member of parliament's national security and foreign policy commission, said of the impact of FATF’s decision on the CFT bill, “This discussion has also been pursued at the level of the heads of the three branches [of government]. There has even been talk in parliament about some coordination having been made with Iran’s supreme leader. Based on this, and as far as we are aware, at least, the establishment has concluded that the four bills under review be ratified to avoid, to some degree, the more complicated issues that will be faced if they are not approved.”

Prior to these remarks, no mention was ever made about Khamenei’s implied approval of the review and ratification of the bills. One day later, on July 4, Reformist parliament member Mahmoud Sadeghi said, “The leader’s office has indicated through a message that it has no problems with the bill against terrorism financing.” Sadeghi’s statement has yet to be refuted by Khamenei’s office or figures opposed to the Rouhani administration.

There are other signs that indicate the revitalization of the stalled FATF bills. Perhaps the most important of them is Rouhani’s letter to Guardian Council chairman Ayatollah Ahmad Jannati in which he requested that the four FATF-related bills be approved faster. The Guardian Council has the power to block the ratification of bills deemed to be inconsistent with the constitution and Islamic law. So far, it has halted passage of three of the FATF-related bills that were approved by parliament, citing issues in the texts. Such moves can render the reprieve granted to Iran to implement its action plan by October moot.

Ali Najafi Khosroodi, the spokesman of parliament’s national security and foreign policy commission, believes that Rouhani’s letter to Jannati can be one indication that Khamenei may agree to revitalizing discussion over the bills. Khosroodi told Al-Monitor, “The general custom is that for requests of this magnitude, the president seeks the leader of the Islamic Republic’s opinion before taking any measures. Therefore, [Khamenei] can have a positive view in terms of the discussions and approval of the bills.”

In addition to Rouhani, Larijani also seems to be among the supporters of ratification. Following Khamenei’s June 20 meeting with parliament members, government opponents thought debate on the bills would be halted and taken off the agenda. Without confirming any such halt, Larijani said June 21, “In regard to the issue of joining the convention against financing terrorism, parliament will act based on the measures of the leader.” Two days later, Mohammad Ali Vakili, a member of parliament’s presiding board, hinted at an upcoming meeting between the parliament speaker, the president and the supreme leader. Such a meeting would not take place except to review the bills.

Parliament member Mohammad Javad Fathi thinks decisions regarding accession to FATF-related conventions will not be possible unless the supreme leader directly intervenes. Fathi told Al-Monitor, “The groups involved in this matter and the opponents [of ratification] in general do not have a clear picture about the legal aspects of the FATF, nor do they know the country’s situation well enough. In such a case, it will not be possible to wrap up this discussion unless with the direct intervention of the leader.” As such, he believes that only Khamenei is capable of convincing conservative groups as well as bodies such as the Guardian Council to ratify the FATF-related bills.

Meanwhile, the clock is ticking. Iran has only until October to clarify its decisions about whether to implement its action plan to conform to FATF requirements. If it fails to do so, it will face not only unilateral US sanctions but likely also other pressures on its economy, including the complete cutting off of its banking relations with the world.