A Beirut comic and graphic novel exhibition promoted the educational and journalistic values of the art form in the Middle East. 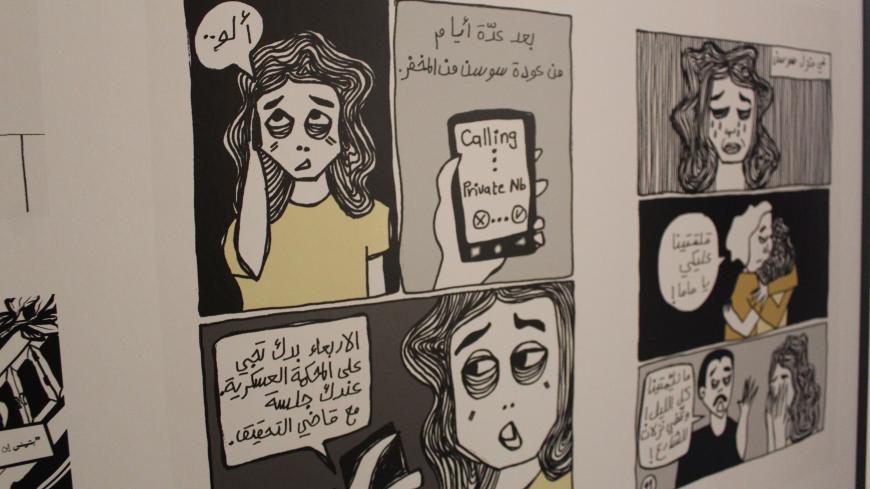 BEIRUT — The organizers of the “In-Transit” comics and graphic novel exhibition praise themselves on bringing a collection of less-known comics to Arabic readers.

“People aren't always exposed to these comics. They are not readily available; a lot of the Arabic comics are niche and underground,” co-organizer Lina Ghaibeh told-Al-Monitor. “[We] are trying to display the work here so that interest might be triggered to maybe start reading other comics.”

Dozens of artists from the Middle East came to Beirut on March 11 to be part of the exhibition at the Beit Beirut cultural space, held in tandem with the Mahmoud Kahil Award ceremony. The winners will receive $36,000 in several categories such as editorial cartoons, graphic novels, comic strips, graphic illustrations and children’s book illustrations.

Organized by the Mu’taz and Rada Sawwaf Arab Comics Initiative at the American University of Beirut, the exhibition explored the role of comics as documentation on issues of displacement, exile and homeland. It was preceded by a March 9 symposium in which experts and artists discussed displacement.

Comic books have been gaining popularity over the past decade in the Middle East, engaging audiences with issues in the region by combining nonfiction storytelling, reporting and artistic expression.

Ghaibeh, the director of the Arab Comic Initiative, stressed that comics may become an alternative way to interest and engage students. “[Some teachers] are using graphic novels for history classes. [They] found that students listen to statistics or news and consider it factual, but comics makes them understand the narrative."

The works at the exhibition tackle the Byzantine bureaucracy Syrian refugees navigate in host countries, economic instability, depression and more. “Comics are serious and can speak about serious issues,” explained Ghaibeh, a half-Syrian, half-Danish artist. “But in the region, they are still considered not only as being for kids, but as just entertainment.”

She said that the Arab world has a long history of comics that address controversial issues, especially during the “golden age” of the 1950-1980s. However, these artists emerged in “individual moments,” not through a cohesive movement, she added.

But leading up to and following the Arab Spring of 2011, Ghaibeh said, the medium “caught fire” for two reasons. Social media eased distribution and online work meant traditional institutions were unable to regulate or censor comics.

“The majority of children's comics in the Arab world were run by the state, so it was heavily propagandized," Ghaibeh said. But in Lebanon, "they were underground and challenged things like sexuality, religion and politics.”

This freedom to explore complex topics, however, came at the price of commercial viability. Ghaibeh explained, “There was no funding and no support, but they could get away with murder.”

George Khoury, a veteran Lebanese graphic novelist who spoke at the symposium and was on the advisory board of the awards, told Al-Monitor, “During my time, although we lived in the civil war, we had more freedom, more freedom to express, more freedom to publish, because we had no governments, no censorship … but [the young generation now] has less money to publish and the industry is becoming more expensive.”

With over 500 submissions to the Mahmoud Kahil Award program and 37 artists on display at the exhibition, the lack of money does not seem to be deterring artists.

Khoury explained, “[Artists now] gather through collectives, and through these they have networks. This solidarity and helping each other makes the movement more interesting and makes me think it will last.”

One such collective is the Egyptian Kawkab el Rasameen, founded by Cairo-based twins Haitham and Mohamed Raafat El-seht. The brothers won the Mahmoud Kahil Award for their graphic novel “The Hoopoe.” 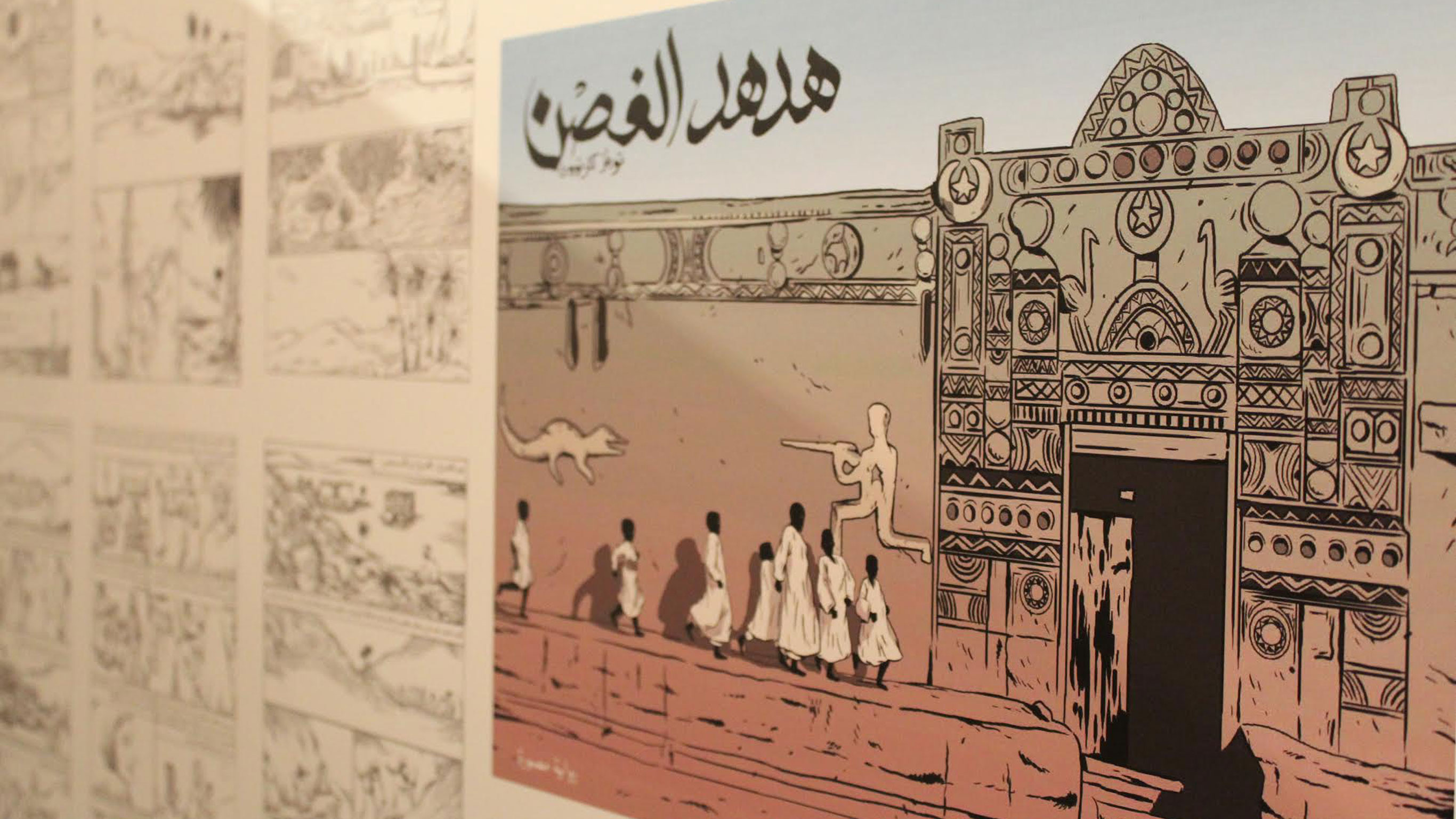 A photograph of Mohamed and Haytham El-seht's graphic novel "The Hoopoe" is displayed in Beirut, March 11, 2019. (Sam Brennan/Al-Monitor)

Their graphic novel approaches the theme of displacement through a historical and environmental lens, following the story of some 50,000 Nubians, an ethnic group of the central Nile Valley, resettled during the building of Egypt’s Aswan Dam in the early 1960s. Created under President Gamal Abdel Nassar as part of his modernization program, the dam flooded a large area of the Nubian homeland.

Mohamed Raafat El-seht told Al-Monitor, “It was a big national project and most people focused on the advantages of it. They didn’t focus on the disadvantages and how the Nubian people suffered. They had to move from their homeland of trees to a desert, and they have still not gone back. But they always have the dream.”

He explained that the graphic novel was a way to introduce audiences not just to a forgotten history but to issues often overlooked by the public.

"In Egypt they don’t think of the environment as a big topic. It is mostly politics and economics. But the [comic] is not just environmental, it is also about identity, because the Nubian people are often seen as neither Egyptian nor African,” El-seht said.

Lebanese illustrator and writer Rawand Issa agreed with him. Issa’s work at the exhibition, “Being Illegal is Unbearable,” documents the life of a Syrian student in Lebanon and the troubles of trying to stay in the country.

“The comic was about the youth who came to Beirut to study and to work. But they had issues with their papers and they had difficulties because they were Syrian, even though they had the skills,” she told Al-Monitor.

“What I do is comics journalism," Issa added. "I think that in the time we are living, imagery is very important. People are not reading like they used to, so I think today is the time for comics … Even people who are not familiar with comics are getting into it.”