Mesaha, an Iraqi comix group, had its first European debut at Switzerland's Fumetto festival, yet visa obligations stopped the artists from presenting their own works. 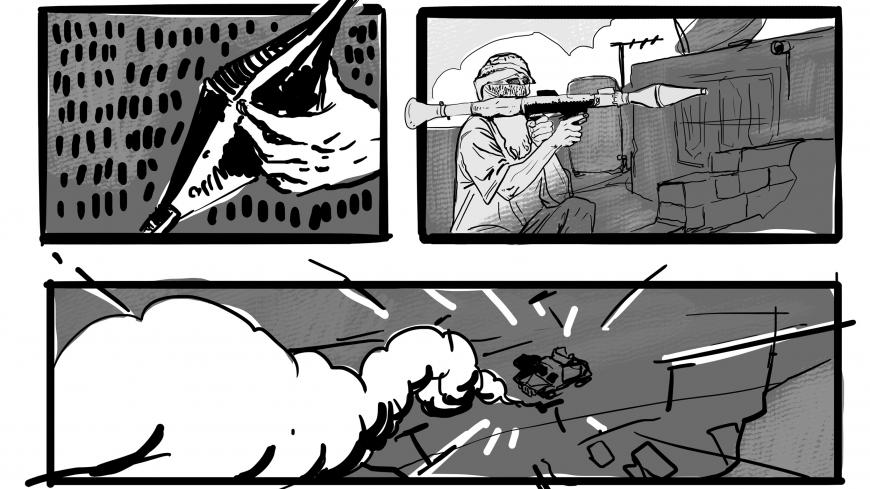 Part of a cartoon by an Iraqi artist that is on display at Fumetto 2018, one of Europe’s leading festivals for graphic design. - Courtesy of Maseha 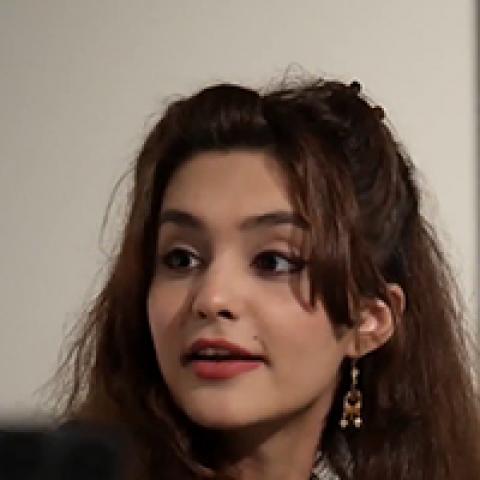 LUCERNE, Switzerland — The works of Iraqi cartoonists have inspired both curiosity and awe at Fumetto 2018, one of Europe’s leading festivals for graphic design, but the Iraqi graphic artists who drew them were conspicuously absent.

“We were expecting to land in Lucerne, Switzerland, two days before the festival began on April 14,” Iraqi graphic novelist Hussein Adil, 23, told Al-Monitor. However, the visa applications of his team of comic animators — four men and one woman — were rejected by the Swiss Embassy in Lebanon. “Everyone attended, except us. We are Iraqis,” Adil said, sighing at this lost opportunity to attend their first European comix festival.

Jana Jakoubek, the artistic director of the festival, told the Swiss French-language paper Le Temps that she felt both angered and saddened. An appeal filed by festival organizers accepted by Switzerland on April 16 came too late to enable the Iraqi artists' participation.

Adil and his colleagues are from Mesaha, Iraq’s first-ever comic strip collective. Founded in 2015 by four graphic designers including Adil, the group first came together to publish a comic book for adults. Mesaha, which means "space" in Arabic, publishes a magazine and provides workshops for graphic designers and cartoonists.

Mesaha’s illustrations that narrate the traumas and memories of Iraq’s last few decades have been displayed before, both locally and regionally, including at the CairoComix festival in October 2016. Mesaha’s participation at Fumetto 2018 was a dream come true — an opening to European comix circles for the Iraqi artists who get few opportunities to step into the international spotlight. (Fumetto is the Italian word for a speech balloon in comics.)

The team’s works were displayed in two separate exhibitions held at different venues in Lucerne as part of Fumetto 2018, which took place on April 14-22.

The exhibition titled “Mesaha’s Water Project” was held at the Sonnenberg bunker, Europe’s largest bomb shelter. The bunker was chosen for the perceived threat it may elicit for visitors, stirring discomfort comparable to the war experience of participating artists. The bunker as a symbol entwines the history of the country hosting the art with the country from where the art traveled.

The group's water-themed exhibit, which focused on man's vital relationship with water, consisted of four different narratives. One of them illustrated the words of a popular Iraqi folklore song by Fouad Salem, which is about the beauty of Iraq’s natural landscape and the comforts many take for granted. “I drew what rose to mind from its lyrics, as an oasis from a certain time and place took shape on paper,” Adil told Al-Monitor from Baghdad by phone.

Another work in this exhibit — drawn by Mays Yasser, Mesaha’s only female member — spoke of the events in Mosul after the city fell to Islamic State (IS) fighters in June 2014. The narrative is through the eyes of a boy whose father joins IS. As the boy tries to run away, to escape the perpetual cycle of death, destruction and rebirth, he sees his father by the lake. The boy tries to get his father to remember the person he once was, and they are both drawn to the lake, where they turn into fish.

The second exhibition — called "Shelter" — was held in the main exhibition hall in Lucerne. It displayed on large canvases stories from Mesaha’s comic strip “Zawaya,” which means "corners" in Arabic.

It collected six different stories that touched upon controversial subjects, including real narratives of wars. “Our work [here] addresses adult themes,” Adil emphasized. “[They are not] intended for children.”

One of the themes was honor killings. In Adil's drawings, the protagonist is not a woman but a male tribal chieftain. The story is a comic adaptation of a real-life honor killing story following a homosexual affair.

Yasser’s second work centered on a deaf girl unable but eager to hear the cacophony of war cries and artillery smothering Iraq. Watching the wincing faces of her family members as they listen, she tried to depict these sounds with her crayon. What resulted in her attempts was a monster.

The two exhibitions featured Iraqi artists expressing naked emotions about the war, including intimate feelings and commentary about volatile wars they have lived through.

Adil described the comix industry in Iraq as “lacking” and “crushed” beneath years of violence, occupation, war and civil unrest. The arts and culture sector remain chronically underfunded as a low-ranking government priority.

Adil said that years of violence have led to the collapse of the comix industry in Iraq and at present there are only two types of cartoons: children’s cartoons or grown-up comix that toe the regime’s line. Against that cultural backdrop, Mesaha, an independent venture, is a lonely voice that advocates the universality of comic art. The medium of choice, Adil said, opens a pictorial space for Iraqi youth to express situations that are personal to them. The broader aim of their works is to challenge the belief that war is the only hallmark in Iraq’s existence.

The Middle East’s homegrown cartoons — as graphic novels, cartoons strips and animations — have received recognition regionally and internationally. However, in cash-stripped Iraq, the industry is still taking baby steps and the links of the Iraqi cartoonists with the rest of the world are few. As a nongovernmental organization, Mesaha receives no government subsidy or international support.

The next leap of faith for Mesaha is to secure funding to establish its own contemporary equivalent of "dar al-funoon," a place of higher learning in Middle Eastern history, through artist-in-residence programs, where artists can collaborate and escape the confines of life in modern-day Iraq.