Against a background of growing dissent, Algeria’s ailing president has confirmed his intention to run in April’s elections; however, whether a commitment to reform and a fresh vote within the year, delivered by proxy, will be enough to quell protest remains uncertain. 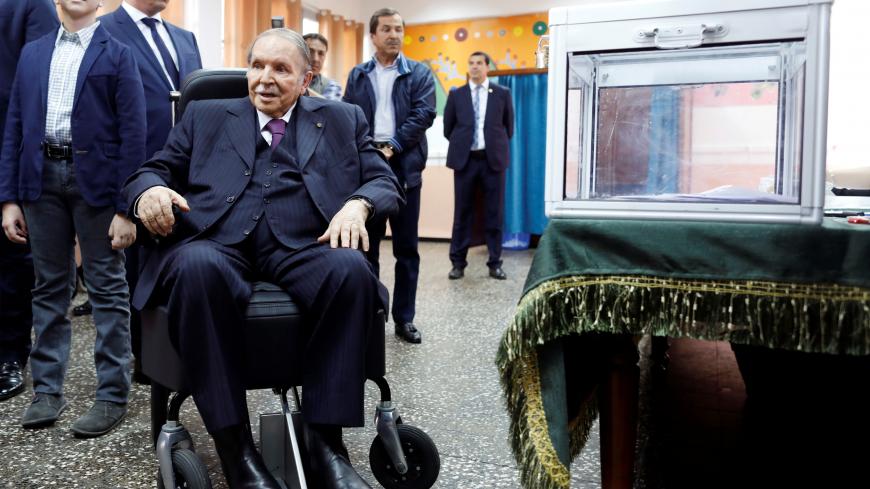 Algeria's President Abdelaziz Bouteflika looks at journalists after casting his ballot during the parliamentary election in Algiers, Algeria, May 4, 2017. - REUTERS/Zohra Bensemra

TUNIS, Tunisia — Algeria’s 82-year-old paraplegic President Abdelaziz Bouteflika has confirmed that he intends to run for a fifth term despite more than a week of widespread protests opposing his candidacy.

Demonstrations against Bouteflika’s candidacy have built in scale and momentum since they first broke out over 10 days ago, as protesters took to the streets to voice their anger against the continued rule of the octogenarian incumbent, in power since 1999.

Bouteflika has rarely appeared in public since suffering from a devastating stroke in 2013. He is currently reported to be in Switzerland undergoing treatment, with his candidacy papers entered at Algiers’ Constitutional Council by proxy.

Announcing the filing of the president’s candidacy March 3, his campaign manager Abdelghani Zaalane read from a letter purportedly written by Bouteflika, promising a fresh tranche of reforms before holding new elections within a year “in case of victory.”

However, whether these concessions will prove enough to quell the tide of protests that has rocked the gas- and oil-rich nation remains to be seen. One of the demonstrators, who identified himself as Khalil le Che, told Al-Monitor last week, “We are protesting against the system and how they see democracy. Bouteflika is just their puppet.”

Given the degree of his infirmity, demonstrators pointed to a shadowy “system,” presumed to include his brother Said plus senior figures from the army, security services, trade unions and businesses, who exerted power through the figure of the president. “We will demonstrate against the system itself, not only against the fifth term,” a member of All Against a Fifth Term, a youth organization, told Al-Monitor through social media.

Much of the nature of the current wave of protests appears to have been shaped by the country’s troubled history of dissent and protest. In Algiers, the student demonstrators chanted, “Peaceful, peaceful” and “No to a fifth term,” eager not to take any action that might inflame the security services.

During the 1990s, the country’s so-called dark decade, somewhere between 100,000 and 150,000 people were killed when a confrontation between the security services and Islamists over the result of the 1991 elections escalated into a savage civil war that lasted over a decade.

Mass protests also erupted again in 2011, with demonstrators, spurred by the revolutions in the region, taking to the streets to call for sweeping economic reform.

“In 2011, the protests were a limited extension of the Arab Spring,” freelance Algerian journalist Mohamed Amine Hocine told Al-Monitor. “And the demands of protesters in the poor neighborhoods were so economic and social that they were called 'oil and sugar protests.'”

That unrest was eventually absorbed through a generous program of state social policies, such as the subsidizing of basic foods, wage increases and the opening up of employment opportunities within the public sector that, at the time, resource-rich Algeria could easily afford.

However, with the price of oil in steady decline since 2014, Algiers’ current room for maneuver is more limited. “Today the regime can no longer buy people's silence in this way after oil revenues have fallen to less than half,” Hocine said.

Despite moves to diversify its economy, Algeria remains heavily dependent upon hydrocarbons. Currently, oil, gas and their related products make up about 30% of Algeria’s gross domestic product, while accounting for approximately 95% of the country’s total exports.

Hocine added, “The political situation is rotten to the point of nominating a helpless president for a fifth term in order to guarantee the interests of those around him. The demonstrators described the regime as a 'murderer regime,' saying, 'No for the fifth term, yes for the departure of the regime,' which makes these protests stronger and radically different from those in 2011.”

Though the interests of large swathes of Algerian society remain firmly vested within the generous state subsidies Bouteflika’s government has consistently provided, the scale of the current round of protests remains daunting and, should they continue, the possibility of a wider confrontation between protesters and the security services remains.

On March 2, Human Rights Watch warned of the dangers of large-scale arbitrary arrests and the use of tear gas by the security services. Meanwhile, in Algiers, politicians have been keen to portray the unrest as a direct threat to Algeria’s continued stability, with Prime Minister Ahmed Ouyahia on March 1 warning of a “Syrian scenario,” recalling the initially peaceful protests in Damascus that helped lay the foundations for the savage civil war that followed.

However, whether the country’s protesters, emboldened by an unparalleled series of popular successes, will be ready to accept the offer of reform and a limited term delivered by proxy from an ailing president in a foreign country remains far from certain.