Algerians continue their third week of peaceful protests against the rule of ailing President Abdelaziz Bouteflika. 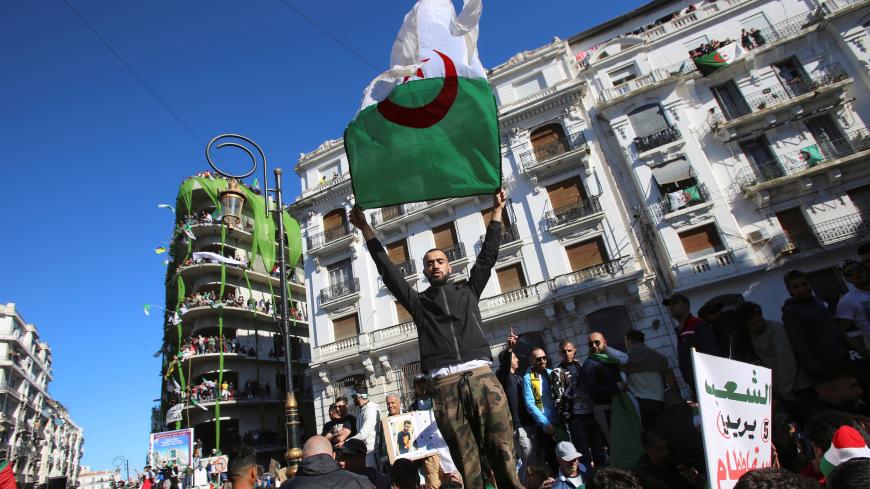 A demonstrator carries a national flag during protest over President Abdelaziz Bouteflika's decision to postpone elections and extend his fourth term in office, in Algiers, Algeria, March 15, 2019. - REUTERS/Ramzi Boudina

Algerians gathered in the hundreds of thousands in cities across the country today to maintain the weeks of peaceful protest against the continued rule of 82-year-old ailing President Abdelaziz Bouteflika and his circle.

Under relentless public pressure, the government has offered a series of concessions. However, none have quelled the tide of protest against Bouteflika’s continued rule. For protesters, both the president’s ailing health and the country’s economic and social stagnation have proven a tipping point. The country has seen years of growing dissatisfaction spill over into the widespread popular protests that have gripped the country since the initial demonstrations on Feb. 22.

“I'm here because we should all be here," one protester, who gave his name as Khalil Khalil Che, told Al-Monitor from Oran. "Everyone should be here every Friday to keep the pressure on the government. It can’t and won’t stop until we have our rights, because now the population knows everything and we know what we want."

In Algiers on Friday, as helicopters circled overhead, smiling demonstrators took selfies with watching policemen, as diverse groups of protesters, including families and children, crowded the city’s plazas chanting, “Bouteflika, get out." Some held banners proclaiming, "You pretend to understand us, we will pretend to listen to you," as thousands rallied against a president they no longer see as fit for office, overseeing a power structure they have come to regard as inherently corrupt.

“We aren't only against the government," journalist Mahraz Rabia told Al-Monitor shortly before Friday’s protest in Algiers. "We're against the government and all aspects of the system, whether it be the economic or industrial apparatuses. All the people that were born into and built fortunes thanks to the clans [networks] of the system,” including the central union, intended to represent the rights of the workers, but in essence an extension of the regime’s inner circle, or pouvoir. “Then, you have the ministers, you have the protocol system which has failed, annoyed and, especially, exasperated the whole population,” he said.

Apparent concessions by the government over the last several days have done little to quell public ire. On Monday, a statement attributed to Bouteflika postponed the country’s forthcoming elections in which he had intended to stand for a fifth term. Instead, he proposed extending his fourth term while initiating a "National Conference," to be chaired by former UN diplomat, 85-year-old Lakhdar Brahimi, designed to oversee sweeping constitutional reform. However, for many of the demonstrators, this apparent olive branch offered less than the previous offer by the president to limit any fifth term to a year, while overseeing largely the same reform program as offered on Monday.

Further to the promise of constitutional reform has been the appointment of a new prime minister, Noureddine Bedoui, who has been charged with forming a new technocratic government designed to include the voices of — and reflect the needs of — Algeria’s youth, who, despite 45% of the population being under the age of 25, find themselves adrift in a country whose ruling elite seems figuratively and generationally distant.

Though protests have now grown nationwide, cutting across all ages and social classes, it is Algeria’s youth that have served as the country’s engine of dissent. Anys Mezzaour, a 22-year-old Algerian author, told Al-Monitor there was little unusual in Algeria’s youth spearheading the protests. “This generation didn't live — or [only lived a small amount of] — the black decade,” he said, referring to the period of Algeria’s savage 1990s civil war, cited increasingly by Algeria’s leading politicians as the fate the demonstrations threaten to return the country to.

It’s “a story our old[er] brothers and sisters and/or our parents tell us.” He continued, “So the fear of having a radical Islamic power isn't real and the vast majority of people demonstrating are driven by ambitions of liberty, democracy and social justice. The majority of these people are educated, studying law, medicine or engineering. They are the future of the country."

For Mezzaour, the current generation no longer needed the tactics of past generations. Instead, it had recourse to the internet as a “weapon of mass expression,” giving Algeria’s youth the ability to channel “memes, slogans and funny pop culture references” as tools with which to vent their frustration accumulated over years of “frustration and humiliation.”

There are signs that the relentless pressure from Algeria’s youth, as well as wider society, may be bearing fruit. Last weekend, several members of the ruling National Liberation Front (FLN) resigned from their party to side with the demonstrators. Exacerbating the pouvoir’s difficulties were the anonymous comments during the week by a former minister said to be familiar with its workings, who told Reuters, “Game over. Bouteflika has no choice but to quit now.” On Thursday, former FLN spokesman Hocine Kheldoun took to late night television to urge the party to break with tradition and support the protesters, commenting that its ailing leader was “history now.”

Given the strength of opposition to Bouteflika’s rule, as well as the incumbent’s failing health, to many observers it seems impossible that the FLN does not simply select a new candidate. “Bouteflika can’t step aside because those around him still cannot agree on a successor,” Sarah Feuer, a senior fellow at the Washington Institute, told Al-Monitor. Should they continue to struggle for a successor, Feuer said, it was possible “the government could issue a more detailed timeline for the national conference, or perhaps announce steps toward a major economic reform package. But neither move is likely to mollify the protesters as long as Bouteflika remains, at least nominally, at the top.”

Even the appointment of the veteran diplomat Brahimi and the prospect of dramatic constitutional reform was far from straightforward, “So far, the protesters do not seem to be satisfied with the offer for Brahimi to chair the national conference, but that may have less to do with Brahimi himself than it does with the broader process he is reportedly being tapped to lead.

“If the regime moves quickly to invite stakeholders from a broad cross-section of Algerian society to participate in the national conference, it could imbue the process with more legitimacy and garner more support,” Feuer said.

However, with the regime finding itself forced to choose between the demands of the swaths of young people and families crowding the city centers of Algeria and entrusting them with the power to effect genuine change, its innate prejudices again appear to have come to the fore. “Brahimi himself is well respected enough among an older generation of Algerian elites,” Feuer said, “but it’s unlikely that he has much of a following among the younger generation taking to the streets.”