Turkish lawyers focus of 2019 Day of the Endangered Lawyer

The Day of the Endangered Lawyer is focusing on Turkey, where lawyers from all ideological and social backgrounds are trying to practice their profession under alarmingly increasing pressures. 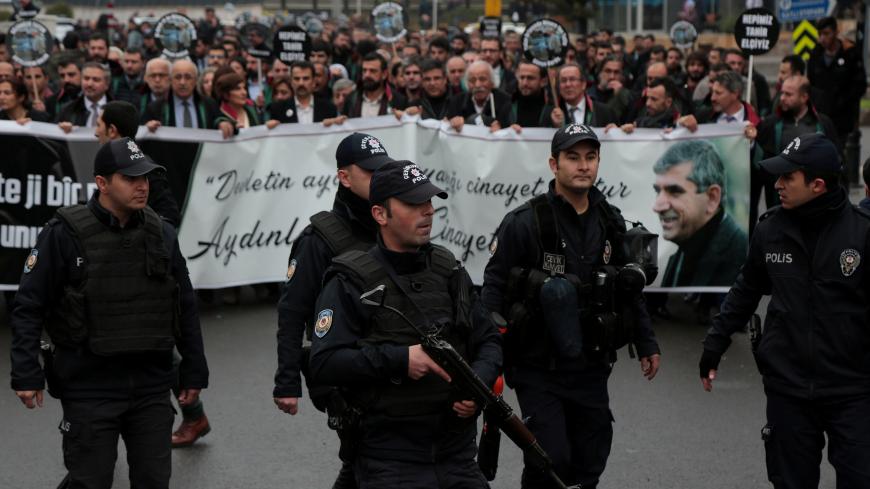 Selcuk Kozagacli, an outspoken human rights attorney and chairman of the Progressive Lawyers Association (CHD), appeared Jan. 29 at his father's grave handcuffed to a police officer. He had been brought to the funeral from his prison cell. A young attorney bending down handcuffed by his father's grave, shoveling soil with one hand, is regarded by many as a cruel and unusual punishment of critical voices in Turkey.

Attorney Didem Baydar Unsal from the People’s Law Office told Al-Monitor that Kozagacli was handcuffed for 26 hours while being transported to and from his father’s funeral. Although security personnel knew Kozagacli was not a flight risk, they did not unlock the handcuffs or let him mourn with his family for fear of their own superiors.

Unsal said that their law office had been subjected to a major judicial operation in 2013, whereby 22 attorneys were taken into custody and nine others arrested. According to Unsal, the reason for those arrests was these lawyers’ opposition to the ruling Justice and Development Party (AKP) policies. Kozagacli was imprisoned for a year along with the others.

Unsal provided Al-Monitor with a list of cases that the People’s Law Office handled in the past, some of which have been discussed in detail by Al-Monitor, such as police brutality, miners who died in work accidents and other human rights issues.

Precise numbers are not available, but Gokmen Yesil, a lawyer and chair of the CHD’s Istanbul chapter, said in an interview with Arti TV Feb. 2 that hundreds of lawyers are behind bars. In its 2017 report, the Office of the United Nations High Commissioner for Human Rights wrote that "some 570 lawyers were arrested and 1,480 faced some kind of prosecution and 79 were sentenced to long-term imprisonment."

The report issued on the occasion of the 2019 Day of the Endangered Lawyer states, “Many human rights organizations, among them Amnesty International, Human Rights Watch, IDHAE and the International Commission of Jurists, confirm that the Turkish authorities have moved beyond scaremongering, and are now rapidly taking concrete steps to shut down the last critical voices in the country’s human rights community."

Unsurprisingly, the Day of the Endangered Lawyer this year focuses on Turkey. Since 2010, the independence of the legal profession is celebrated on Jan. 24, promoting solidarity with lawyers globally who perform their profession often under great pressure. The personal and professional safety of Turkish lawyers was also a focus in 2012.

Yesil explained that the CHD has been working pro bono to help defend those in need of legal representation since 1974. He said, “When we [lawyers] are arrested we are asked why are you defending workers? Miners? Students?”

He added that the CHD takes a thorough approach in the cases they handle. On Nov. 22, 2016, security forces stormed the CHD offices around Turkey and shut them down. They also confiscated case files, including those in the high-profile murder of Armenian-Turkish journalist Hrant Dink.

Yesil also shared an anecdote. On May 13, 2014, the Soma mine disaster claimed the lives of 301 miners as the result of what was considered a preventable explosion. Yesil had traveled to Soma with his colleagues. He said, “As we were trying to help rescue operations, special forces police came and took us to a room and kept us locked in there for hours without any explanation. Finally they released us. It was only then we learned that then-Prime Minister Recep Tayyip Erdogan was visiting the town. We think they must have feared we may encourage the families to question government officials. On the seventh day after the incident, no one from the mining company had been taken into custody, but the lawyers were attacked for providing legal advice to the victims’ families. In a place where 301 miners had died, only lawyers were in custody and were brutally attacked by the police. Kozagacli suffered a broken arm resisting police brutality.”

Unsal said that in cases against lawyers there is no credible evidence, except for secret witnesses. In some cases, testimonies of these witnesses have been proven false during cross examination. As a result, defendants' lawyers are removed from the courtroom and not allowed to participate in the cross examination.

Kemal Aytac, an attorney who is also the spokesman for Justice Watch, a weekly picketing protest against the arrests of journalists and activists, which lasted 85 weeks and ended at the end of December 2018, told Al-Monitor that defendants are being left without lawyers, as lawyers are being prosecuted systematically. The exhausting and arbitrary judicial harassment follows an odd pattern. For instance, journalists from Cumhuriyet daily went through a prolonged court case, with all the attorneys involved imprisoned.

Aytac said, “Three lawyers in the Cumhuriyet case were taken into custody for five months with no legal charges. During this time we started the Justice Watch protests at the Istanbul court. The police attacked us and we suffered physical injuries. Some of us were arrested and Justice Watch has been prosecuted. While the attorneys of the Cumhuriyet case were released, those who took part in the Justice Watch protests in support of them were taken into custody.”

He added that in the last three years the pressure on lawyers has been so intense that they can no longer perform their legal duties.

Human rights lawyer Ramazan Demir, who is an honorary member of the Paris Bar Association and a representative for the Human Rights Committee of the European branch of the International Bar Association, told Al-Monitor, “In the last 15 years government intervention in the judiciary has generated pressure on lawyers like never before. Lawyers can't visit their clients in prison nor represent them properly in court. Particularly in political cases, attorneys are no longer able to have a presence; they are banned. Oddly, lawyers who dare to defend their colleagues are also prosecuted and banned from the profession.”

Demir himself has been prosecuted multiple times, arrested for taking the human rights violations during curfews in the majority Kurdish southeastern towns to the European Court of Human Rights.

The attorneys Al-Monitor interviewed stated two issues: The government is restricting their access to court files and they are not allowed to represent their clients in court, even if they are not imprisoned.

Demir and other lawyers also observe that the government’s efforts to leave political criminals without defense is aided by the ignorant compliance of justices. The government targets all lawyers, not exclusively Kurdish or left-leaning professionals, but anyone who attempts to practice law. For instance, imprisoned Islamist leader Alparslan Kuytul’s attorney, Adem Tural, was brutally attacked by the police Jan. 25 while trying to inquire about his client’s case.

Murder is not an exaggerated fear, but a real concern for lawyers in Turkey. In 2015, prominent human rights lawyer Tahir Elci was murdered in front of the cameras. Erdal Dogan, another prominent human rights lawyer, has been receiving death threats since 2011. Dogan told Al-Monitor, “There are verbal threats against my life. But also there have been men coming to my office [caught on camera] investigating about me, my life, my work habits and colleagues at the same office.”

Demir emphasized that the AKP government has used the courts to justify the curtailment of civil rights and liberties. “Judicial harassment has been institutionalized,” he concluded.