Iran's lawyers face tight restrictions and countless obstacles from the government, especially those who dare to work security and political cases. 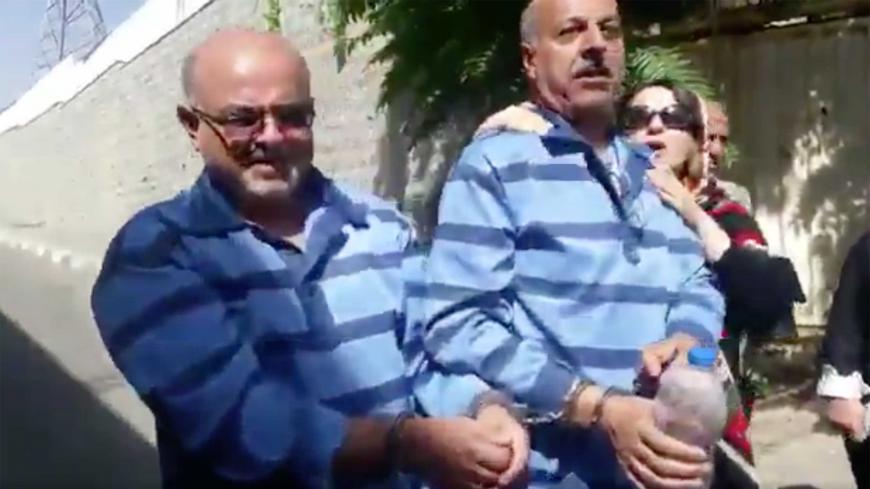 Lawyers Qassem Sholeh Sadi and Arash Kaykhosravi are seen handcuffed and shackled in a still from a video filmed Aug. 21, 2018. - Twitter/@sholesadi

When a picture of two Iranian lawyers handcuffed, shackled and wearing prison uniforms recently ran on dozens of Persian-language media outlets and platforms, it caused a storm of criticism of the Iranian authorities on social media. The two human rights lawyers, Qassem Sholeh Sadi and Arash Kaykhosravi, had been outside the parliament on Aug. 18, protesting the vetting process for electoral candidates, when they were arrested. The security forces have arrested three more lawyers since, two of whom have been released on bail.

The wave of arrests of human rights lawyers has provoked some Iranian politicians to join the chorus of people demanding fairness and justice for them. “Because the lawyers are experts in law, and the assumption is that they won’t breach the law, then they should be treated in a way that seems just to the public,” said parliament member Mohammad Reza Tabesh of the Reformist ‘Hope’ faction.

Outspoken lawmaker Ali Motahari, who serves as deputy speaker, said that he would "follow up on the issue and consult with other parliamentarians to intervene if need be.”

While President Hassan Rouhani is a lawyer himself, he has so far refrained from stepping into the debate.

Today, Iran's lawyers face countless restrictions and obstacles in performing their work, though the Iranian constitution is clear on citizens' rights to a fair trial, which naturally requires that lawyers be independent and unafraid to provide their clients with strong legal representation. The Iranian authorities have increasingly used policies and laws that run contrary to international norms and standards to undermine the independence of lawyers — including even preventing them from attending court hearings.

Iranian lawyer Hossein Ahmadi Niyaz, who has represented many political and security prisoners over the years, believes that representation by a competent and independent lawyer has become a serious challenge in the Iranian system. He told Al-Monitor, “On the one hand, Article 48 of the Criminal Procedural Code restricts the choice of lawyers in political and security cases, which is in breach of free access to legal representations. On the other hand, the intimidation and threats against lawyers not to defend those accused of political and security offenses fairly in the courts and the media is in breach of the principle of independence of lawyers.”

According to the article, defendants in cases of security and political offenses may use only lawyers who have been pre-selected — and thus preferred — by the judiciary. Legal experts widely agree that this a flagrant violation of the right to freely choose one’s own attorney.

Students' rights activists and those active in the women’s movement are prosecuted for any alleged infractions as security offenses, with many women and student activists tried and convicted of serious crimes.

Lawyers who have defended human rights activists have repeatedly found themselves on the receiving end, being tried for security offenses and allegations that they plotted against national security. Many have been sentenced to lengthy prison terms, barred from leaving Iran or fled their country. Some have given up the profession and retired to private life due to threats and intimidation by the security services, though teaching is not always an option, as many lawyers have been barred from teaching at universities. The families of these lawyers have also been threatened and in some cases beaten and barred from leaving the country. The result of this situation is that lawyers are not able to defend political prisoners fully, as an axe hangs over their heads at all times.

The impact of these violations is felt not merely by defendants, lawyers and their families. Osman Mozayan, a lawyer who has defended many clients accused of political and security crimes, told Al-Monitor, “Placing restrictions on lawyers will lead to the inhibition of freedom of speech [for all Iranians] and the general public will suffer as a result.”

The Iranian Bar Association has not been able to adequately shield lawyers from pressure as a result of their work, let alone guarantee their security. The bar association acted more or less independently prior to the 1979 Islamic revolution. Under the Islamic Republic, the authorities have taken measures to undermine the bar association and bring the legal profession under control. A law passed in 1997 gave the Disciplinary Court for Judges the task of approving or rejecting candidates for the bar. And even now, a bill proposed in Parliament would in effect dismantle the bar association and give all licensing powers to the judiciary.

Over the years, restrictions and threats against lawyers in Iran have caused many in the profession to avoid defending the people that need it most. But in the end, the outcome has not been a halt to dissent. Rather, the result has been the spread of a culture of lawlessness and disregard for the rule of law, inviting further tension and confrontation between the state and society. To counter this trend, it is high time for the Rouhani administration to work with pro-reform parliamentarians to reinvigorate the bar association and decisively act to protect and empower attorneys by giving them the legal protections they deserve.