Iran and Russia’s leaders tell President Recep Tayyip Erdogan he must acquire consent from Damascus to launch an offensive in northeast Syria against Kurdish forces. 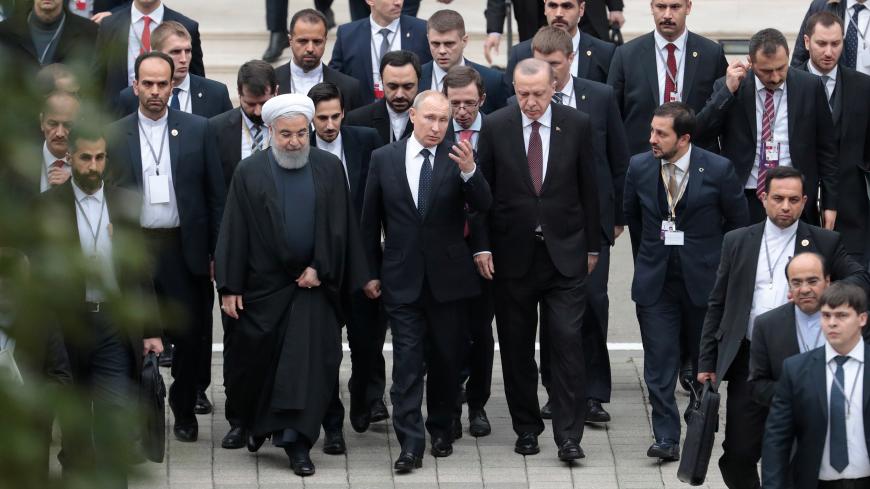 ISTANBUL — Turkey’s plans to create a buffer zone in northern Syria after the United States withdraws its forces suffered a setback on Thursday, when Russia and Iran said at a summit that any such zone would require the approval of their ally, Damascus.

At their tripartite meeting in the Russian city of Sochi, President Recep Tayyip Erdogan and his Russian and Iranian counterparts welcomed President Donald Trump’s decision to pull out American troops fighting the Islamic State (IS) in Syria, with Vladimir Putin calling it “a positive step.”

But Putin and Iran’s Hassan Rouhani argued that the area the US troops vacate must be returned to President Bashar al-Assad. "The only correct solution will be to transfer those territories under the Syrian government's control," Putin said.

For his part, Erdogan reiterated Turkey’s aim to establish a “safe zone” south of its border to rid the area of a Syrian Kurdish militia it views as a threat to its national security. But its capacity to do so without backing from the other countries with forces on the ground in Syria is highly uncertain.

With much of the international community absent from efforts to end Syria’s devastating war, Turkey, Iran and Russia have taken the lead in negotiating a political resolution, despite supporting opposing sides in the conflict that has killed more than a half million people and is set to drag into its eighth year next month. On Thursday, Erdogan said he was more hopeful than ever that a political resolution was within grasp.

But the complexities Turkey faces in working with countries with clashing interests in Syria has become more apparent since Trump’s surprise announcement in December that the United States would withdraw from Syria, creating a likely power vacuum that Turkey and its rivals will compete to fill.

Russia is urging Turkey to first seek approval from Damascus before launching an incursion into Syria, even though Turkey has refused to negotiate with Assad since 2011, throwing its support behind opposition fighters working to topple him. Erdogan has softened his stance in recent weeks, acknowledging earlier this month that Turkey and Syria have engaged in “low-level foreign policy” through their intelligence agencies.

Turkey’s priorities have shifted from ridding Syria of Assad, who appears set to remain in power with Iranian and Russian support, to clearing its border of the People’s Protection Units (YPG), the Syrian Kurdish militia that makes up the core of the Syrian Democratic Forces (SDF), which has fought alongside the United States against IS.

Erdogan has repeatedly threatened to roll in to Syria to quash the YPG, which has links to Kurdish insurgents who have waged a three-decade armed campaign for self-rule within Turkey. Before the summit, Erdogan said he wanted to coordinate with Russia on the safe zone and that the YPG’s presence there undermined Moscow’s stated aim of ensuring Syria’s territorial integrity.

“Russia and Iran are trying to reassure Turkey that its security is a real concern, but I don’t see this resulting in a green light for a military operation for Turkey,” said Marc Pierini, a former EU ambassador to Turkey and a visiting scholar at Carnegie Europe. “Nobody in Damascus — or Moscow or Tehran — will ever consent to a Turkish military operation there.”

Talks with Washington have failed to produce a coherent agreement on a buffer zone, and the NATO allies are seemingly at cross-purposes over whom such a zone would safeguard: The United States has said it is to protect the Kurds, while Turkey’s main aim is to rid the area of the YPG.

In Sochi, Erdogan expressed frustration again with the slow pace of negotiations with the United States, saying members of the Trump administration are slow-walking the withdrawal, which may now occur in April or May.

His anger over US cooperation with the YPG taps into strong anti-American sentiment in Turkey ahead of critical nationwide municipal elections in Turkey next month, in which Erdogan’s party faces challenges due to a severe economic slowdown.

“Talking negatively of the US pays off politically in today’s Turkey,” Pierini said. But the reality is that Turkey may have relied on the United States, as well as a small contingent of French troops, to contain the YPG in northeast Syria.

“There was convenience with US troops on the ground, and diplomats and intelligence, in moderating the YPG not to provoke Turkey on the border. Who can guarantee that Assad will serve Turkey’s interests by controlling the Kurds?” Pierini told Al-Monitor. “If all these Western troops go, and the Kurds are left in a void, inevitably the Assad regime has the upper hand.”

Meanwhile, battles between the SDF and IS fighters raged on Thursday, according to news reports, with the jihadists making a last stand to defend their remaining one square kilometer of territory in eastern Syria by the Iraqi border. Hungry women and children were trickling out of the town of Baghouz, where a few hundred fighters of various nationalities held out, Agence France-Presse said. US fighter jets were bombarding the area from the skies.

In Sochi, Rouhani said the Kurds were integral in shaping the future of Syria. Despite their allegiance with the United States, Syria’s Kurds have taken pains since the Syrian war broke out to avoid a rupture with Damascus, stave off a Turkish attack and retain at least some of their hard-won autonomy.

Turkey is also at odds with Iran and Russia over the fate of Idlib, the last anti-Assad opposition stronghold. Turkey wants to avoid an all-out attack on the province, fearful it could unleash a humanitarian disaster and force another influx of refugees into Turkey, where almost 3.6 million Syrians are already sheltering.

Erdogan convinced Putin to agree to a cease-fire for Idlib in September, promising to rid the province of hard-line jihadists through its influence over more moderate militants. But an al-Qaeda-linked force has since consolidated its control, effectively wrecking the cease-fire.

Putin’s patience seems to be running out, and he called for the “complete elimination of this hotbed of terrorists” at the summit. Later, his spokesman appeared to walk back the comments, saying the three leaders had not agreed to a military operation in Idlib.

Iran and Russia don’t hold all the cards. Turkey already controls about 1,500 square miles of Syrian territory after launching two incursions in 2016 and 2018, against IS and the SDF, respectively, giving it a firm spot at the bargaining table over Syria’s future.

Moscow is also keen to sell Turkey a missile defense system that could give Russian military officers access to NATO hardware. And Iran, under pressure from US sanctions, relies on its neighbor Turkey for trade and political support. Both Ankara and Tehran have squared off with Saudi Arabia in recent years.

There was one thing Erdogan, Rouhani and Putin could agree on at the summit: They all welcomed the United States’ imminent departure from Syria.