Four Palestinians have been hit with significant jail sentences after a military court in Libya declared them guilty of being affiliated with and aiding Hamas. 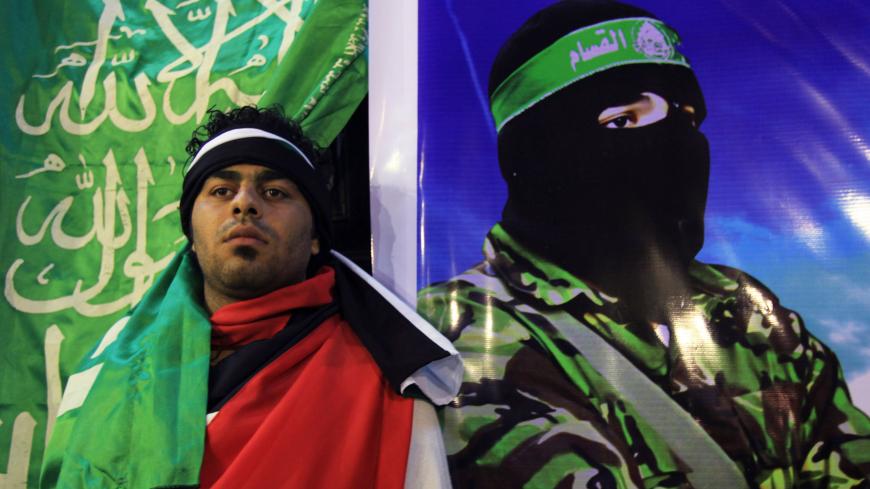 A man poses next to a poster of a Hamas fighter during a protest in Benghazi, Libya, Nov. 19, 2012. - REUTERS/Esam Al-Fetori

Hamas is denouncing a Libyan military court's heavy sentences levied on four Palestinians found guilty of smuggling arms from Libya to Hamas in Gaza, setting up a secret foreign organization inside Libya, possession of arms and conspiracy against state security. This is the first judicial security case involving Hamas in Libya.

On Feb. 21 in the Libyan capital of Tripoli, the military court imposed sentences on the men ranging from 17 to 22 years. The four men, arrested in October 2016, are Marwan al-Ashqar, his son Baraa, Muaied Abed and Naseeb Shbeir.

The Lebanese newspaper Al-Akhbar reported Feb. 22, “The Libyan judgments were based on the public prosecutor’s investigations, which included secret documents accusing the detainees of joining a legally banned organization, disclosing secrets related to national defense, ... [and] illegal possession and smuggling of firearms to Gaza.”

The detainees' family members told Al-Monitor on condition of anonymity that the detainees have lived in Libya since the 1990s. They worked for a technology company in Tripoli and studied at the capital’s universities. The detained, held at the prison of Tripoli’s Special Deterrence Force, have been denied visits for months and suffered daily abuses, relatives said.

The families expressed fear that the convicted men would be extradited to Israel, as they are accused of supporting the Palestinian resistance, and also said the Palestinian Embassy in Tripoli made no effort to get them released. One family member said, “We approached dismissed Fatah leader Mohammed Dahlan to mediate and find a solution to their case, given his strong relationship with Libyan Gen. Khalifa Hifter.” The detainees were arrested in an area under Hifter’s control.

In April 2018, even Palestinian President Mahmoud Abbas called Khaled al-Mishri, head of Libya’s High Council of State, to discuss the potential release of the detained Palestinians. Hamas has long been a thorn in Abbas' side.

On Feb. 25, Hamas denounced the “unjust Libyan verdicts” against the four Palestinians. It demanded that Libyan authorities immediately intervene to get the men released, saying they had not interfered in Libya's affairs or tampered with its security. Hamas said it had contacted several parties, which it did not identify, to solve this case.

Hamas spokesman Hazem Qassem told Al-Monitor, “Hamas is a national liberation movement fighting occupation inside Palestine. Arabs are required to offer popular and official support. Our resistance against Israel is part of the defense of Arab national security. We are keeping Israel from entering into Arab states. Hamas is keen on the security of the Libyan people, and is making efforts with several parties to solve the issue of the four detained Palestinians.”

Numerous reports in Libyan and US news outlets, citing government agencies and the United Nations, have shown a Hamas presence in Libya in recent years. In April 2018, the Libya Times newspaper reported that Ansar al-Sharia, an Islamist militia in Libya that dissolved in 2017, had supplied Hamas with arms and ammunition shipments.

In January 2017, the Libyan Interior Ministry said it had arrested a Palestinian girl in Benghazi, charging she was spying on the Libyan army for Hamas. That June, Libyan National Army spokesman Ahmad al-Mesmari accused Hamas’ military wing, Izz ad-Din al-Qassam Brigades, of training members in Benghazi how to manufacture explosive devices and use them for booby-trapping and bombing.

Hamas denied the accusations, saying its policy is not to interfere in the affairs of any Arab country.

A Libyan journalist close to Hifter told Al-Monitor on condition of anonymity, “Hamas carries out activities in Libya through the Muslim Brotherhood. This, unintentionally, draws it into Libyan conflicts. This is why it's imperative for Hamas to stay away from Libya to prevent complications. Libya is using friendly security apparatus to monitor Hamas’ activities inside Libya.”

Last week, Mustafa Laddawi, a former Hamas representative to Beirut and Syria, wrote on the Egyptian El-Zaman news website that Israel is pleased by any news of Libya prosecuting anyone accused of supplying the Palestinian resistance with weapons.

Emad Abu Awad, a researcher at the Vision Center for Political Development in Istanbul, told Al-Monitor, “This issue isn't separate from the unhidden relations between Israel and Hifter. Israel has resorted to Hifter to clamp down on the smuggling of weapons from Libya to Gaza through Sudan and Sinai. The judgments issued against Hamas members will not deter the movement from procuring weapons. Yet, Hamas will take fewer risks and avoid working in some regional countries, such as Iran, Libya, Sudan and Sinai in light of the increased regional tight security measures over it.”

It's no secret that Israel and Hifter coordinate with each other. In May, the French Intelligence Online website confirmed Israel had established channels of communication with Hifter to exchange security information aimed at curbing Hamas' flow of arms from Libya to Sudan, all the way to Sinai and Gaza.

The London-based Al-Arabi al-Jadeed newspaper in July quoted anonymous sources close to Hifter as saying he held a lengthy meeting the month before with an Israeli intelligence officer in the Jordanian capital, Amman, to boost security coordination between him and Israel.

The arrest of the four Palestinians in Libya has taken on regional dimensions. Emrullah Isler, head of the Turkish legislature's Security and Intelligence Committee and the special envoy of Turkish President Recep Tayyip Erdogan to Libya, transmitted messages asking Libyan security authorities to release the Palestinian detainees.

Islam Shahwan, a former spokesman for the Interior Ministry in Gaza, told Al-Monitor that the prosecution of Palestinians in Libya will definitely put a dent in Hamas’ attempts to procure weapons. "It's no secret that the Palestinians and others benefited from Libyan arms after the 2011 revolution," he said, and Hamas may have to look elsewhere.

Shahwan said the Palestinian Embassy in Libya might have informed Libyan authorities about the four men. “I don't expect it to play a positive role,” he said. Instead, "Hamas is seeking to employ its close relations with Dahlan and Egypt to get the four detained Palestinians released."

No one knows how things might end, despite Hamas’ efforts behind closed doors to settle this issue. Hamas’ quest won't be an easy ride amid a security crackdown by Israel and some other countries in the region.