Prime Minister Benjamin Netanyahu’s electoral alliance with the far-right Jewish Power party has created yet another partisan cleavage over Israel. 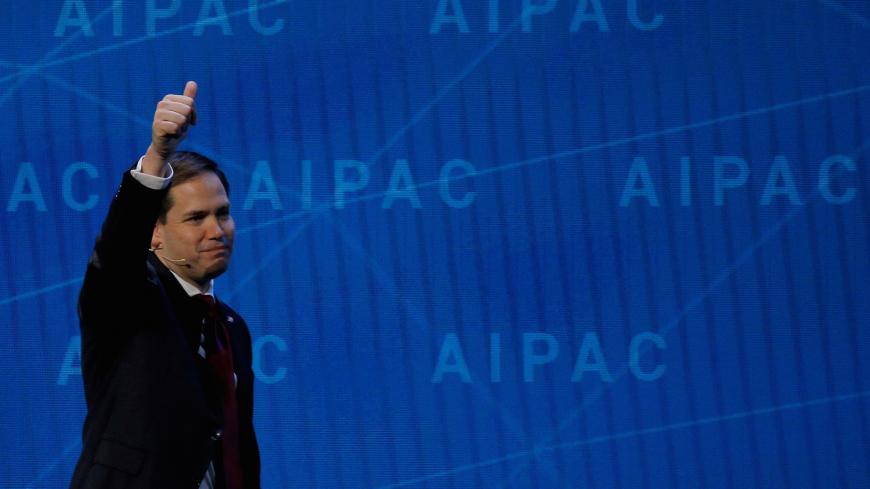 US Senator Marco Rubio, R-Fla., gives a thumbs up after being interviewed at the AIPAC policy conference in Washington, DC, US, March 6, 2018. - REUTERS/Brian Snyder

Israeli Prime Minister Benjamin Netanyahu’s electoral dalliance with the extremist Jewish Power party has opened up a rift between Republicans and key pro-Israel groups in the United States.

With the embattled prime minister casting a wide net for allies amid his escalating legal troubles, both Democrats and the American Israel Public Affairs Committee are warning that having what AIPAC called a “racist and reprehensible” party in government will make it more difficult to marshal bipartisan support for Israel. Republicans are taking the opposite approach, using the controversy to insist they’re the only ones standing with Israel through thick and thin.

“I’m not going to comment on an internal Israeli political decision and their system of government,” Sen. Marco Rubio, R-Fla., told Al-Monitor. “Ultimately our support is for the Jewish state. They’re a democracy, they have elections, so we respect that. We may not agree on every point with them … but they’re our ally and we support them.”

“I look forward to visiting Israel again and spending time with leadership there to get a better sense of the way forward,” he told Al-Monitor.

Rubio’s comments echo the position of the Republican Jewish Coalition, which is chaired by former Sen. Norm Coleman, R-Minn.

“Ultimately this is a matter for the people of Israel, not for US organizations to weigh in on,” said Neil Strauss, the group’s digital director. “Just as it would be inappropriate for any foreign elected leaders to comment on US domestic politics, it is equally inappropriate for US elected officials to weigh in on Israeli domestic political matters.”

Other right-wing pro-Israel groups have lambasted AIPAC for the way it has weighed in. The Zionist Organization of America has denounced the misgivings of AIPAC and similar groups such as the American Jewish Committee as “strange, troubling and hypocritical.”

The latest partisan flare-up comes after many Democrats soured on AIPAC when it sided with Netanyahu against the 2015 Iran deal, in what many saw as a partisan attack on then-President Barack Obama. This time, the roles are flipped.

“Prime Minister Netanyahu’s eagerness to partner with an extreme right, ultra-racist party severely undermines the core democratic values that have historically formed the heart of the US-Israel relationship,” said Logan Bayroff, the communications director for the liberal group J Street, which became a prominent political force after AIPAC alienated many liberals with its opposition to the Iran deal. “An Israeli governing coalition that included [Jewish Power] and promoted any piece of its agenda would drastically alienate millions of Americans and American Jews.”

Sen. Amy Klobuchar, D-Minn., became the first 2020 presidential contender to speak up against Jewish Power in a tweet on Monday.

“This is wrong and has been rightly condemned,” she wrote. “To quote the American Jewish Committee, ‘[the views of Otzma Yehudit] do not reflect the core values that are the very foundation of the State of Israel.'”

Other Democrats closely aligned with AIPAC shared similar views in hallway interviews with Al-Monitor this week.

“The reality is that the party that Prime Minister Netanyahu has aligned himself with is the antithesis of American values,” said Sen. Bob Menendez, D-N.J., the top Democrat on the Senate Foreign Affairs Committee. “Since America plays such a significant role in supporting the state of Israel, you have to wonder at the end of the day how can we be supportive of such an alignment.”

“Since America plays such a significant role in supporting the state of Israel, you have to wonder at the end of the day how can we be supportive of such an alignment.”

Secretary of State Mike Pompeo told CNN on Sunday that commenting on Jewish Power would qualify as interfering “in the election of a democracy.” But Menendez rejected this characterization.

“This is an outrageous coalition, and I think what AIPAC said expressed the views of most people that I know,” Cardin said. “We’re not weighing in on foreign elections. We are weighing in on a strategy that goes beyond elections.”

Jewish Power is the ideological heir of Meir Kahane, a US-born Israeli who co-founded the Jewish Defense League — a US-designated terrorist group — and the Kach party. Israel declared Kach a terrorist organization in 1994 after party supporter Baruch Goldstein massacred 29 Muslim worshippers at the Cave of the Patriarchs in Hebron.

Jewish Power’s chairman, Michael Ben-Ari, has said Israel should “mow [Palestinians] down” in Gaza. The United States banned him from entering the country in 2012 because of his support for Kahane and the Kach party. Jewish Home advocates annexing the West Bank and Gaza and “encouraging” Arab emigration.

Both AIPAC and the American Jewish Committee have focused squarely on Jewish Power and refrained from commenting on Netanyahu’s decision to bring the party into the Israeli political sphere. Neither group would comment on the record.

Daniel Shapiro, a former ambassador to Israel under the Barack Obama administration and a current fellow at Israel’s Institute for National Security Studies, said AIPAC had little choice but to weigh in given the stakes.

“American Jewish organizations generally don’t — and shouldn’t — expect to have influence in Israeli elections,” he said. “But they care about the long-term health of the bilateral US-Israel relationship, which requires bipartisan support and sustaining our common democratic values. When they see these values so openly violated, these groups have no choice but to speak out against it.”