Egyptian intellectuals and politicians are disappointed over the refusal of the Israeli leadership to advance Palestinian statehood as promised in the peace treaty, but the people in the streets of Cairo welcome Israeli tourists. 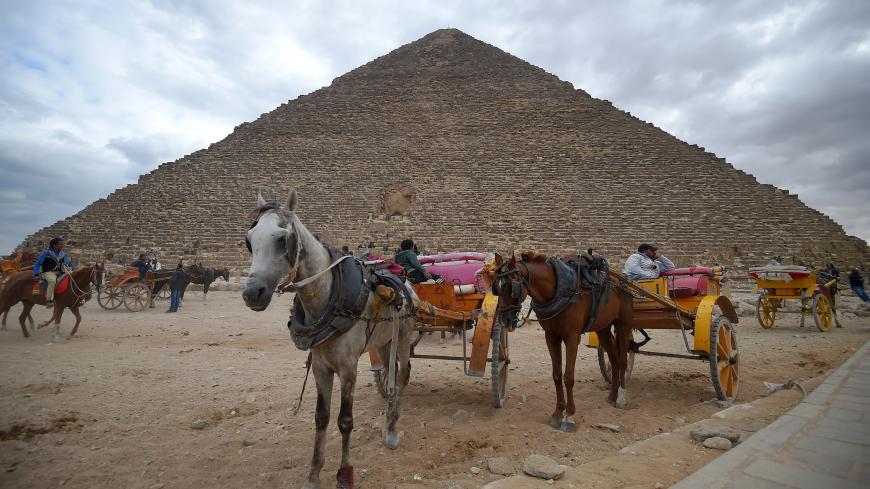 Horse-drawn carts wait for tourists by the base of the Great Pyramid of Khufu at the Giza necropolis, Cairo, Egypt, Dec. 29, 2018. - MOHAMED EL-SHAHED/AFP/Getty Images

The public address system at Ben Gurion International Airport called on the last passengers of Air Sinai flight 4D 55 to present themselves at the exit gate. Flight attendants wearing Egypt Air uniforms greeted boarding passengers. The website of Egypt’s national airline makes no mention of Tel Aviv. Air Sinai, its subsidiary for the Cairo-Tel Aviv route only, does not have a website at all.

This unique arrangement, which is part of the Israel-Egypt peace treaty, distills the essence of the relationship between Israel and Egypt as they mark the 40th anniversary of their March 1979 peace treaty. While they have reciprocal embassies, their leaders do not visit each other. While the Egyptian elites boycott the Israelis, the people welcome them warmly.

Slightly over an hour after takeoff from Israel, a guide led a group of 26 Israelis toward the passenger terminal at Cairo International Airport. In the line for passport control, a silver-haired man from the group told Al-Monitor that his children had urged him to forego the “dangerous trip” to an Arab country. Another woman from the group said that when friends heard she was traveling to Egypt, they told her she was “insane.” Meanwhile, police officers glanced quickly at the visas stamped in the visitors' passports by the Egyptian Embassy in Tel Aviv, and sent them on their way — quicker than the border control procedures at New York’s airports.

Israeli travel agencies can barely keep up with the demand for tours to Egypt. Eight years after the 2011 revolution that drove tourists away from the pyramids and the Pharaonic temples of southern Egypt, Israelis are storming their southern neighbor. “Usually this is the first Arab country most of them have visited,” veteran tour guide David Negev of the Ayala tour agency told Al-Monitor. “They arrive with some trepidation and go back home as envoys of peace,” said Negev, who has made the trip 70 times.

Cries of “Shalom” and “Welcome” in Hebrew greet the group at Cairo’s bustling Khan el-Khalili bazaar. “Twenty pounds [$1.14] is nothing for you,” one of the merchants half-jokes with an Israeli tourist haggling over the price of a galabia [a long, loose outer garment]. “We know that all of you in Tel Aviv are millionaires.”

Official data reflect the tremendous gap between the two neighbors. An economy of 100 million exports one-third the amount exported by a country of 8.5 million — $20 million and $56 million annually, respectively. Israel has a per capita gross domestic product of $37,000 compared with Egypt’s $12,700. A falafel serving that costs 17 Israeli shekels ($4.70) in Tel Aviv sells for 3.50 Egyptian pounds ($0.20) in Cairo. The population explosion and climate change do not augur well for Egypt’s global economic rankings, especially compared to the Israeli economy.

Every spring, Israeli children recite the Haggadah, the Jewish text purporting to describe the Israelites' exodus from slavery in Egypt, which places the children of Israel on the same ancient stage as those of Egypt. There is nothing like a visit to the temples of the dead and the 5,000-year-old wall paintings of nobles to put the Jews in their proper place on the historical spectrum of the Middle East. Archaeological findings from the time of Pharaoh Thutmose III (1490-1450 B.C.) indicate to visitors that the Land of Israel was a small Egyptian province in those days. Egyptian history also hints at the dangers of a personality cult nurtured by a shortsighted leader. How short and fleeting might be 40 years of peace standing on one (unsteady) leg.

After the hearty encounter with the bazaar traders, members of the Israeli group wondered why the relationship with Egypt is said to be a “cold peace.” They were surprised to hear that Egyptians feel Israel misled the architect of the peace treaty, their late President Anwar Sadat. Egyptian intellectuals feel cheated when they see Israeli soldiers chasing Palestinian children in the West Bank town of Hebron and when they hear Prime Minister Benjamin Netanyahu pledge that a Palestinian state would never be established on his watch. Journalists and intellectuals recall the stark warning issued by their president from the Knesset podium in November 1977 that “in the absence of a just solution of the Palestinian problem, never will there be that durable and just peace.”

On March 31, almost 40 years to the day after Israel signed its first peace agreement with an Arab nation — a move that got Egypt kicked out of the Arab League — leaders of this organization will convene for their annual summit in Tunis. Barring shocking surprises, most of the Arab leaders will vote to ratify the Arab Peace Initiative they first approved in March 2002. Barring shocking surprises, this time, too, leaders of Israel’s major political parties running for the Knesset in the April 9 elections will avoid giving a direct answer to the historic Arab proposal for the Jewish state to become a full-fledged member of the Levant.

The Eretz Israel Museum in Tel Aviv is hosting an exhibition titled “Jacqueline Kahanoff: The Levant as a Parable.” Kahanoff (1917-1979) was a Cairo-born literary critic and writer who immigrated to Israel in 1954. Kahanoff, dubbed the “high priestess of the Levant,” repeatedly challenged the dismissive arrogance displayed by the West toward the East and the adoption of this attitude by Israelis of Oriental origin. These days, she could have added feelings of hatred and fear to the attitude of her fellow Israelis from the Levant toward their Arab neighbors.

On Feb. 19, Haaretz ran the introduction to her volume of essays “From East the Sun, 1978,” edited by Israeli poet and translator Aharon Amir. Kahanoff wrote that rebuilding a pluralistic Levant could provide an important framework for people to enjoy being free, different and equal. Not one in which “the superior one” enslaves and eliminates, or at most tolerates others in the name of universalism. It would be interesting to know what Kahanoff would have said about the alliance forged with Netanyahu’s blessing with the racist disciples of Rabbi Meir Kahane (the merger of national-religious HaBayit HaYehudi with radical-right Otzman Yehudit, endorsed by Netanyahu) and about the prevailing incitement against Israel’s Arab citizens.

The public announcement system at Cairo International Airport urged all passengers on Air Sinai flight 4D 54 to present themselves immediately at the exit gate. The lit-up sign behind the Egypt Air check-in counter said “Tel Aviv.” Someone snapped a photo as a memento — just to be on the safe side.