Iraq's young archaeologists are remembering their inspiration and frequent mentor Lamia Gailani, who worked hard to restore her country's lost heritage and encourage new scientists to explore the field. 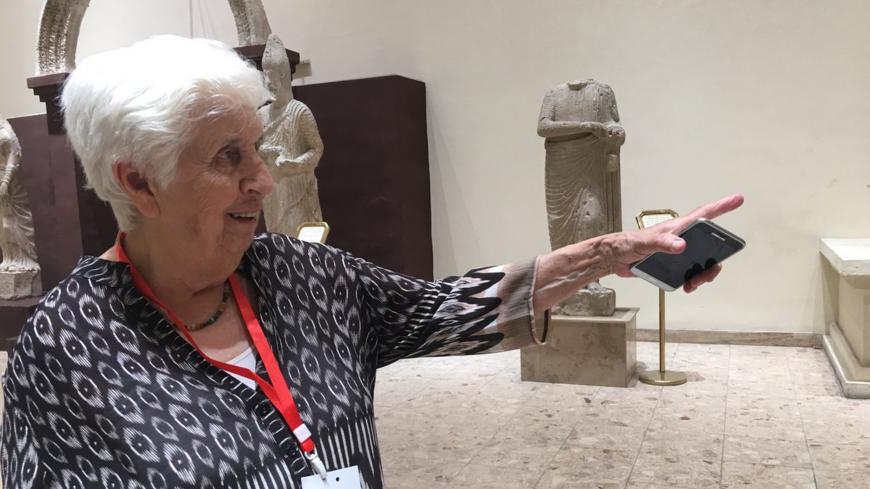 Dr. Lamia al-Gailani was Iraq's best known archaeologist. She helped and inspired many young archaeologists in her country. - Twitter/jane arraf

Junaid Amer Hameed, a young archaeologist from Baghdad, was working as a guide at the National Museum of Iraq in 2016 when he met Lamia al-Gailani, Iraq’s iconic archaeologist.

She had heard that Amer was interested in archaeology and asked to meet him. "She asked if I prefer to work as a guide or to focus on my specialization in cuneiform studies. I told her working at excavations is the dream of every archaeologist, besides other tasks," Amer said. “She was the best supporter of the museum in its constant endeavors to recover its treasures [after being looted in the 2003 US invasion]. She also supported the training of its staff through workshops outside the country.”

"She liked supporting the youth," he said. "Two days before she passed away, she was in Amman attending a workshop to train curators protecting the cultural heritage of Iraq and Syria."

Amer, who now works in the museum as an Assyriologist, is one of the new generation of Iraqi archaeologists who were influenced and inspired by Gailani, who died on Jan. 18 in Amman at the age of 80.

The world will remember Gailani as the archaeologist who helped Iraq’s national museum recover from wartime looting, but the help and inspiration she has given to the country’s young archaeologists will be remembered just as much as her expertise in cuneiform seals and her tireless work of cataloguing her country’s heritage.

"This is the duty I owe to my distinguished professor, Dr. Gailani," Culture Minister Abdul-Ameer al-Hamdani, an archaeologist himself, wrote on Facebook. "I will be keen to gather and document her unique heritage,” the minister said without further detail. Archaeological circles think the ministry may produce a special book on her works.

Mourners carried Gailani's flag-draped coffin during her Jan. 21 memorial in the National Museum in Baghdad, where she started working in 1961 as a curator.

From the 1980s on, Gailani spent most of her time in the United Kingdom. However, she visited Iraq every year. Her visits did not wane under the sanctions in the 1990s and in March 2003, when the US forces invaded Iraq, she was not only there but among the first to enter the looted national museum to see what remained.

Thousands of artifacts were lost, including 7,000 cylinder seals, Gailani's main interest. Gailani worked with the US-affiliated Iraq Reconstruction Management Office and helped assess the damage and catalog the remaining objects. Her work helped recover thousands of priceless objects. When the museum was eventually reopened in 2015, its collection, though impressive, was a pale shadow of what it was.

But she also invested in the archaeological community, helping like-minded young people whenever she could.

Zaid Issam, a 27-year old Iraqi architect and master's student in cultural preservation at the Jordanian German University, met Gailani in 2017 at a training workshop in Amman for the staff of the Baghdad, Sulaimaniyah and Basra Museums in coordination with Columbia University and The Metropolitan Museum in New York.

Issam just walked into the workshop thinking it was open for the public, though it was not. "But she noticed my passion and she invited me to attend the workshop and even sent me an invitation the next time," he said. "She was an encyclopedic figure, quite knowledgeable beyond her specific specialty," he added. "She kept pace with the developments in archaeology and worked hard to promote the abilities of Iraqi professionals."

Issam remembered her supplying Baghdad with cutting-edge equipment to catalog the museum's contents and her meticulous work identifying and curating the statues from Hatra, a 2nd century CE city and trade center in the Parthian Empire.

"Back at Baghdad University, I was familiar with the name Lamia Gailani, which was connected to cylinder seals and the archaeological site of Tell edh-Dhiba'i near Baghdad," Helen Malko, a young Iraqi archaeologist at Columbia University, NY, told Al-Monitor. "Later, I had the chance to meet her in person and spend some time working with her at the Metropolitan Museum of Art. She was enthusiastic and inspiring."

Malko went on, "One afternoon I joined her to look at drawings of a few cylinder seals that had [just been discovered] by Iraqi archaeologists in southern Iraq. She kept her good humor as we struggled with deciphering the iconography on them.”

She addded, "Gailani was and will remain a role model for many, especially for Iraqi female archaeologists and museum professionals."

Though Gailani lived a good part of her life abroad, "she visited Iraq at least once a year, taking books and other supplies to her colleagues in the museum, bringing out Iraqi publications to sell (not at a profit!) so people abroad could know what was going on," said Jane Moon, co-director of the Charax Spasinou Project, an archaeological excavation project in a site founded in 324 BCE by Alexander the Great.

Moon, who knew Gailani since 1970s, said that the archaeologist was very helpful when she and her husband wanted to start a field project in Iraq in 2012.

"I didn't know where to start," said Moon. "She advised me where to go and talked to the people running the State Board for Antiquities and Heritage, recommending us to them and explaining that we genuinely wanted to help Iraqi archaeology. It was a strange request for an excavation permit at the time, but thanks to her, it was granted to us."

"She was a wonderful person," said Barnadet Hanna al-Maslob, an Iraqi archaeologist and former curator of the Cultural Museum of Mosul. "I met her for the last time in June 2018. On the graduation ceremony of a workshop hold in London, she told me, 'Do not care about getting old and approaching retirement. Work and learn as if you have just begun your career! archaeology is not a job; it is about pleasure and art."

In 2016, Gailani worked with the UK-based charity Friends of Basra Museum to set up the Basra Museum.

"It was a huge challenge, as there were [efforts] in Baghdad to stop the project," said Moon. "Lamia managed to sort it out. I have heard she would take time to talk to students at conferences, and not spend all her time with the other important folk. That would be typical of her."

Being well educated both in Arabic and in English, Gailani could access sources in both languages. "She was a bridge between Iraqi and foreign scholars," she said.

As a young archaeologist, Malko considered Gailani a major source of inspiration. "She was working with the British Museum to help train the people at Basra Museum," she said. "She is a role model for all of us, especially as women, on what we could achieve."