In a rare move, the British Museum returned eight antiquities, which had been looted from Iraq in 2003, to the country. The objects will be placed at the Iraq Museum. 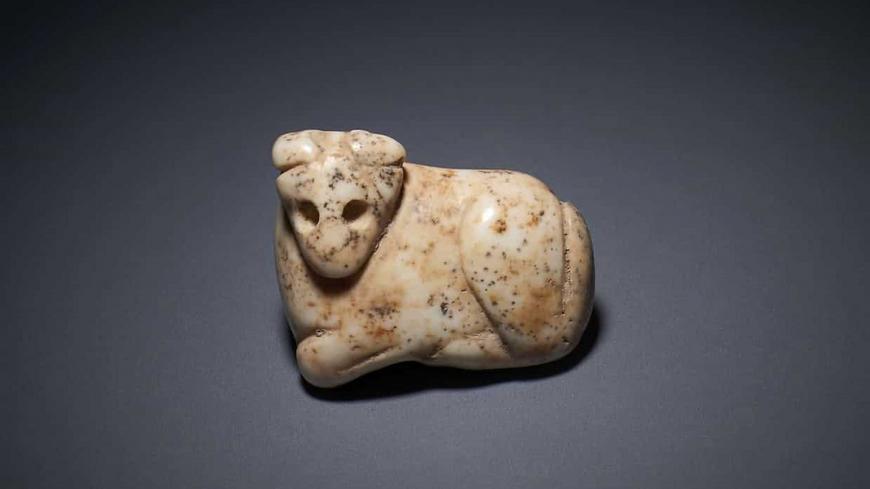 A tiny marble amulet of a bull, one of the looted Girsu treasures that was returned by the British Museum to Iraqi authorities in London, Aug. 10, 2018. - British Museum

Happy endings are rare for looted archaeological materials. This may well be why a private ceremony at the British Museum on Aug. 10 grabbed headlines around the world. Eight objects from Iraq, five of them inscribed in Sumerian cuneiform, were handed over to Salih Husain Ali, Iraqi ambassador to the UK. In a matter of months, they will arrive at the Iraq Museum, where they will likely be put on display.

Until now, this was the case for eight objects from Iraq. The objects — including three inscribed fired clay cones; a polished and inscribed river pebble; an inscribed white gypsum mace-head; a marble amulet pendant and a red marble square stamp seal, both dating from the Jemdet Nasr period (circa 3000 B.C.); and an Achaemenid-period white chalcedony "sphinx" stamp seal — had been looted after the US-led invasion of Iraq in 2003. The objects subsequently found their way to a London-based antiquities dealer and were seized by the police in May of that year.

However, this year, archaeologists working with the British Museum’s Iraq Emergency Heritage Management Training Scheme, known as the Iraq Scheme, have been able to establish the objects' original location with astonishing accuracy: They are from the ancient Sumerian site of Girsu, modern Tello, in southern Iraq.

Girsu, located in the southeastern corner of ancient Mesopotamia, is considered by archaeologists to be one of the earliest known cities in the world. The Iraq Scheme has conducted excavations here, and at the site of Darband-i Rania in Iraqi Kurdistan, since 2016.

In 2015, Sebastien Rey, a lead archaeologist on the Iraq Scheme, was working with Iraqi colleagues to survey, record and collect evidence from a series of robber pits on Tell A — Girsu’s so-called Mound of the Palace.

He explained to Al-Monitor that to fight the trade in Iraqi antiquities that began in 2003 and has increased since the looting of antiquities by the Islamic State, the British Museum and its Iraqi colleagues are trying to create an effective protocol to identify objects and intercept the trade. Rey describes the early protocol stages as similar to documenting a crime scene.

The evidence they collected at Girsu included broken clay cones with Sumerian cuneiform inscriptions that indicated they came from a temple. The inscriptions read: "For Ningirsu, Enlil’s mighty warrior, Gudea, ruler of Lagash, made things function as they should [and] he built and restored for him his Eninnu [temple], the White Thunderbird."

Cones are endemic across Mesopotamian sites, yet Rey explained that the inscriptions confirmed what they already knew: that these were “dedicatory, ‘magic’ cones" that were placed in the temple's mud-brick walls to "protect the sacred space" against evil forces. The cones show that by building the temple, “Gudea is maintaining the cosmic order against chaos.”

In Rey’s words, “The eight Sumerian objects may be small, but they nevertheless have a very important and powerful symbolic value.”

The mention of a temple in the inscriptions encouraged the Iraq Scheme archaeologists to conduct further searches around Tell A. In 2016, they found and excavated a temple from the 3rd millennium B.C. in exactly the same area as the robber pits. Inside the temple walls they found the same types of cones with the same inscriptions.

Finally, in 2018, when the London Metropolitan Police turned over the collection of looted objects to the British Museum for analysis and conservation, the archaeologists quickly realized that included among the looted objects were the same cones with the same inscriptions as those they had found at Girsu. Not only that, but comparisons between excavated material from levels underneath the temple, from the 1st millennium B.C., and the other looted objects soon showed that they were also from the temple.

“It’s usually so difficult to prove provenance, but in this case it was really simple,” Rey said.

What perhaps is less simple about this case is the issue of repatriation. Returning objects to their country of origin is a problematic, controversial and frequently debated issue.

Some countries have tried for years to secure the return of their cultural heritage without success: Greece’s request for the return of the Parthenon Marbles, which are housed in the British Museum, is the most obvious example; the museum’s failure to repatriate the Benin Bronzes, which were taken by British forces in 1897, is another more recent example.

In cases like the Parthenon Marbles, archaeologists tend to argue that the antiquities were legally bought and sold. Rey said, “We need to make sure that we distinguish between [the repatriation of] objects that were [recently] looted and sold on the black market and objects that were acquired legally 100 years ago. These are two completely different things.”

Dr. Lamia al-Gailani, a former employee of the Iraq Museum and a researcher whose primary study material is objects from the museum, agrees/ She told Al-Monitor: “90% of what they have in the [British M]useum was brought legally when Iraq was part of the Ottoman Empire.” She is happy about the return of the objects —“It’s fantastic, a first in archaeology”—but she is not demanding repatriation for all Iraqi objects: “The Lion of Babylon [is] a symbol of Iraq that you have on banknotes, you have it everywhere, [yet] this is booty from Turkey, should we take this back to Turkey?" she said. "That’s history, you can’t go back.”

Hashem Bahr Alolom, spokesman for the Iraqi Embassy in London, seemed to suggest that Iraq had bigger fish to fry. “The concern in Iraq now is mainly focused on preserving our heritage, especially after Daesh [Islamic State],” he said.

He told Al-Monitor, “The return of these artifacts [is important for Iraq because it] means we have regained sovereignty over part of our stolen history. There is a huge cooperation from the international community with Iraq and we certainly look for more looted artifacts to return to their homeland.”

As for the future, Bahr Alolom provided some poignant food for thought. “When I carefully touched the artifacts after they were handed over to us … I really felt connected to [Iraq’s] old civilizations, wondering how these small pieces survived … wars, natural factors and disasters, development … to tell us the story of … our ancestors. All that you can do is stare at them and wonder how much these stones witnessed over their 5,000-year journey to 2018.”