With the reimposition of US sanctions, the trickle of trade between Iran and the United States could vanish altogether. 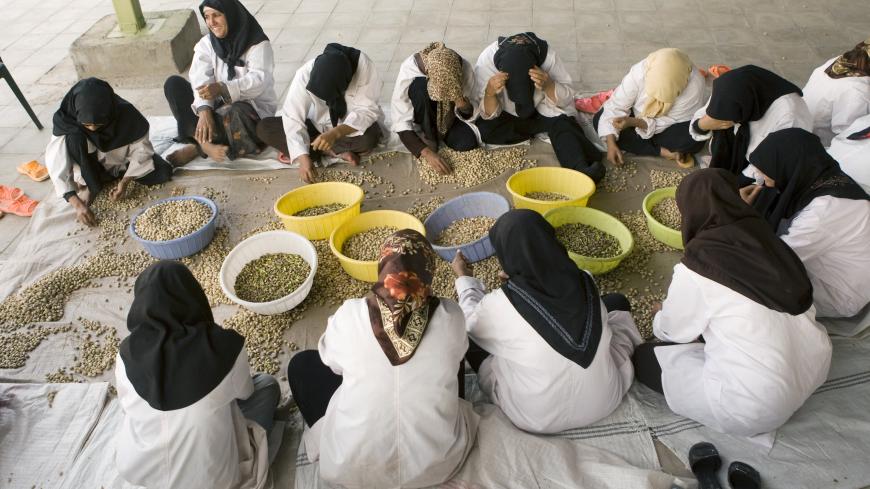 Workers sort pistachios by hand during a final inspection before packing at a processing factory in Rafsanjan, 1,000 kilometers southeast of Tehran, Sept. 23, 2008. - REUTERS/Caren Firouz (IRAN)

Amid hopes among many Iranians that the 2015 nuclear deal would revive Iran’s economy after years of isolation, trade ties began to expand — including with the United States. For instance, according to data released by the US Census Bureau, with the removal of sanctions in 2016, Iranian exports to the United States — chiefly consisting of carpets, caviar and pistachios — increased over 700% from $10.7 million in 2015 to over $87.7 million in 2016. However, Iran’s exports to the United States in 2017 dropped again to some $63 million and remained relatively in the same range ($68 million) from January to November 2018, when US oil and banking sanctions against Iran were reimposed in the aftermath of President Donald Trump’s withdrawal from the nuclear deal.

Although tensions between the US and Iran have increased since Trump came to power, a closer look at the US Census data reveals that despite a relatively stable import rate from Iran since 2016, US exports to Iran — which had been sliding since the nuclear deal was implemented in 2016 — saw a turnaround last year, paradoxically after Trump withdrew from the nuclear deal. Indeed, US exports to Iran have witnessed a sudden spike since July 2018, coinciding with China’s decision to impose retaliatory import tariffs on US agricultural goods.

Esfandyar Batmanghelidj, the founder of Bourse & Bazaar, which tracks developments in Iran’s economy, told Al-Monitor, “The only reason that the 2018 export total is so high is that there is a surplus of soybeans in the American market due to the China-US trade war. Some of this surplus has been diverted for export to Iran, adding hundreds of millions of dollars to the export totals over the year.”

According to the Census data, US exports to Iran, which had dropped to less than $9.5 million in June 2018, increased to some $35.7 million in July before reaching a year-high of about $150 million in August. In the next three months leading to November 2018, some $190 million worth of more US goods were exported to Iran. Yet, Batmanghelidj added, “Ignoring the sale of soybeans, exports of medicine and medical devices are actually slightly lower than during the Obama era.”

This is while US imports from Iran saw a year-high value of nearly $25 million in July before reaching as low as $300,000 in November 2018. With over $435 million of exports to Iran and imports of near $68 million during the first 11 months of 2018, the total volume of trade between the United States and Iran surpassed $500 million — the highest level of trade between the two old foes since 2009. Although data for the last month of 2018 has not yet been released, imports from Iran are likely to be lower if history repeats itself considering the reimposition of US sanctions on Iran on Nov. 5.

While Iran has been under US sanctions for decades, the two countries have always maintained trade — even though the volume might not have always been significant. Indeed, there has only been one instance — in 1998 — when trade between the two countries was completely halted, according to US Census data. According to Batmanghelidj, who has been engaged in promoting economic diplomacy between Iran and Western countries following the signing of the nuclear deal in 2015, “US exports to Iran are basically limited to three categories: agricultural commodities, medicine and medical devices. US companies can export these humanitarian goods to Iran due to sanctions exemptions and licenses. As such, nothing about this trade points to a failure in sanctions.”

Indeed, according to the US Treasury Department, “Under US law, the sale and export of nearly all types of food and medicine to Iran are broadly authorized and require no specific license or special authorization from the Department of the Treasury’s Office of Foreign Assets Control (OFAC) or any other agency of the US government.”

Reza is a 55-year-old Iranian businessman with over 25 years of import/export experience. Speaking to Al-Monitor, he said that Iranian exports of carpets, pistachios and caviar are the most important aspects of trade with the United States since the American market has always been the main destination of such Iranian products. "Through our export to the United States, we were able to introduce the Persian carpet and other goods like our caviar to the world,” Reza said, adding that this trade “is very important in terms of both income for Iranian producers and in terms of branding."

But with Trump's decision to ban the import of Iranian carpets and foodstuff, Reza believes that "trade with the United States has no significance since we've lost our core competency in export and this could result in near-zero Iranian exports to the American market."

With the US embargo on Iran again fully in action, the outlook of trade between the two sides don’t appear to be positive. “The American companies that have been exporting to Iran are those that have had longstanding business relationships and already possess any necessary licenses from OFAC,” Batmanghelidj told Al-Monitor. He added, “OFAC has been reluctant to issue new licenses, so it is very unlikely that US-Iran trade will expand in the coming year beyond the current categories, particularly given the political climate.”

Yet even as tensions between Washington and Tehran continue to run high, there are experts who believe that there is one factor that could partly uphold the limited trade between Iran and the United States: the trade war between the United States and China. However, conversely, in the words of Batmanghelidj, “Once the Chinese market opens again, it is unlikely that US soybeans will continue to be exported to Iran.”