Hamas leader Yahya Sinwar reportedly proposed three scenarios to change the deteriorating situation in Gaza, including allowing the UN or Egypt to deploy in the besieged enclave. 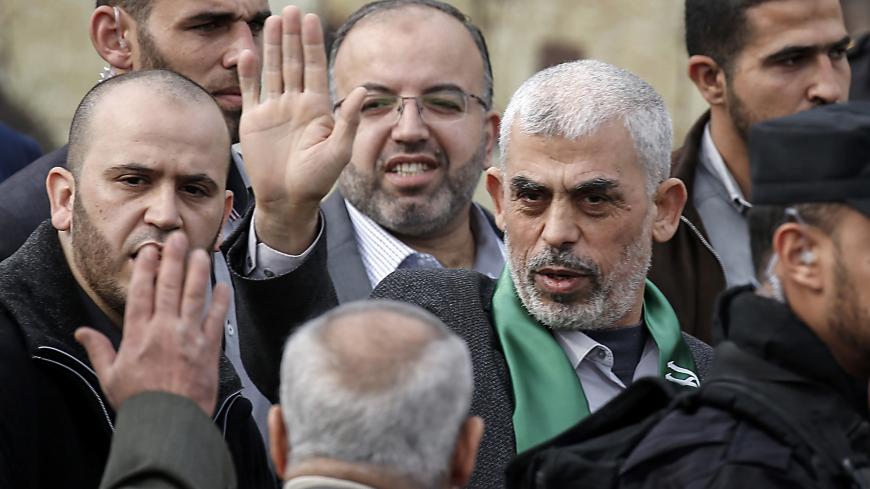 As the Palestinian Authority (PA) has yet to lift the sanctions it has imposed on the Gaza Strip since March 2017, Hamas took control Feb. 17 of the Kerem Abu Salem border crossing with Israel, Gaza’s only trade crossing. The PA employees at the crossing withdrew following a dispute with Hamas security services over procedures.

Hamas had handed control of Kerem Abu Salem to the PA as part of an October 2017 reconciliation agreement, which has reached an impasse.

Hamas’ new control over the crossing is expected to increase the revenues of Hamas-run Gaza ministries, which could help alleviate the financial crisis plaguing the enclave.

The humanitarian situation in the Gaza Strip had been worsening progressively since Hamas initially rejected the third payment of a Qatari grant in January, citing Israel's failure to abide by a truce sponsored by the United Nations, Egypt and Qatar.

Hamas refused the grant Jan. 24 after Israel introduced new conditions to the truce agreement, a deal that had allowed for the grant. Most notable among the proposed changes was a demand that Palestinians cease their weekly return marches — protests along the Israeli border that kicked off in March 2018.

Because of the new strings attached, Hamas declined the grant for its intended use, which was to pay the salaries of Gaza’s 27,000 civil servants. Egypt was also influential in Hamas' rejection of the money. Egypt had agreed with Qatar and the United Nations to allow the first two Qatari grants in November and December. But Cairo disliked that Qatar’s influence in Gaza was growing, and Hamas didn't want to lose Egypt's support.

Instead, Hamas and Cairo agreed Jan. 26 that the $15 million grant could be distributed among poor families in Gaza: Some 50,000 families will benefit from $100 monthly, and some of the money will go to humanitarian projects to help 5,000 Palestinians who were wounded during the return marches. The grant also is funding economic, social and health projects.

Soon after that agreement was reached, a flurry of meetings took place. On Jan. 31, an Egyptian security delegation met with Hamas leadership in Gaza to discuss a de-escalation with Israel. Nikolay Mladenov, UN special coordinator for the Middle East peace process, arrived Feb. 1 in Gaza and met with Hamas leaders to work on negotiating such an arrangement.

Also on Feb. 1, Hamas senior political leader Ismail Haniyeh revealed he had taken part in a trilateral meeting with Egyptian and UN delegations in his office in Gaza City, in an unprecedented step. According to Haniyeh, the meeting signaled that the situation in Gaza is at a very delicate stage and is nearing a crossroads.

On Feb. 5, Haaretz reporter Yaniv Kubovich revealed that Hamas leader Yahya Sinwar had laid down three scenarios concerning the future of the Gaza Strip. The story said Sinwar spoke to undisclosed international entities, which were to relay the options to Israel. The scenarios discussed were to either have Palestinian President Mahmoud Abbas take charge of Gaza, an unfeasible outcome at the moment; put Gaza under the control of the UN and Egypt; or prepare for a military confrontation between Hamas and Israel.

However, Palestinian media outlets reported that Egyptian intelligence met Feb. 6 with Hamas leadership and refused to put the Gaza Strip under UN management.

Sinwar did not comment on the Haaretz report. Al-Monitor tried to contact his office to no avail, as Sinwar rarely makes statements to the media. However, Hamas did not deny the report.

Hamas spokesman Hazem Qassem told Al-Monitor, “Hamas is unwilling to accept that the humanitarian crisis in Gaza goes any further because of the Israeli blockade and the sanctions imposed by the PA." He said Hamas is also unwilling to stop the border protests. “The return marches are a tool to break the blockade," Qassem added.

As well, any plan proposed to resolve the humanitarian crisis must be "part of a national consensus and must not result in a collapse in Gaza or create a power gap," he said, adding, "Egypt has a role in alleviating the blockade, and we are constantly in contact with the Egyptian side. The blockade continuing is not in the service of Gaza’s stability."

The three alternatives reportedly proposed by Hamas have sparked various responses. The Palestinian National Authority's (PNA) official news agency WAFA in Ramallah, the West Bank, published a release Feb. 9 depicting the options as “regrettable ones that mark a setback and a misstep for the movement’s positions.”

The proposals, the PNA said, are more than hypothetical; they are potential roadmaps that are being arranged and diligently worked on by regional and global players that it did not name.

Abdullah Abdullah, head of the Political Affairs Committee of the Palestinian Legislative Council (PLC), told Al-Monitor, “Hamas’ scenarios reflect a crisis for the movement in Gaza. Those scenarios are also a gambit by Hamas to attain some sort of advantage ahead of Israel, the PA and Egypt.”

Abdullah, who is also a member of the Revolutionary Council of Hamas rival Fatah, continued, “Those scenarios mean that Hamas’ decision is no longer a national one, but rather is influenced by some regional countries and [Egyptian nemesis] the Muslim Brotherhood, which impose on Hamas decisions that conflict with the Palestinian interest."

Omar Shaaban, director of the Gaza-based think tank Pal-Think, believes that “Hamas’ scenarios are emblematic of a new crisis facing the movement."

He added, “The scenarios are signs that Hamas is looking for solutions to its crushing crisis in Gaza. But war is not an option because it [won't] bring about solutions to the problems facing Gaza. On the contrary, a war would multiply the burdens and suffering in the Strip.”

Analyzing the scenarios shows that each one comes with a difficult set of challenges. The PA will not go back to Gaza if Hamas is unwilling to surrender its weapons, as per a formula for enabling the consensus government’s role in the Gaza Strip. Conversely, Egypt and the UN seem disinterested in taking control of Gaza without an understanding with the PA, which has international legitimacy.

And last, Palestinians know Hamas chose a path of war three times between 2008 and 2014 and never succeeded in lifting or even easing the blockade on the Gaza Strip.

Yahya Mousa, head of the PLC’s Oversight Committee and deputy head of Hamas' parliamentary bloc, told Al-Monitor, “While Israel is relaxed, the Palestinian collective is suffering a crisis. These scenarios are not the only options available, as a national consensus and a reconciliation remain a possibility.”

He added, “Hamas and the other factions have an obligation to research options that would pull us out of this turmoil that the national Palestinian project is going through and to not passively accept [the status quo]. This can be achieved by widening the circle of choices rather than limiting ourselves to those scenarios.”

On Feb. 8, Eddie Cohen, a researcher at Israel's Begin-Sadat Center for Strategic Studies of Bar-Ilan University and a former Israeli intelligence officer, said in an article on the center’s website that the best solution for Gaza is for it to be declared an “international quarantine zone." Hamas should use only the Rafah border crossing with Egypt for the delivery of goods, food and medication supplies, as a prelude to ending the Gaza Strip's dependence on Israel, he said.

Israel should end any ties with Hamas and turn Gaza matters over to the UN and Arab League, "which, through Egypt and with the funding of the Arab oil states, would be responsible for the welfare of the residents of Gaza as well as the return of the PA and the end of Hamas rule in the Gaza Strip," Cohen added.

Israel would want to win US support for such changes to gain legitimacy in the eyes of the international community.

Mustafa al-Sawaf, a former editor-in-chief of the Felesteen newspaper, told Al-Monitor, “Sinwar’s scenarios do not reflect a crisis, but rather a gambit. … [He] aims to send a message to Israel that an eruption of the situation in Gaza is imminent." Sinwar had warned in December about the impending blowup of the situation in Gaza should the siege continue, "and it will not only reach Israel but might even have regional fallout,” Sawaf said.

Gaza's humanitarian situation has grown dire in light of a shortage of fuel needed to operate plants that power hospitals and water and sanitation networks. Adding to that burden are power cuts, an unemployment rate of 54.9% and a poverty rate exceeding 80%, according to data issued Jan. 17 by the Palestinian General Federation of Trade Unions.