Turkey may be planning an ambitious air-naval military drill that would span three seas. 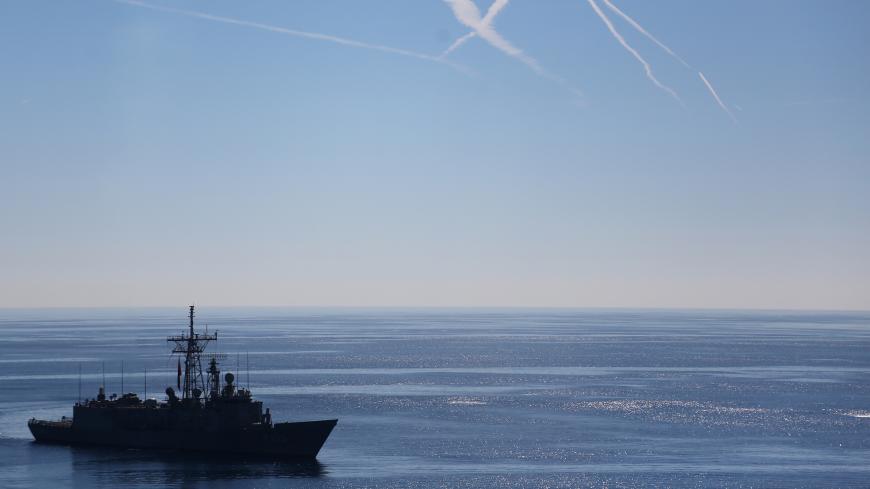 Military and political circles in Ankara say Turkey's navy and air force are planning their largest naval exercise of the past 20 years in early March in the Aegean, eastern Mediterranean and Black seas. According to media reports, the exercise codenamed Blue Homeland will be held between Feb. 27 and March 3 in an area of 462,000 square kilometers (nearly 134,700 square nautical miles).

Turkish media say the exercise is actually a message to the Eastern Mediterranean Gas Forum (EMGF), a coalition formed recently by Egypt, Israel, Cyprus, Greece, Italy, Jordan and the Palestinian Authority. The alliance plans to explore energy sources in the eastern Mediterranean Sea, including disputed areas.

Despite the media reports, so far sources in Ankara haven't confirmed to Al-Monitor that a final decision has been made on the exercise.

Looking at the current regional posture of the Turkish navy, such a massive exercise doesn’t seem very likely. But a security source told Al-Monitor that the navy’s smaller elements could stage smaller-level firing exercises simultaneously in the eastern Mediterranean, Aegean and Black seas at the end of February because Ankara feels a more military robust posture is needed in these naval zones.

Naval expert and writer Cem Devrim Yaylali told Al-Monitor that the regular exercises by Turkey's navy are usually held in April and May. He also spoke about a major exercise the navy had held in June 1998, saying, “In the Sea Wolf exercise of that year, Turkish naval elements spread over the Mediterranean. One group deployed east of Malta and the other west of Crete before launching a virtual battle with the participation of the Turkish air force. That was the largest exercise ever held by the Turkish navy in the Mediterranean, and was meant as a response to the tension with Greece.”

In December 2018 construction began on a naval base at Trabzon on the Black Sea coast. That base will be the navy's ninth. Turkey currently has naval bases at Mersin and Iskenderun on the Mediterranean Sea, Aksaz and Foca on the Aegean Sea, Golcuk on the Sea of Marmara, Eregli on the Black Sea, and at Istanbul and Canakkale on the Bosporus and Dardanelles straits.

It's important to note that Ankara's move comes after news reports in early December that the United States might send ships to the Black Sea following the Kerch Strait incident between Russia and Ukraine.

The Turkish navy, in addition to reconnaissance and patrolling tasks, maintains close cooperation with NATO countries and other states on the Black Sea coast.

It will be interesting to see how Moscow reacts to the new Turkish naval base.

Retired navy Col. Abdullah Kokturk said it's actually the United States that wants the Trabzon naval base and added, “If you really want to establish a naval base in the eastern Black Sea there must be the existence of a threat in that region. Turkey's relations with Georgia, which is one of the nearest countries, in that region are very good. All that remains is Russia. But there seems to be no problem with Russia. When it comes to the S-400 missile contract and to issues such as Syria, Turkey-Russia relations look good. It's known that the United States has wanted a NATO base in the Black Sea for a long time. The United States needs a military base in Trabzon to dominate the Caucasus and Central Asia, to transfer the wealth of this region to the West, to inactivate Turkey, to isolate Iran."

If, as Kokturk claims, Turkey becomes a host to NATO navies led by the United States, that will definitely agitate Moscow.

Andrei Boldyrev, a senior Turkey researcher at the Center for Middle East Studies, told Sputnik News, “Turkey continues to reinforce its positions in the Mediterranean and the Black Sea regions. In August, it decided to build a base in northern Cyprus. Therefore, the base in the Trabzon area is a logical extension of this policy."

He added, "Perhaps this was accelerated by NATO's decision to hold a military demonstration in response to the Kerch incident. Turkey was faced with this fact, and the base in the Trabzon area is the answer in the sense that Ankara is strengthening its presence in the Black Sea in the face of the threat of escalation. … It's possible that Ankara decided to take advantage of the situation in the Black Sea region and create an additional foothold."

Another development that would surely frustrate Moscow is Ukrainian President Petro Poroshenko’s recent announcement. On Jan. 12, he declared he had signed an agreement with weapons manufacturer Baykar Makina, owned by the family of Turkish President Recep Tayyip Erdogan’s son-in-law Selcuk Bayraktar, and Ukraine's Ukrspetsproject Ltd. to buy 12 Turkish Bayraktar Tactical Block 2 (TB2) drones for the Ukrainian army. In the first batch, six TB2s are set to be delivered in a year.

"These newest attack drones will aid the army on operational and tactical levels, and besides having high-tech characteristics, can be equipped with additional modern high-accuracy missile systems to destroy armored units or marine targets with fortified positions," Poroshenko added.

According to experts, the deal is worth around $80 million.

It's obvious Ankara is shifting to a regional naval deployment that will link the eastern Mediterranean, Aegean and Black seas. Turkey, with Russia's cooperation, intends to overcome the EMGF coalition and cope with the pressure it faces in the Black Sea with US and NATO cooperation.