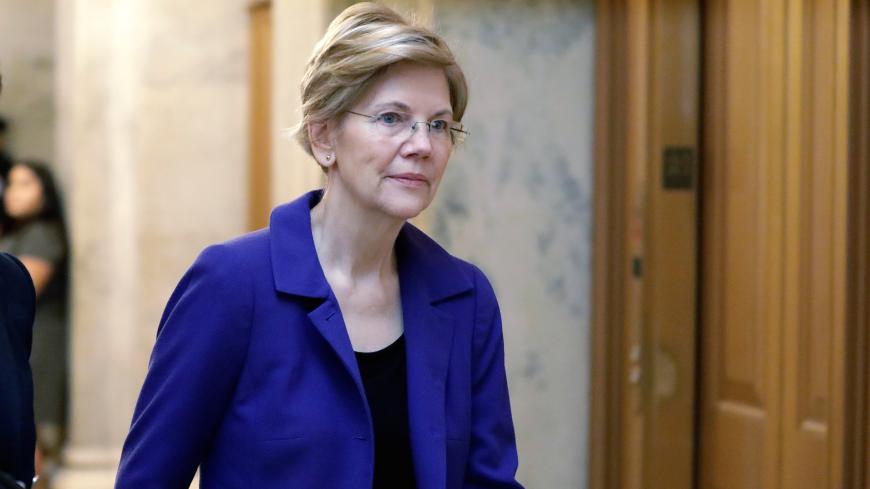 US Senator Elizabeth Warren (D-MA) arrives for a procedural vote on the confirmation of US Supreme Court nominee Brett Kavanaugh on Capitol Hill in Washington, US, Oct. 5, 2018. - REUTERS/Yuri Gripas

President Donald Trump’s surprise announcement last month that he’s withdrawing US troops from Syria was met with a strong bipartisan rebuke from Congress. But several notable Democrats were silent — including those with presidential aspirations. Sen. Elizabeth Warren, D-Mass., the first Democrat to formally take steps to run against Trump in 2020, became the first presidential aspirant to address Syria on Wednesday. And she partially agrees with him on the military withdrawal.

“I think it is right to get our troops out of Syria,” Warren said in an interview on MSNBC as she simultaneously endorsed a US withdrawal from Afghanistan. “Everybody who kept saying ‘no, no, no, you can’t do that’ in the defense establishment needs to explain what they think winning in those wars looks like and where the metrics are.”

Why it matters: Warren’s remarks echo Trump’s defense of his Syria withdrawal. They also illustrate a dilemma for Democrats hoping to woo the party's progressive base, which views US military intervention with skepticism despite disdain for the president.

“The idea that the way we’re going to do that is just to continue to keep troops and more troops forever and ever in that part of the world, it’s not working,” said Warren, who sits on the Armed Services Committee.

Allies wanted: But the Massachusetts Democrat also took pains to ensure that she implicitly rebuked the commander-in-chief.

“When you withdraw, you’ve got to withdraw as part of a plan,” Warren said. “You’ve got to know what you’re trying to accomplish throughout the Middle East and that piece needs to be coordinated … We actually need to plan this out and talk about with our allies how we ensure more safety and stability in the region.”

The fate of America’s Kurdish allies in Syria in particular is an open question once US troops leave for good. The United States has backed the Kurdish People’s Protection Units (YPG) against the Islamic State, which still maintains a small presence in eastern Syria. The support prompted Turkey, which deems the YPG a terrorist group, to threaten an offensive. Following Trump’s announcement, the Kurds have appealed to the Syrian regime, Russia and France to shield it from Ankara’s wrath.

"We want to protect the Kurds," Trump said on Wednesday. "But I don't want to be in Syria forever. It's sand, and it's death."

What’s next: For now, Warren remains the only potential Democratic challenger to address Trump’s latest shift on Syria. It remains to be seen how other progressives and more centrist challengers tackle the issue. Trump has also backed down on his initial 30-day deadline for withdrawal, simply stating on Wednesday that it would happen “over a period of time.”

Know more: Read Diplomatic Correspondent Laura Rozen for the latest on Trump’s walkback of the withdrawal timeline. And be sure to read Pentagon Correspondent Jack Detsch’s deep dive into how the US-led coalition intends to finish the campaign against the Islamic State without troops in Syria.