A top Syrian Kurdish official said today that US-backed fighters will consider integrating with the Syrian army, a potential frustration to US policy in the country after troops withdraw. 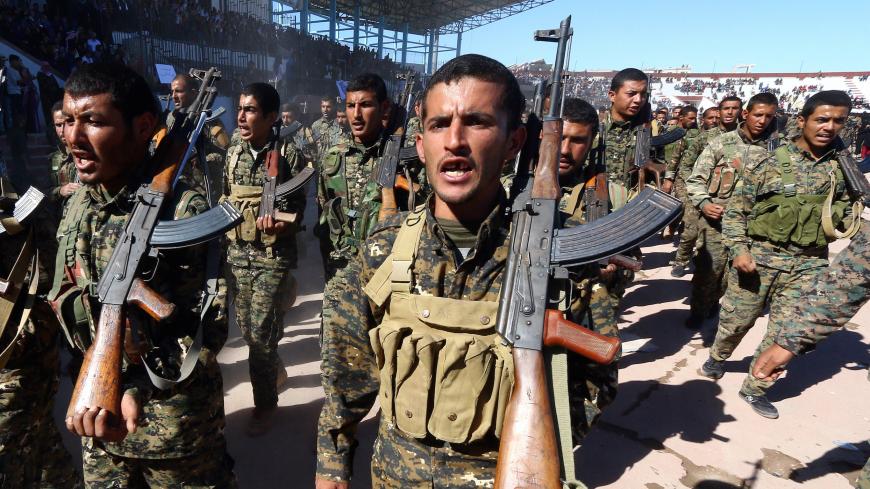 Ahmed, who leads the executive council of the SDC, the political wing of the US-backed Syrian Democratic Forces, said the Donald Trump administration had not objected to Syrian Kurds opening up negotiations with Damascus.

“They did not object clearly. They always tell us this is a Syrian affair,” she said. “But they urged us, when you negotiate, you should come from a strong position.”

Even as the United States appears to have slowed down its pullout from Syria, a turn by Kurdish forces toward Damascus could frustrate the Pentagon’s plans to stabilize former Islamic State-held areas.

Speaking to reporters today, acting Defense Secretary Patrick Shanahan indicated that the Pentagon is still on track with plans to integrate US-supported Kurdish forces into towns and cities along the Middle Euphrates River Valley, the one-time heart of the Islamic State caliphate, even as the United States proceeds with a “deliberate, coordinated, disciplined withdrawal.”

"How do you sustain local security?” Shanahan said. “That’s where these partnerships are so critical."

Shanahan said the Islamic State had lost 99.5% of its former caliphate in Syria. But Director of National Intelligence Dan Coats said the group still commands "thousands of fighters" in Iraq and Syria in a report released today.

A US official told Al-Monitor that the withdrawal is conditions-based, and US-led airstrikes will continue, giving the coalition some wiggle room to deny the return of Islamic State fighters, even as American ships have already moved into the region to withdraw troops.

The Wall Street Journal reported earlier this month that the USS Kearsarge, an amphibious assault ship, will head to the region to provide backup to American forces as they depart Syria.

Shanahan is not slated to meet with the visiting Syrian Kurdish delegation, according to a senior defense official. At the Pentagon briefing, his first formal press conference since assuming the acting role, he did not elaborate on any possible US plans to protect the Kurds. Ahmed said the trip to meet US officials will be centered on getting clarity from the Donald Trump administration on the US withdrawal timeline.

Ahmed’s trip made a splash Monday night when her delegation ran into President Trump at Trump International Hotel, where he was dining with members of the administration and Congress.

The commander-in-chief raised the possibility of a safe zone to protect Syrian Kurds in their brief encounter, according to the Kurdish leader.

“Of course we’re asking the US government for alternative plans, to slow the withdrawal,” Ahmed said today. “What we are asking is to keep the safety and stability of the area.” She said there was no agreement with the Pentagon to return weapons handed over to the Syrian Democratic Forces during the campaign against the Islamic State, although defense officials once said that was a condition of US armed support.

But it’s not clear that Ahmed’s message is being heard in Washington. A source familiar with her plans said Ahmed hopes to meet with officials from the Pentagon and State Department, as well as members of Congress, but did not provide further details.

Ahmed met with Sen. Chris Van Hollen, D-Md., earlier this week, according to a spokesman for her group. Meanwhile, Sen. John Kennedy, R-La., has offered an amendment to a pending Middle East legislative package that would authorize Trump to use force to protect the Syrian Kurds.

Back in Syria, she said, there are no signs that Assad will accept any form of Kurdish self-governance in Syria or changes to the constitution.

“We are not at the negotiating table,” she said. “We are excluded.”