As US exits Syria, what will define Moscow's Mideast policy in 2019?

The US exit from Syria means the set of challenges facing Moscow in the region is significantly changing. 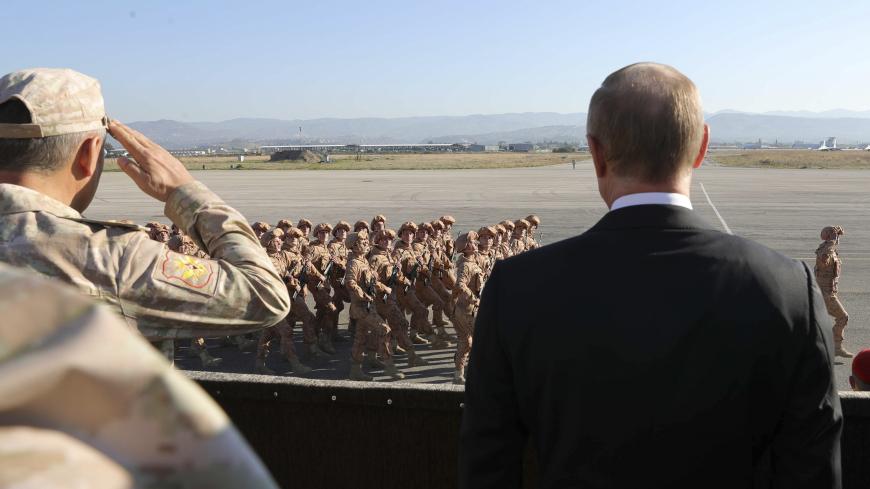 MOSCOW — Although a shift in Russia's Mideast policy had been in the works prior to US President Donald Trump's surprise December announcement of a Syria withdrawal, the US exit will impact the changes facing Moscow in the war-torn country.

The US-led coalition in Syria began its withdrawal Jan. 11. Pentagon spokesman Col. Sean Ryan said that "the process of our deliberate withdrawal from Syria" had begun, while noting that "specific timelines, locations or troops movements" will not be disclosed "out of concern for operational security." Although initial reports claimed that some American forces had already withdrawn from the Rmeilan military base in Hasakeh province in northeastern Syria, Defense Department officials later clarified that the withdrawal of equipment — but not troops — had begun.

The situation in Syria in the post-US era dominated the discussion, but the officials also reportedly “exchanged views” on developments in Iraq, Libya, Sudan and Yemen, endorsing efforts by the UN special envoy to Yemen Martin Griffiths to resolve the crisis.

The snap American decision to pull out from Syria created a lot of uncertainty for a few weeks, and Russia has been waiting to see how its implementation will occur.

"The situation regarding the US withdrawal from Syria will be affected by various factors," Russia's Deputy Foreign Minister Sergey Ryabkov said. "Supporters of preserving the US presence in Syria have strong positions in Washington … I can’t imagine the US physically, fully and undisputedly withdrawing from Syria militarily all of a sudden in the current situation of Washington’s unrestrained chase for global domination and the striving to be present everywhere and solve issues only on its terms."

Many in Moscow still believe that the US military, in some form — special forces, CIA operatives or military advisers — will remain in the area after the pullout to keep Iran in check at the Syrian-Iraqi border. Yet Trump's decision is perceived — and already politically dealt with — as a new reality on the ground. In this sense, despite the rhetoric, the differences within the administration between national security adviser John Bolton and Secretary of State Mike Pompeo over the withdrawal matter little to Moscow and most stakeholders in the Middle East, for they are now all calculating their future steps with a view that the US commitment itself is no longer there.

Diplomatically, it also doesn’t change Russia’s overall course of action that much. Moscow is inclined to pursue the initiatives it set forth in 2018, the three pillars being the launch of the constitutional committee; the return of refugees; and working toward the relegitimization of President Bashar al-Assad's government, coupled with the pursuit of funds to rebuild the country.

At the regional level, for the first set of objectives Russia will need the collaboration of the new UN envoy for Syria, Geir Pedersen, as well as an increase in contacts with the interested and adequate opposition groups and local councils. For the second it would seek a more fruitful cooperation with countries that hosted the most refugees: Turkey, Jordan and Lebanon. For the third — funding — the likely go-tos are Gulf monarchies.

Outside the region, France, Germany and possibly Italy, as well as the EU as a political actor, are seen as having their own stake in each of the baskets and thus expected to come on board. A possible lack of progress in the work with Europeans on any or all of these tracks is too unlikely to avert Russia from the stated course. Moscow is leading the process and will do so with or without Paris, Berlin and Brussels.

Ongoing talks with Iran and Turkey over “American succession” in Syria show the Astana format is still the best venue for the three to discuss their own internal disagreements and push forward their respective agendas. There are plenty of ways in which the “love triangle of necessity” — Moscow, Ankara and Tehran — can become more polarized throughout the year, but both Turkey and Iran will remain critical partners for Russia in Syria and well beyond, and Moscow will work hard to ensure the disagreements are smoothed out in mutually accepted ways.

Two major strategic trends have evolved in 2018 that will define Russia’s policy pattern for the region.

First, when Moscow entered the Syrian scene, the three primary goals it set for itself had to do with propping up the Assad government, defeating groups it deemed terroristic and breaking through what by then was shaping up as the Western isolation of Russia. The Russian approach was arguably threats-based. More than three years into the Syria campaign, Assad looks rather stable — perhaps even too much to the point of Moscow’s occasional irritation. No single terrorist group represents a vital security challenge to either Syria or Russia, and the dynamism of Russia’s bilateral activity with regional actors, not to mention the outreach by many Western states to Moscow, make the “isolation” argument irrelevant.

Though the fluidity of modern international relations indicates things may change rather quickly, especially if an Islamic State 2.0 emerges in a few years, for now Russia feels ready to transform its Middle East policy from the “threats-based” approach to the “opportunities-based” one. Its image of the new power broker in the region that effectively offers both off-shore balancing and hedging opportunities enables Moscow to explore an array of venues across the region — be it in the security management domain, or the fields of energy, arms sales or agricultural exports.

Second, since its early stages, the conflict in Syria has been evolving on three levels: internationally, regionally and locally.

The international dimension of the conflict manifested in the form of Moscow laying claim to the global power status and Washington seeking to deny it. With the United States abandoning the scene, the “great power” dimension will continue in other domains and regions, but Syria now seems a lost case: Russia lost out on the much sought-after cooperation with the United States, while Washington lost out on defeating Russian ambition for a global power projection.

The regional level, however, is where the tug of war has never ceased. In fact, in many respects it will intensify now that there’s significantly less appetite for outside — namely, Western — restraint on what regional stakeholders do. The focus on Iran doesn’t effectively deter the leadership in Tehran from pursuing its goals either.

The local-level dynamics have been mixed. Although there’s still plenty of opposition to Assad's rule in Syria — and, equally, enough support for him to stay in power — the very internal dynamics to this dimension is not near what it was. Yet should the regional-level animosity reach new heights, the use of local players as proxies may re-energize with the new drive, making various radical terrorist groups ultimate beneficiaries.

The situation pushes Moscow to cautiously invest its political capital in the conflicts that are important to the region to further solidify its role and respective image. It is raising its voice on the status of the conflict in Yemen, has been sitting on multiple chairs in Libya, taking up the effort for the intra-Palestinian engagement and, most importantly, offering working ideas on the modus operandi for the region’s most uncompromised rivalries.

The Middle East turf, however, is a casino-style gamble. Once you start feeling you are having a lucky streak you are in a risk zone to be gradually losing all of your gains. To continue to make the most of the opportunities Moscow created for itself, it would be wise to stay prudent and not get dizzy with success. The pullout of the US troops is the first test in this respect.