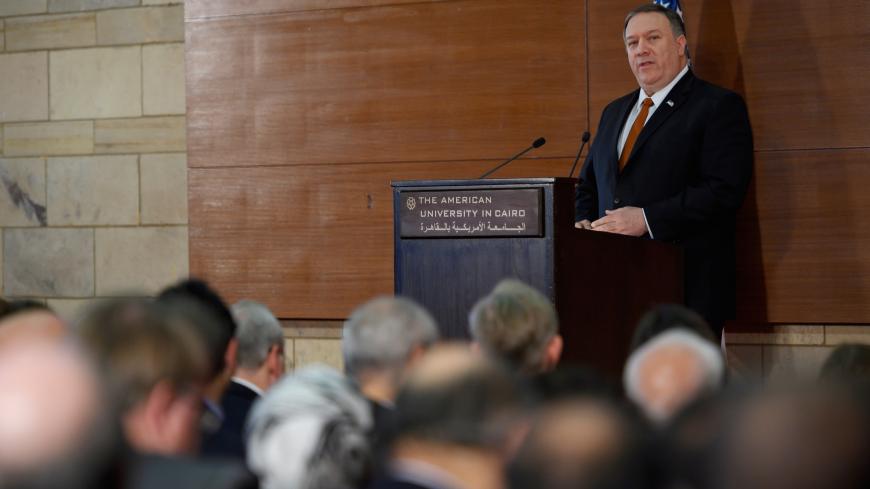 US Secretary of State Mike Pompeo speaks to students at the American University in Cairo, Egypt, Jan. 10, 2019. - REUTERS/Andrew Caballero-Reynolds

WASHINGTON — Secretary of State Mike Pompeo’s stridently partisan speech in Cairo today chiding the former Barack Obama administration for its Iran nuclear diplomacy and attempts to engage the people of the Middle East received a withering response from former US diplomats and regional experts, who called it unstatesmanlike and tone-deaf.

“In falsely seeing ourselves as a force for what ails the Middle East, we were timid in asserting ourselves when the times — and our partners — demanded it,” Pompeo said in the speech, titled "A Force for Good: America Reinvigorated in the Middle East," at the American University in Cairo.

“Our desire for peace at any cost led us to strike a deal with Iran, our common enemy,” Pompeo said in another swipe at the Obama administration. “The good news is this: The age of self-inflicted American shame is over, and so are the policies that produced so much needless suffering.”

Current and former diplomats were, in a word, not impressed.

Pompeo’s speech “was a regurgitation of what they have been saying for two years. There was nothing new, and it was offensive,” former career US diplomat and ambassador to Yemen Gerald Feierstein told Al-Monitor. “That they think that anyone still wants to hear about Barack Obama’s 2009 Cairo speech — get over it.”

“You own the issue now, you own the policy,” Feierstein continued. “People want to know what you are going to do, not what you think Barack Obama did wrong. And on that score, there was nothing there, Just a lot of empty rhetoric of all things they are going to do and how wonderful the United States is and it never occupied anybody. So what.”

Pompeo’s speech is unlikely to reassure American allies and partners frustrated by constantly shifting Donald Trump administration positions on the region that they are not properly consulted about, said former FBI and Treasury Department official Matthew Levitt.

“I do not think they [the Trump administration] fully appreciate the level of anxiety among our allies and potential allies in the region and beyond in Europe in terms of how reliable we are as a partner,” Levitt, now with the Washington Institute for Near East Policy, told Al-Monitor.

“It is not just the decision to withdraw US forces in Syria,” Levitt continued. “Much more than that, it is the way the decision was arrived at and announced. [US Syria envoy Jim] Jeffrey said one thing one day, Trump says the opposite the next day. … People can’t keep up with the pace of the back and forth, ping pong. The lack of clarity, the lack of procedure in the policy making process — the allies see that.”

“While it is great to go to the region in a time of anxiety to reassure people you mean to have a reinvigorated role in the Middle East, it is not enough to say it,” Levitt said.

The extensive swipes in the speech at the previous administration were also discomfiting, Levitt said.

Whether it is done by Republicans or Democrats, “I always felt uncomfortable when Americans travel abroad and hang out dirty laundry,” he said.

“Embarrassing and shameful speech by the small, hyper-partisan Trump suck-up Pompeo,” Ellen Tauscher, a former undersecretary of state for arms control in the Obama administration and a former member of Congress, wrote on Twitter. “There’s not a ‘non-partisan statesman’ pore in his body.”

“Seriously. A joke. They really are struggling along with the C team only two years in,” a former US diplomat, speaking not for attribution, told Al-Monitor of Pompeo’s speech. “Honestly, it'll be forgotten in about five minutes."

Feierstein was among several observers who noted that Pompeo also got a big fact wrong in the speech, when he said who would have ever thought that an Israeli prime minister would visit Oman. In fact, two other Israeli prime ministers had visited Oman before Benjamin Netanyahu’s trip to Oman last fall.

“Look, when I was in government, whether in Republican or Democratic administrations, …they would never have allowed a speech to go forward like that without fact-checking the hell out of it,” said Feierstein, now with the Middle East Institute. “That they let obvious wrong statements creep in is a reflection of how this administration does business and a reflection of the fact that they don’t have professionals writing this stuff.”

“This will be in the dustbin of history before tonight,” Feierstein added. “Because it’s absolutely empty.”

The audience at the American University in Cairo did not show much enthusiasm for the address.

“There was no applause during the speech, and at the end, it seemed to me, the response was pretty tepid,” Feierstein said. “I don’t think there was any real enthusiasm in the hall for what he said to say.”

Pompeo also seemed unaware that the Egyptian audience is not particularly interested in being part of an alliance against Iran. Finally, Pompeo’s speech showed minimal desire to engage with the people of the Middle East versus their autocratic leaders, Feierstein said.

“Whether you agree or disagree with Obama, and there were lots of things I disagreed with … at least they [the Obama administration] were trying to think through the issue of how to engage the broader population and not just speak to the Sisis and Erdogans and Mohammed bin Salmans. And this speech is totally lacking, completely tone-deaf to the general population. … It completely denies agency to the people of the region.”

“Our eagerness to address only Muslims and not nations ignored the rich diversity of the Middle East and frayed old bonds,” Pompeo said in apparent reference to working with the Gulf Arab autocrats determined to suppress any political dissent at home. “It undermined the concept of the nation-state, the building block of international stability.”

“Double down on supporting a host of despotic regimes, blame all regional ills on Iran, turn back on democratic aspirations of people across the region,” said Sina Toosi, a research associate at the National Iranian American Council, in providing his summary of Pompeo's speech on Twitter.

“What's clear is that was not a speech for Egyptians, or those in the Middle East, but for a home audience,” Josie Ensor, the UK Telegraph’s Beirut-based Middle East correspondent, said on Twitter. “His boss would have been happy.”

The foreign minister of Iran — the main target of the speech’s ire — predictably ridiculed its main theme that American interventions in the Middle East are a force for good.

“Best for the US to just get over loss of Iran,” Zarif added.