Intel: Why Iran is shrugging off Pompeo’s speech 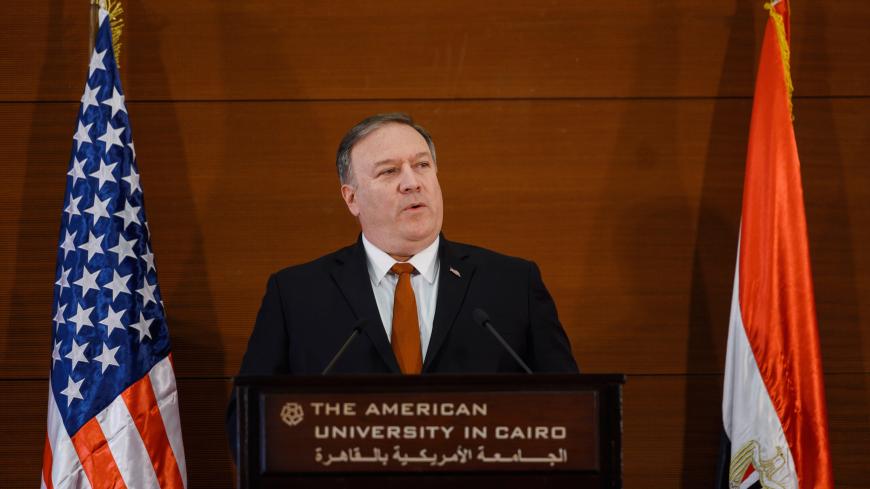 US Secretary of State Mike Pompeo speaks to students at the American University in Cairo, Egypt, Jan. 10, 2019. - REUTERS/Andrew Caballero-Reynolds

Iran has reacted to US Secretary of State Mike Pompeo’s speech in Cairo with both ridicule and disdain, with Supreme Leader Ayatollah Ali Khamenei warning against taking seriously anything coming out of the Donald Trump administration — whether threats or promises.

Why it matters: In explaining his perception of the Middle East, US Secretary of State Mike Pompeo portrayed Iran as the root of all evil, promising intensified punishment for the Islamic Republic until it abandons its nuclear and missile programs as well as its present foreign policy priorities. Pompeo stated, "America's economic sanctions against the Iranian regime are the strongest in history and will keep getting tougher. Until Iran starts behaving like a normal country, the 12 demands that we stated in May will remain in force because the threat to the region endures."

Iranian Foreign Minister Mohammad Javad Zarif promptly took to Twitter to denounce Pompeo’s speech, writing shortly afterward that “the day Iran mimics US clients & @SecPompeo’s ‘human rights models ’ — be it the shah or current butchers — to become a ‘normal’ country is the day hell freezes over.” He added, “Best for the US to just get over loss of Iran,” referring to the fall of the US-backed shah in 1979. Zarif’s reaction was preceded by comments by Supreme Leader Ayatollah Ali Khamenei on Wednesday. “Some US officials are like clowns. … Such people’s threats, promises, and signatures are not reliable; you should mistrust them.”

What’s next: Pompeo told reporters during his visit to Jordan on Tuesday that the United States will “in the coming days and weeks” double down “not only our diplomatic but our commercial efforts to put real pressure on Iran to achieve what it is we set out for them back in May" — referring to the 12 demands of Iran he outlined shortly after President Trump exited the 2015 nuclear deal.

These comments indicate that the United States is likely planning more sanctions on Iran and also upping its pressure on Europe not to offer the Islamic Republic any breathing space. Of note, the European Union has for months been stalling the unveiling of its promised Special Purpose Vehicle (SPV), which is meant to facilitate legitimate trade with Iran. But these continued delays are causing irritation in Tehran, which is stuck between not giving in to Washington’s provocations to ditch the accord while on the other hand not giving the Europeans the impression that it will stick with the nuclear deal no matter what. Against this backdrop, Iranian national security adviser Ali Shamkhani on Monday notably became the first senior official in Tehran to publicly state that Europe’s “opportunity” to live up to its commitments under the nuclear deal has “ended.”

Know more: Be sure to read Al-Monitor Iran Pulse Editor Mohammad Ali Shabani’s analytical coverage of Shamkhani’s comments and what is likely to come next. For more on Iranian reactions to Europe’s unveiling of new sanctions over Iran’s alleged assassination plots amid further delays on the SPV, see our media review from Wednesday. And with more US sanctions likely ahead, make sure to check out our coverage of the latest anti-Iran hawk to join the Trump administration.