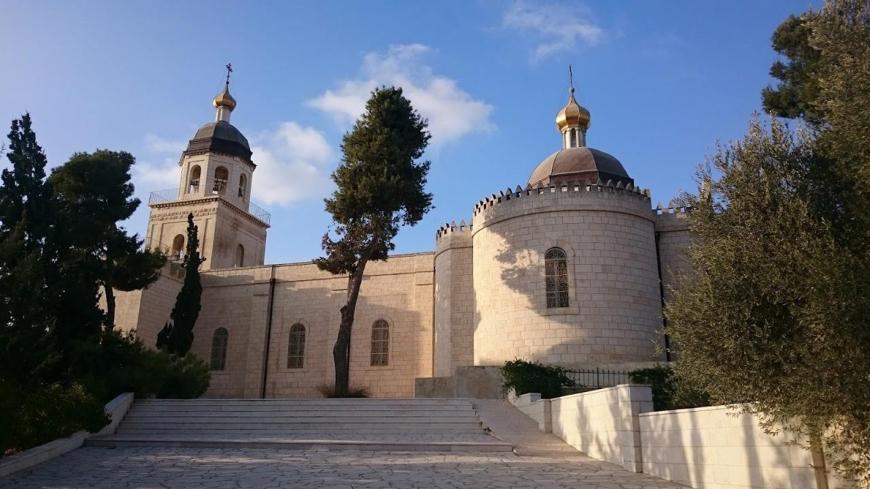 The Russian Orthodox Monastery of the Holy Trinity and Holy Forefathers Church is seen in Hebron, West Bank, in this image posted Feb. 25, 2018. - Facebook/lamarguesthouse

RAMALLAH, West Bank — The Russian Orthodox Monastery of the Holy Trinity and Holy Forefathers Church in Hebron was once a lively venue for pilgrims in the late 20th century, but it will have a quiet Orthodox Christmas Eve on Jan. 6. A few Russian women who live in Hebron will come in to offer the season’s greetings to the resident clergy, who will then go to the Greek Orthodox Church of Bethlehem for the occasion.

Located just west of the city center, the large, crucifix-shaped building is the only Christian site in this Palestinian city located in the southern West Bank. Its golden domes, frescoes and gold-painted icons display classical Eastern Orthodox architectural style, but Islamic influence is evident in the oriental motifs and arched windows.

The monastery was built in the second half of the 19th century at the site of a historic oak tree. According to the Bible, the site is where God and three angels appeared to Abraham and announced that his wife Sarah would become pregnant. The tree is known as the Oak of Mamre or Oak of Abraham.

Badr Zablah, a monastery guard, told Al-Monitor that the Russian Orthodox clergy had originally tried to buy the land around the tree but only Muslims were allowed to buy land under Ottoman law. Consequently, Archimandrite Antonin, the influential head of the Russian Ecclesiastical Mission in Jerusalem during the 1860s, signed a hundred-year lease and gradually rented more land around the site and built the tower next to it now known as Al-Tantura, Arabic for "peak." Then came the monastery and eventually the Holy Forefathers Church was built in 1906. The locals called the complex al-Maskubiyyah — “Muskovite” in Arabic — in reference to the Russian Orthodox clergy who lived in the monastery.

According to Zablah, the complex also contains the remains of an olive press from the Canaanite period. Some say that its construction dates back 4,500 years. The area is surrounded by vineyards and olive, fig, oak and almond trees, which have turned the place into an attractive spot for visitors.

Though the services are now rare, the church serves as a meeting place for a handful of Russians in the city, especially Russian women married to Palestinians. The number of resident Orthodox clergy varies from three to five, and the church occasionally receives Orthodox delegations from outside Palestine, especially on holidays.

Zablah recalled more festive times for the church and the monastery when large Russian Orthodox delegations and Orthodox from all over Palestine would visit on the Orthodox Christmas day, which falls on Jan. 7. The clergy also enjoyed strong ties with the local community.

“There was respect and good-neighborliness between Muslims and the Orthodox clergy — but recently, the relationships are formal and minimal,” he said.

Zablah said that the old generation of priests, who lived in the monastery for 60 years, mostly passed away in the early 2000s. "They knew most of the population and paid them visits during both Muslim and Christian religious and social events,” he said.

The monastery area has long been the subject of an ownership dispute. In early 2017, leaked documents suggested that the Palestinian Authority was seeking to transfer the land ownership of the complex to the Russian Ecclesiastical Mission in Jerusalem. The owners of the Tamim al-Dari Endowment displayed their land deeds, but the Ministry of Endowment made no comment on the issue. The press widely reported that the property had already been transferred to Russia discreetly, but the news is still unconfirmed.

Naaman Amro, a history professor at Al-Quds Open University, told Al-Monitor that the land is located within a private Islamic endowment, which means that the Islamic Endowments Ministry has no jurisdiction over it. The Ottoman state, he said, leased it to a Russian mission, as selling it to foreigners was forbidden under Ottoman rules.

“At the time, it was common for such missions to build churches in Palestine. Construction was only allowed in isolated areas located far from ​​the city center, and some of these lands belonged to the local Muslim population,” said Amro.