Egypt seeks to strengthen its religious influence in the city of Jerusalem through the properties and endowments of the Orthodox Church in Jerusalem, and also to preserve its ownership of the properties. 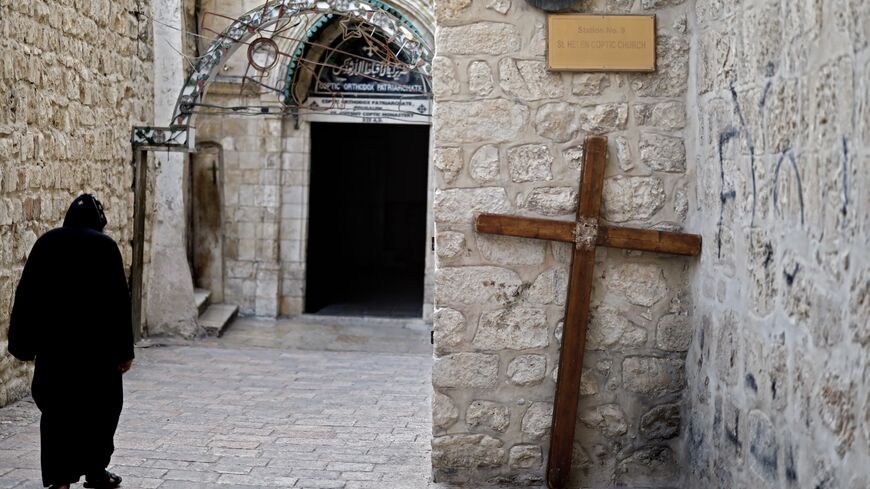 A Coptic Christian monk walks past a cross on the roof of the Church of the Holy Sepulchre toward the entrance of the Coptic Orthodox Patriarchate in Jerusalem's Old City on Oct. 20, 2018. - THOMAS COEX/AFP via Getty Images

Egypt is trying to gain influence in Jerusalem through the properties and endowments owned by the Egyptian Coptic Orthodox Church in Jerusalem.

“The Egyptian Orthodox Church is a national institution. Its ownership of endowments and monasteries in Jerusalem helps consolidate Egyptian influence when it comes to Jerusalem and the Palestinian cause,” he added.

Kamal Zakher, a Coptic journalist at Egypt's El-Watan News, told Al-Monitor, “The properties of the Egyptian Church and its presence in Jerusalem fall within the scope of Egyptian soft power, which helps the state spread its popular influence in Jerusalem.”

The Coptic Orthodox Church recently brought back to the forefront of its priorities the issue of preserving properties and endowments. This comes after Ethiopian monks attempted to place the Ethiopian flag on the grounds of the Monastery of the Sultan (Deir al-Sultan), located on the roof of the Chapel of St. Helena in Jerusalem, in April. The chapel is part of the Church of the Holy Sepulchre.

Deir al-Sultan's ownership is hotly disputed between the Egyptian and Ethiopian Ortodox churches, and the monastery has been essentially occupied by the Ethiopians.

The head of Egypt's Coptic Orthodox Church, Pope Tawadros II — in a May 11 meeting with church leaders, including Coptic Bishop Kamel Michel, who also is an Egyptian senator — discussed ways to preserve church properties in Jerusalem and to legalize the church’s ownership of Deir al-Sultan.

The state-owned Akhbar al-Youm newspaper had written a day earlier that Egypt has a large real estate wealth in Jerusalem that must be better managed by Egyptian authorities.

The newspaper said, “The Egyptian Orthodox Church owns several monasteries and buildings in Jerusalem, including Deir al-Sultan and two churches, namely the Church of the Angel [Michael] and the Chapel of the Four Living Creatures.” Both also are part of Deir al-Sultan.

The paper also pointed out, "These Egyptian properties are the subject of an ongoing legal dispute.” The Church of the Angel and the Chapel of the Four Living Creatures are also claimed by Ethiopia.

Also under dispute is a claim from a state-owned Egyptian bank that it owns stock in the King David Hotel in Jerusalem.

Tawadros visited Jerusalem in 2015 and held a mass in the Church of the Holy Sepulchre.

In February 2016, he called on the Coptic archbishop of Jerusalem, Anba Antonios, to preserve the church's property in the region. Pope Tawadros II said, “The Egyptian Church has many properties in the Palestinian lands that the new archbishop must preserve.”

In 2016, Antonios drew up an inventory of the properties and monasteries and documented their ownership through official documents and deeds.

In November 2018, the Coptic Church sent a delegation to Jerusalem to visit Deir al-Sultan and the church's properties as part of an effort to preserve its ownership rights.

Political scientist Tareq Fahmy told Al-Monitor, “The recent crisis of Deir al-Sultan in Jerusalem shed light on the properties and endowments of the church in Palestine, and pushed the state to show interest in this issue. The Egyptian church has counted its properties in Jerusalem and formed legal committees to collect all documents and deeds that help preserve its endowments. The Egyptian state must benefit from these properties.”

He said, “Egypt played a major role in the recent war in Gaza between Israel and the Palestinian factions [by brokering a cease-fire]. It proved its role contributes to the stability of the region. Egypt must use its religious influence in Palestine to emphasize that role.”

Bayadi told Al-Monitor that the Egyptian state must provide all means of legal and diplomatic support to the Egyptian church to preserve its properties and endowments in Jerusalem and Palestine.

The Egyptian legislator added, “The Egyptian church is one of the national institutions. Pope Tawadros II announced that the churches that exist outside the country are popular embassies for Egypt. The ecclesiastical properties in Jerusalem and Palestine are tantamount to Egyptian embassies that promote the Egyptian presence in the Holy Land.”