A recent run-in shines a spotlight on age-old disputes between Christian denominations in the Middle East. 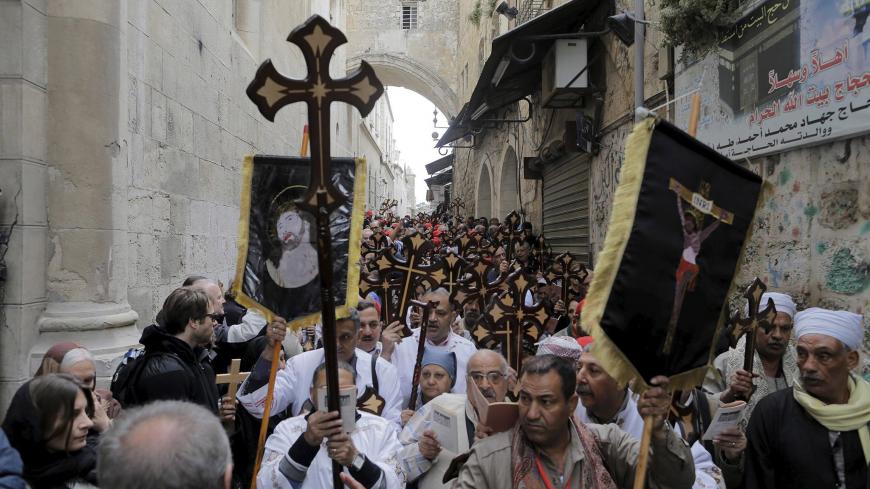 Egyptian Coptic Christian worshippers carry crosses during a procession along the Via Dolorosa on Good Friday during Holy Week, Jerusalem, April 10, 2015. - REUTERS/Ammar Awad

Ten days after Prime Minister Benjamin Netanyahu declared Israel the protector of Christians in the Middle East, Israeli security was filmed manhandling a Coptic Christian priest in Jerusalem and throwing him to the ground.

But on the morning of Oct. 24, the bishop and priests of the Coptic church in Jerusalem were demonstrating outside the entrance to Deir al-Sultan monastery, which is situated on the roof of Church of the Holy Sepulchre. The Copts were trying to keep Jerusalem municipal workers from bringing in supplies to repair the Christian holy site. Israeli officials say they fear the old chapel could be a hazard to worshipers and visitors, but a dispute over who should handle the monastery repairs has been going on for years.

Israeli security used force to remove the protesters. Two priests were arrested but were later released after the Egyptian Embassy in Tel Aviv intervened. The use of force by Israeli security was captured in video and photos, including images showing two members of the Israeli police pinning the Coptic priest to the ground. The images have gone viral, especially among Coptic communities around the world.

Some Coptic Christians have even circulated those images juxtaposed with images of Christ on the road to the cross. Egyptian parliament member Samir Ghattas made the comparison on ME TV by saying that Jews persecuted Jesus Christ and now Jews are persecuting Coptic priests.

Nashat Felmon, director of the Palestinian Bible Society and a member of the small Coptic community in Palestine, told Al-Monitor the community is very upset by the way Israeli security dealt with the issue.

“Our bishop and priests were holding a peaceful protest, and this is not the way to deal with religious leaders," he said.

Felmon, who was attending Mass in the Coptic church in Ramallah in the West Bank when he spoke with Al-Monitor, said the parish priest, the Rev. Isafanous al-Urashalimi, was absent as he was nursing injuries suffered in the confrontation.

Palestinian religious and political leaders held a protest Oct. 26 at the church in response to a call by church leaders in Ramallah. Islamic religious leaders, including the mufti of Jerusalem, Sheikh Muhammad Hussein, and PLO Secretary-General Saeb Erekat, made statements against the Israeli action.

Israeli security's intervention exacerbated what is primarily a dispute among Christians. The church has been a site of contention among Christian denominations for centuries. Many Christians believe the site to be Golgotha, also known as Calvary, the place where Christ was crucified, and numerous sects claim various parts of the church complex. The Oct. 24 disturbance was over the Deir al-Sultan monastery, which was built more than 1,000 years ago on the roof of the main building in the 19,000-square-foot complex. Two denominations claim authority over the monastery: Coptic Orthodox Christians, whose roots are in Egypt, and Ethiopian Orthodox Christians.

Bishop Anba Antonios, head of the Coptic Church in Jerusalem, reminded TV viewers Oct. 25 that the church possesses 23 documents — some ancient — proving its ownership. However, in 1970, Israelis broke what is known as the "status quo agreement," a pact designed to maintain a balance between secular and religious political parties. As the Copts were in the main church area celebrating Easter, Israelis changed the locks in the monastery and handed the keys over to the Ethiopians. At the time, Israel and Egypt were mortal enemies and involved in the War of Attrition.

A five-judge Israeli court had ruled in 1971 that the monastery in question belongs to the Copts and gave the Israeli government one year to resolve this issue — but almost 50 years later, the handover has yet to take place.

The bishop said the Coptic Church in Jerusalem has offered Israel several proposals to renovate the monastery, but Israel refused. He said the church sent the Israelis blueprints and agreed that Israeli municipal workers could do the repair "on the condition that we pay for it and supervise the repairs, but Israel again refused.”

Oddly enough, the key to the Church of the Holy Sepulchre itself has been held by a prominent Muslim family for centuries. Some say this was done to minimize future disputes among Christians. As that hasn't worked well, some also say it's time for Christians to solve their own interreligious differences.