In his latest interview, Hezbollah Secretary-General Hassan Nasrallah seemed to adopt a more measured tone toward Israel when compared with his previous speeches. 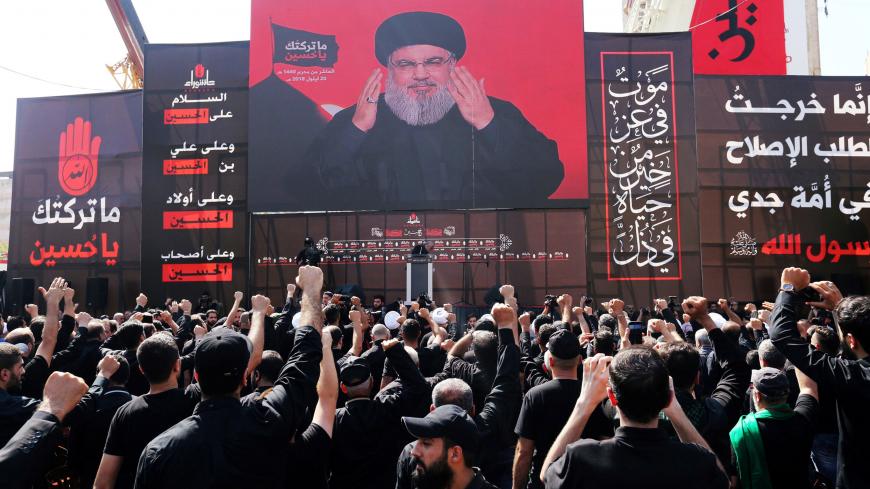 Lebanon's Hezbollah leader Hassan Nasrallah gestures as he addresses his supporters via screen during the last day of Ashura, in Beirut, Lebanon, Sept. 20, 2018. - REUTERS/Aziz Taher

After an absence of 77 days from the public eye since Nov. 10, Hezbollah’s Secretary-General Hassan Nasrallah had a three-hour interview Jan. 26 with al-Mayadeen TV. Decoding his messages might be key to understanding how Hezbollah will deal with major challenges ahead, most notably tensions on the southern border with Israel and its military intervention in Syria.

In a relatively subdued tone, Nasrallah had a measured posture, evading a direct provocation of Israel, overly accommodating Lebanese politicians and acting as a political commentator on Syria instead of being assertive, as he is known to be.

The timing of this interview seems orchestrated to fit the Iranian strategy this week to heighten the rhetoric against Israel after suffering successive airstrikes in Syria — most recently on Jan. 21.

Secretary of Iran’s Supreme National Security Council Ali Shamkhani was quoted Jan. 29 warning Israel that Hamas and Hezbollah are prepared to unleash an “inferno” against Israel.

There are, however, four noteworthy trends in Nasrallah’s interview.

Nasrallah went out of his way to ease the tensions with Israel. Beyond the expected attempt to establish deterrence by showcasing Hezbollah’s capability to strike when needed, he assured that Hezbollah made no decision to launch an attack on the Galilee. Nasrallah’s rhetoric was merely advising Israeli Prime Minister Benjamin Netanyahu not to alter the rules of engagement in Lebanon.

While Israel managed to outmaneuver Hezbollah on discovering cross-border tunnels, Nasrallah justified the Shiite group’s silence on this issue as intentional to avoid being lured into what he considered an Israeli campaign. Hezbollah’s leader remained ambiguous on whether these tunnels have been dug recently in an attempt to lessen their implications or relevance to any plan to attack Israel.

It is not clear whether defusing the tensions with Israel is based on advice from close Lebanese allies, instructions from Tehran or upon Russian request. But Nasrallah explicitly affirmed, “I am interested for him [Netanyahu] to calm down a bit,” and advised the Israeli prime minister to “be careful of going overboard in what you are doing in Syria.”

Netanyahu’s reaction to Nasrallah’s interview was also subdued, implicitly claiming that Israeli pressure forced Hezbollah to back down. The Israeli prime minister noted that Nasrallah is embarrassed that Israel exposed Hezbollah’s tunnel plans, by the financial distress caused by US sanctions on Iran and by Israeli determination.

Hezbollah seems invested in the current status quo on the southern border as Israel has been, in recent weeks, attempting to alter these dynamics — an attempt that was incidentally aborted by US officials when Israel sought to punish the Lebanese government for the existence of the tunnels.

On Hezbollah’s regional role, the interview showed how much Hezbollah’s demeanor and calculations have evolved when compared with a few years ago when the Shiite group threatened an open war against Israel and showed readiness to retaliate against Israeli actions in Gaza or Saudi actions in Yemen.

Nasrallah justified the restraint to retaliate against recent Israeli attacks in Syria as “a political decision based on managing priorities in this phase, not based on military deficiency.” This subdued tone shows how much Hezbollah’s regional role has dwindled and is increasingly restricted to Lebanon, as Russia and Iran are directly taking the lead on Syria.

Nasrallah gave the impression that Hezbollah does not decide what happens in Syria. He acknowledged that the retaliation against Israel is “obviously” a decision to be made by the “axis,” in a reference to Damascus, Tehran and potentially Moscow. His only affirmation was that an attack on Hezbollah in Syria will be met by retaliation in Lebanon, which is a shift from previous threats of simultaneously opening two borders against Israel.

This interview also shows how Iran is increasingly in full control of Hezbollah’s decisions when compared with the margin the Lebanese group had a decade ago. US sanctions on Iran made Hezbollah more reliant on Tehran for funding. Nasrallah spoke in this interview on behalf of the Iranian regime because his voice is heard in Israel and his threats are taken more seriously.

Nasrallah was cautious in addressing Russia’s role in Syria, sticking to the Iranian regime’s talking points despite the increasing cracks in the alliance between Moscow and Tehran. He indirectly acknowledged Russia’s role in regulating the tensions in Syria by noting that, “to be fair,” the Israelis are not trespassing on the rules of engagement with Iran in Syria and are not intentionally targeting Iranian officials in their airstrikes.

Nasrallah described how Moscow relayed with “sincerity” the US offer to withdraw Iranian forces from Syria and reaffirmed the stance that Tehran is not ready yet for a deal that synchronizes US and Iranian withdrawal from Syria. He linked any withdrawal plans to the end of the war against extremist groups, mainly in Idlib and northern Aleppo. Reluctantly consenting to Moscow’s role as mediator between Israel and Iran in Syria, Nasrallah noted that “Russia can give Israel a margin to act in Syria but cannot open all margins and let them go far.”

From a Lebanese perspective, Nasrallah announced that Hezbollah “stands behind” the state in all issues related to negotiating the land and maritime borders with Israel. He noted that Hezbollah will only intervene if Israel launches an attack against Lebanon.

Hezbollah feels comfortable with the positions taken by the Lebanese government and does not want to bypass decisions taken by President Michel Aoun and parliament speaker Nabih Berri.

Moreover, Nasrallah believes US officials are trying to drive a wedge between Hezbollah and the Free Patriotic Movement that was founded by Aoun. The last meeting of the High Defense Council showed the impact of US mediation that asked both the Lebanese and Israeli sides to show restraint on the border. President Aoun and Prime Minister Saad Hariri reportedly tried to make sure they have the final say in the Lebanese army’s decision to retaliate against any Israeli violation on the border, and they both agree with the US offer to negotiate the land border for now and delay discussing the maritime border with Israel — a view that is not shared with Berri or Hezbollah.

Most of all, Nasrallah’s interview shows that Iran is sending messages to Israel, the United States and Russia that it will not stand still for long and its patience might run out if provocations continue. Hezbollah is planning long-term for Lebanon and Syria and hence sees any short-term confrontation with Israel as a setback. Both Netanyahu and Nasrallah are facing domestic challenges (Israeli elections and the Lebanese Cabinet formation) and want to maintain their political leverage at home, which make them less inclined to initiate a confrontation that might trigger a regional war.